First Pheasant Hunt with my Daughter

Six-Gun Senior MemberEastern NebraskaPosts: 8,155 Senior Member
December 2014 in Hunting #1
This one is about 10 days overdue, so my apologies there. I got lazy when it came time to edit the video clips together.

Anyway, ever since I took her to Teach's place to deer hunt, my daughter has been begging me to take her out with her dog to go pheasant hunting. She's not going to be up to an 8-hour day of tall grass walking back in Nebraska for a few more years. I did some homework and found a pheasant preserve here in Ohio that features some really nice habitat and put-and-take birds for a reasonable price. We made it a date and she had a blast. So did the dog. For those of you unfamiliar with the shock collars and beeper systems available today, that hawk screech sound you hear periodically in the video is actually emitted by a special function of the dog's hunting collar. When he goes on point, the collar makes that sound to 1) let you know he's got a bird pinned so you can hustle over to him and 2) trigger's the bird's natural instinct to hold tight when it hears a hawk fly over for fear of being attacked. This buys you some time to get over to the dog before the bird takes flight.

The video was shot in 1080p high definition and is best viewed in fullscreen accordingly. Start the video, click the gear icon at the bottom of the video and select 1080p. Click the outlined box to go fullscreen. It takes a second for the resolution to enhance. 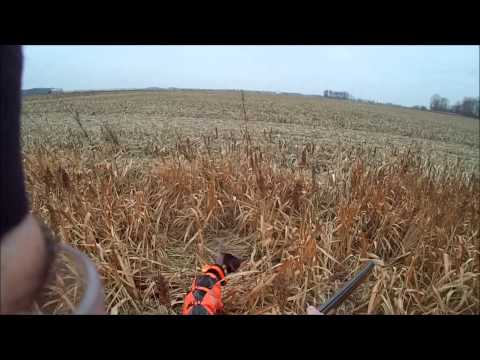 https://www.youtube.com/watch?v=z40haFoZ2mY
She is, of course, now begging to go back. I really can't wait until she's big enough to shoulder a shotgun on her own.