Six-Gun Senior MemberEastern NebraskaPosts: 8,155 Senior Member
April 2015 in Hunting #1
As many folks saw in Mary's thread, the turkey hunt this past Wednesday was a success. I wanted to share the pics and story leading up to that without cluttering up her post because there was a lot more cool stuff than just turkey hunting going on at their place.

First and foremost, let me say that I'm am perpetually amazed by the hospitality I've received when visiting their farm. They have given me a room, bed and shower to use without hesitation since my first time out their this past fall. Mary has gotten up before dawn to make me breakfast before my hunts, a favor that I would never ask of her but that she consistently provides. Jerry set me up with a caplock rifle to use during muzzleloader season and spent hours with me on the range tuning up my own flintlock rifle. He even let me tag along during one of his vehicle inspections and gave me a complimentary tour of the Huntsville area along the way.

As for their farm, it's definitely got a healthy population of native fauna. I came up a week and a half prior to my successful turkey hunt to try and score one and get the birds patterned. Their family friend, Elvan, had already set up a few blinds around the property and was kind enough to join me on this first trip.
While I didn't get anything on the first trip, I did get to see all of the blinds Elvan laid out before the season and got some birds patterned. I actually spotted the two jakes that ultimately came to my calling and decoys the next time out in one of the fields. I made a mental note of that area and the time they were sighted (around 11:30 AM).

This past week, I set up in the same field that I had last seen the jakes. One of the blinds is right at the corner of that field and it would only take minor coaxing to get them near it. I put out an Avian-X hen and half-strut jake decoy 20 yards from the front of the blind. Just before dawn on the day of the hunt, I head some gobbles fairly close (maybe 200 yards away) and used a mouth call to hopefully persuade the birds to show up and spot my decoys. At 6:30AM, they walked into the field, several hours earlier than I expected.

As soon as the birds spotted the decoys, they quickly went from curious to flatout pissed off. The presence of that jake decoy with an apparently receptive hen in the mix had them stirred up. The jakes transitioned from a curious run to a furious trot in a matter of seconds and were on top of the decoys in the blink of an eye. You can only shoot one bearded bird a day in Tennessee, so it was imperative that I allow for ample separation between the birds before I shot. I also spent a pretty penny on those semi-inflatable Avian-X decoys and didn't want to blast them, so timing was going to be critical.

A second or two after one of the jakes got in the clear, I blasted him with a 12 GA Remington Nitro Turkey #6 load at 21 yards. He folded right up. 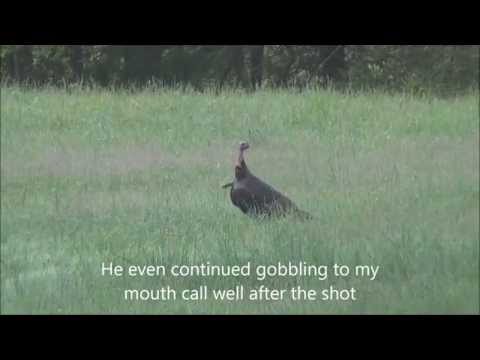 The other jake hung around and I toyed with him with my calls until he finally spooked out of the field a good while later. It always feels good to get it done early in the morning and have the rest of the day to relax. Thanks again to Mary, Jerry and Elvan for their help in making this happen!
Accuracy: because white space between bullet holes drives me insane.
0 · Share on TwitterShare on Facebook