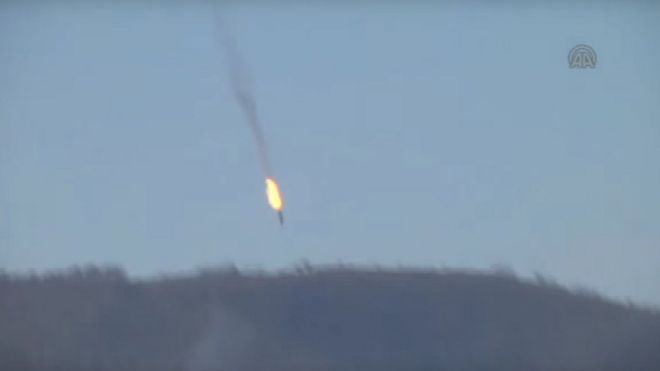 "Turkish warplanes have reportedly shot down a Russian military aircraft on the border with Syria.

Russia's Interfax news agency cited the Russian defence ministry as saying that a Su-24 had crashed in northern Syria, and that its two pilots had ejected.

Turkish military officials said Turkish F-16s had shot down the plane after repeatedly warning its pilots that they were violating Turkish airspace.

"The Russian defence ministry has confirmed its plane downed on the Turkish border, was an Su-24 fighter jet."

"Syrian activists have been quoted as saying that one of the pilots of the Russian Su-24 has been captured. He is said to be being held in the mountainous Utayrah area in Turkmen Mount, Qatar-based Al-Jazeera Arabic TV reports."

"Turkey is a member of the Nato alliance, which has said it is ready to defend Turkey if Russia violated its airspace"
0 · Share on TwitterShare on Facebook