One last doe on the ground to shut 'er down

I had one tag left, but had been bitten by bad luck with weather and finicky winds my last few times out. I even had a trespasser walk in while I had a deer in this particular meadow, something that has never happened to me before in Ohio.

Today was another day cursed by poor weather conditions. The winds gusts were breaking 20 mph and it was warm by our standards at 47 degrees going into the evening hunt. Not exactly ideal for deer movement. Regardless, I was hell bent on giving it my all and the good news was that the wind was at least going in a favorable direction. I really wanted to go 3 for 3 on kills for each season that I've owned my Parker Tornado F4 crossbow. After all, I had killed an early season spike back in this same spot with my compound under similar circumstances. Maybe I could get lucky...

Another issue I now had to deal with was that my tree stand is now completely devoid of cover in the late season. More than once, I've had deer come out and immediately see me up there. I tried the Ghost Blind, but there isn't enough space to set it up without risking collateral noise. So, it was time to go old school: I laid right on the ground, tucked into the brush line edge, with nothing but a tanned deer hide under me. The hide serves two functions: 1) it keeps me much warmer than laying on cold, bare ground and 2) it greatly muffles the sound of crunching leaves. Combine these traits with a very low profile and I have had some insanely close encounters with oblivious deer.

Conveniently enough, a deer walked in obliviously at just over 50 yards with plenty of daylight left and the winds finally calming a bit. She was totally unaware of what I was, but it's always challenging to work a deer that is at extremely close range when you're totally exposed. I got an initial range, held the rangefinder up to avoid further movement in her presence, and shifted about 45 degrees to face her approach when she got behind a tree. She got closer and went behind another, much closer tree, which I also lasered. I had to set up quickly for the shot and do so with consideration for some small twigs that could deflect the arrow. The safety was now off. When she came out from behind the tree, she was just over 20 yards. I had an extremely narrow time window to get the shot off or she would be into the woods to my left and gone for good.

As soon as she emerged, I lined up the shot, got my finger on the trigger and fired. The impact of the arrow was so loud that I thought I might have missed! It was as hard and loud of a "THWACK" as I've ever heard from an arrow strike, to the point that it sounded more like hitting a branch or a rock. However, at impact, the deer darted back from whence she came with her tail tucked between her legs...always a good sign. I tracked a good blood trail down a hill through heavy woods and found her about 130 yards away. The shot was picture perfect and the old, reliable 125 gr. Slick Trick Magnum did its job wonderfully.

It made for an awful, steep uphill drag, but I wasn't terribly upset. This is my 7th deer on the season, a milestone that I am very happy to see come to fruition.

The entirety of the hunt was also caught on video. Definitely view the video on YouTube in full-screen and max out the resolution. It's tough on that little video camera I use to keep the action in good detail with that much clutter in the shot: 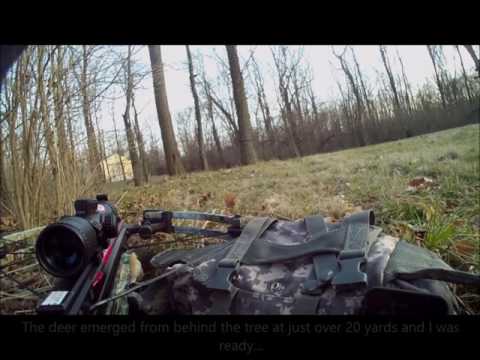 Sadly, this is likely my last Ohio deer hunt. As my military career goes, I am all but certain to move this coming Summer. It's been a fun time here, and given me three deer seasons that I won't soon forget.
Accuracy: because white space between bullet holes drives me insane.
0 · Share on TwitterShare on Facebook