Montana hunt 2017: 3 deer with 3 different military weapons (and some grouse)

Six-Gun Senior MemberPosts: 8,155 Senior Member
November 2017 in Hunting #1
If I've learned anything about Montana over the years, it's that it's just too easy to get it done. There is a boatload of opportunity to kill deer in this state, and getting a nice representative of what you’re after requires nothing but some research and a little bit of patience.

This year, I decided to add some challenge to the adventure. It was not going to be about getting a nice buck like the previous year. This time, I not only wanted to blood three rifles in three different chamberings that I've never previously used on big game, I wanted to do so using relatively short range capabilities. So, I brought along the following weapons that saw military use across three different centuries: Each hunt was special in its own way and created lots of great memories. I also had the additional challenge of guiding a new deer hunter to filling his two tags while trying to fill all three of mine, but if there was any place where it could be done, it was here.

.50 cal flintlock hunt
I was drawn for a mulie doe tag coming into this trip. Conveniently, I spotted one on BLM land in a perfect position to put on a stalk. She was feeding in a meadow with a hill base providing perfect stalking cover. Even better, there was a heavily used game trail running over the hill just a few feet up, providing a clearing through the grass and a great shooting rest.

The only minor issue I faced was that I had lost my FFFFg priming powder from my priming tool a night earlier due to the feeding tube unscrewing itself. Thankfully, I had already tested the gun using the same FFFg powder as used in the main charge and was confident I could get reliable ignition. So, off I went to give it a go.

I made my move, crawling up to the game trail on the hill and closing the gap to just 52 yards. Undetected, I carefully eased the flintlock over the clear opening and pulled the hammer to full cock. A quick squeeze of the set trigger had me ready to fire.

At the shot, an enormous smoke cloud billowed out, obscuring the deer. Strangely, she ran toward me, and I had no clue if the hit was good. She got about 20 yards away, stopped, and looked over her shoulder back to where I shot at her. A few more seconds went by and she tumbled backwards. Score!

My doe from the exit wound side: 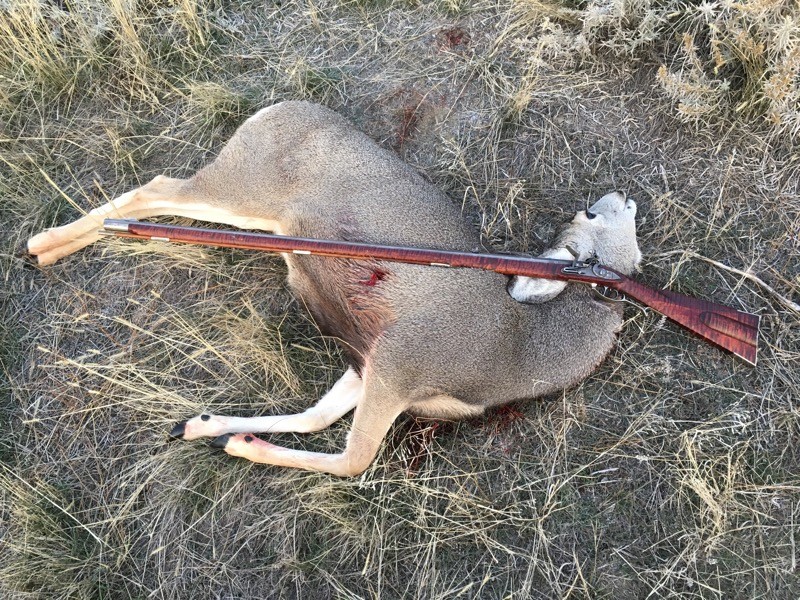 The entrance wound was blocked by hair. I swirled it around the hole, so you can make out where the ball hit: 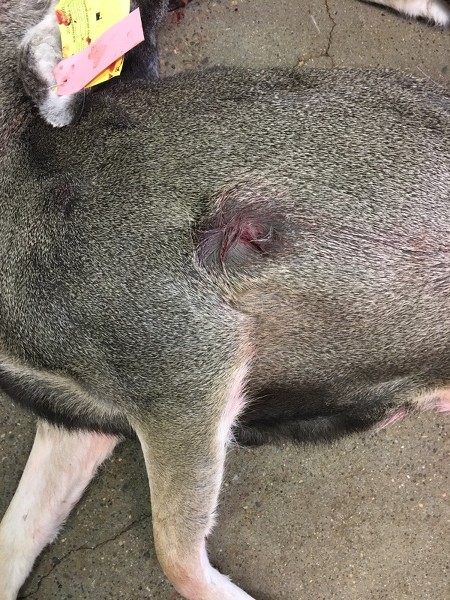 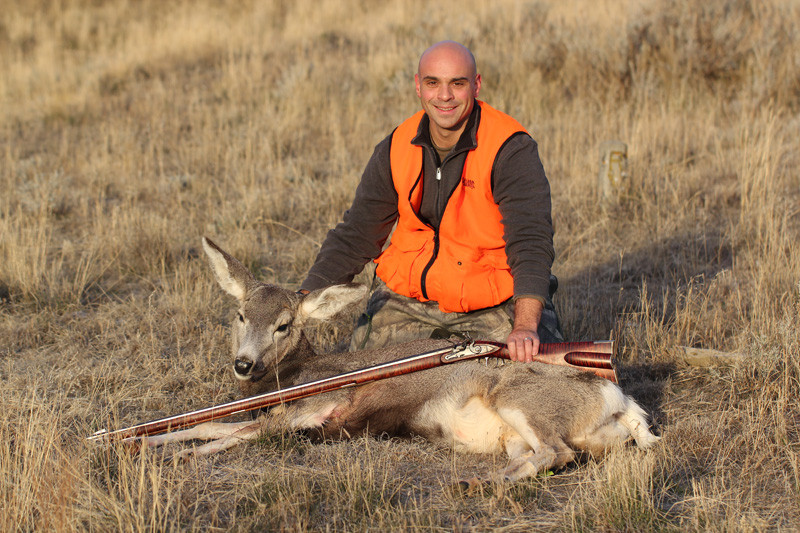 Another hunter from my group came along with me after we spotted a pair of whitetail does at the top of a ravine. We both had whitetail doe tags and decided to go in. As it turned out, the deer were on the far side of the ravine and there was no easy or fast way to get closer. I decided to let him shoot with his .300 WSM and get my chance later. He shot and dropped his doe at 200 yards.

As the other hunter gutted his deer, I decided to explore the ravine and see what else was in or around it. Within 10 minutes, I saw a 6-point whitetail buck entering the ravine just a couple of hundred yards away. That offered a good chance to fill my general deer tag. I waited for the buck to get behind some heavy brush in the trough and quickly moved to a hole in the trees facing the game trail that I presumed he would follow. I was banking on him taking the easy way up...and he did.

As soon as the buck got into the hole I was facing, I bleated loudly and got him to stop. The iron sights were now set at the proper holdover for the shot. I fired, and the bullet closed the 82 yard gap at a slow, 1,250 fps pace, quartering right into his chest. I came down off of recoil in time to see the buck drop and tumble into the ravine. My first batch of custom cast bullets got the job done. 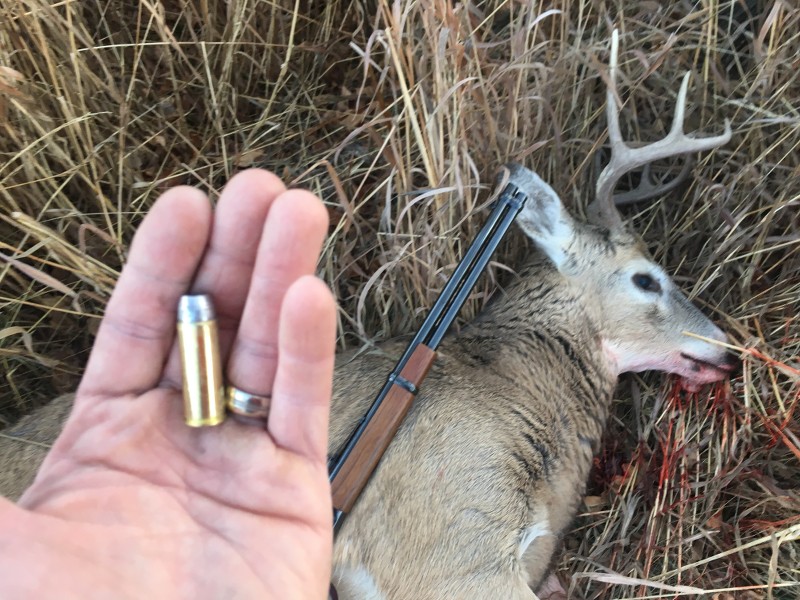 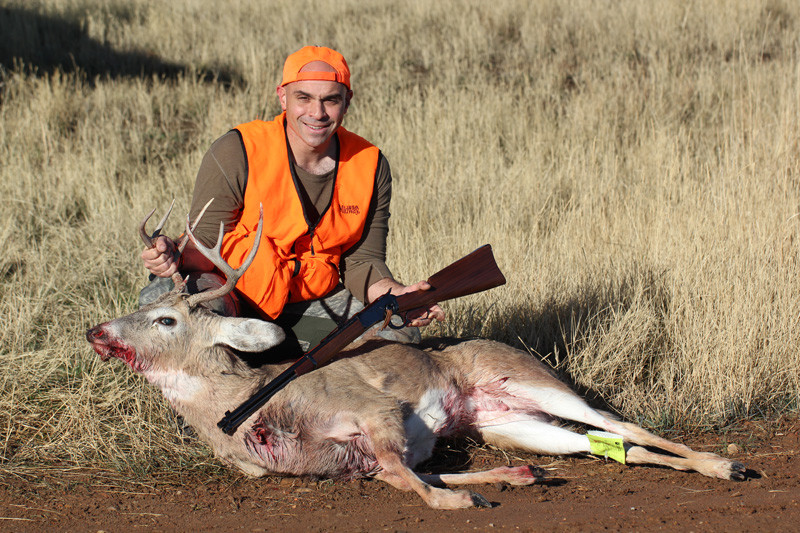 My last task for the trip was to finally fill the whitetail doe tag that I missed out on filling earlier in the hunt. That left the AR-15 in 6x45 as the weapon of choice for the job. I drove past a familiar canyon that held whitetails and saw a group of young does before I even made it to my intended hunting spot. I parked the truck, chambered a round, and put on a stalk to the canyon's edge.

At this point, it was as simple as putting the crosshairs on one of the does and squeezing the trigger. Interestingly enough, this doe was at exactly 82 yards, just like my lever gun buck. The bullet struck and the deer bolted about 40 yards before going down. The 85 gr. HPBT Sierra GameKing left a bullet-sized entrance hole and a dime-sized exit, completely penetrating and killing quickly. It was very cool to see that little projectile perform so well on big game. 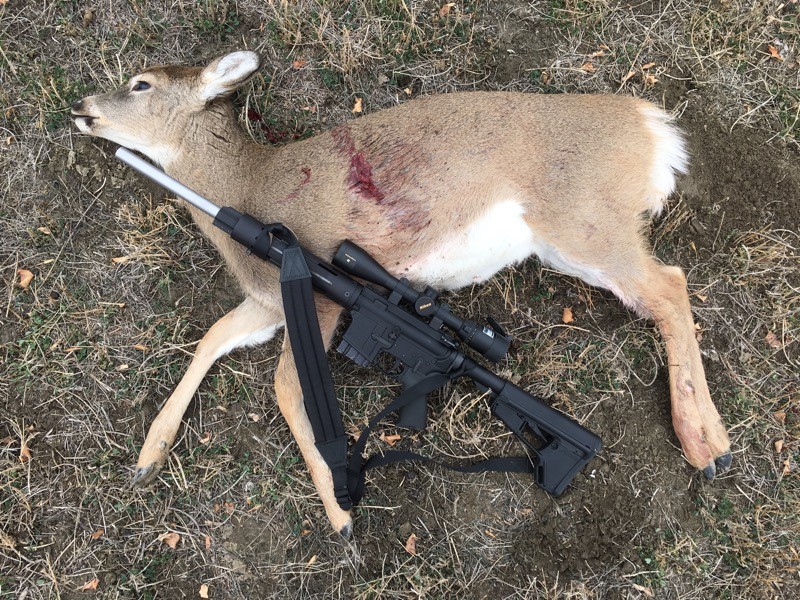 Quest complete: without firing a single shot over 82 yards, I took 3 deer with 3 different rifles representing 3 different military eras. All of this in just 4 hunting days, several of which were spent concentrating on helping my buddy fill his tags. Oh, and he did just that. He filled a whitetail doe tag and scored his first mule deer buck.

Another thing I've learned about Montana is that you should NEVER show up without a shotgun. Last year I killed a big Merriam's turkey after my deer hunt because I had one handy. With this year's big game tags spent, I decided to go hit some draws where I had seen sharptails flush several times in the past. My new deer hunter friend came along for kicks and to see if he could also get a bird. A Montana deer combo license includes upland privileges, so why not give it a shot? We had no dog, but we had two good feet and two good bird guns. I loaded up the Benelli Super Black Eagle II with some Remington 2.75 inch #5 shells and headed to the public land where I saw the birds flushing.

Within 70 yards of walking along the first draw, I had my first bird down. At the end of that draw, me and my buddy watched in amazement as the biggest flock of sharptails I had ever seen flushed about 100 yards in front of us. I can't tell you how many we saw for sure, but we can say with conservative confidence that it was at least 60-70 birds. In my mind, there still had to be more on the ground, so we started heading toward where the big flock departed.

It didn't take long. Just 20 yards later, I spotted pair of grouse frozen still behind some sparse, calf-high grass about 4 yards apart. I told my friend to get ready to shoot the bird on the left when it flew, as it was on his side. We got a few steps closer and the birds flushed. When they did, the bird on his side immediately flew directly next to mine. I fired first, and when I did, I ended up doubling up and taking both birds down with one shot. I felt bad because I now had three birds and my buddy had none, but he was too excited to have witnessed a very rare upland bird double kill to be upset.

We continued through the grass toward a tall, somewhat steep knob that was capped with a few large rocks. When we got within a couple hundred yards of the knob, I noticed not one, but two different grouse playing lookout from the rocks and staring right at us. They weren't overly concerned yet, so we kept way wide of them and made a play to get behind them for a sneak attack. We got out of sight and slowly climbed the knob until we broke the top edge. At that moment, the first lookout bird flushed, but no others. Then, we got a shade higher and the front lookout bird flew, cuckling the whole way out. It was a long shot, but I led it by about 6 feet and dropped the grouse instantly, completing a 4-bird limit. I had never killed a sharp-tailed grouse before this day, but by some crazy miracle, I had just limited out. Talk about feeling grateful! It just added to the list of reasons why I love hunting Montana. 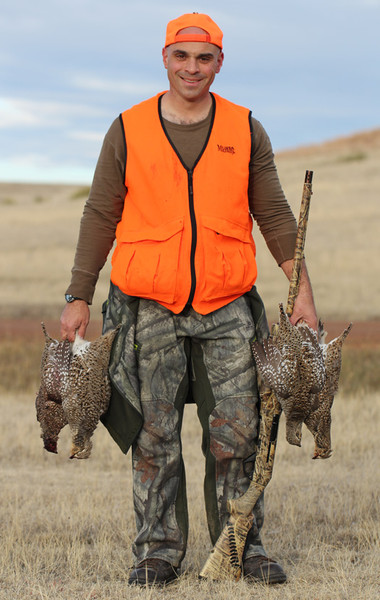 I love those weird "hair" feathers on their legs/feet: 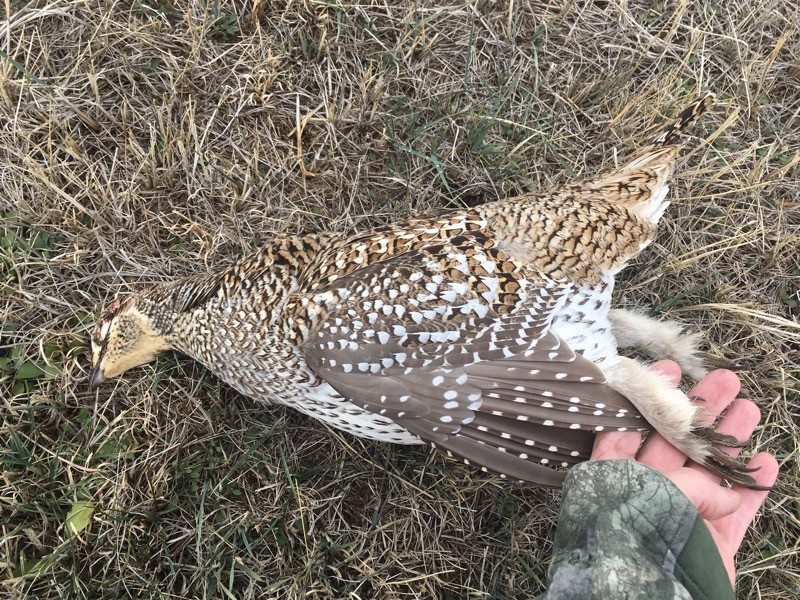 Sadly, more birds flushed as we climbed a little further over the knob, but they were almost all on my side. My friend took two shots but missed both and never got a single bird. He was not too upset because he saw a LOT of activity for his first sharptail hunt. It was much better than sitting in the hotel room.

Oh, and a local fellow taught me how to tell a male sharptail from a female. They are a tough bird to sex unless you know what to look for. The male birds show a yellow feather tuft when you pull up on their eyebrow. The females don't have that. See below; the top bird is a female and the bottom bird, a male. 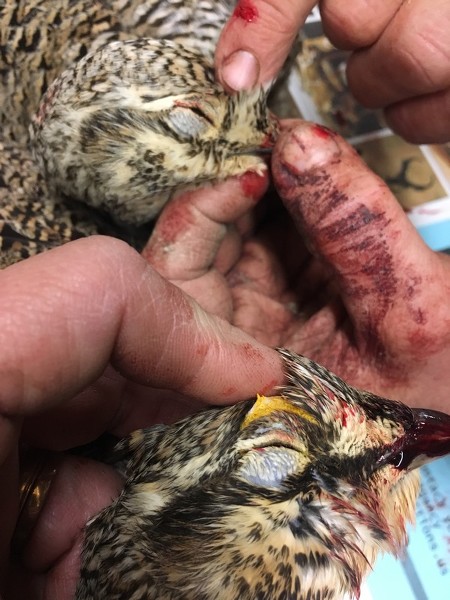 So, we leave tomorrow after another fantastic year out West. It went by so fast and we're actually cutting 5 planned days off of the trip because we tagged out so quickly. Everyone wants a little more time to get ready for Thanksgiving, but none of us regret the time we spent in this great state. We'll be doing it all again next year.
Accuracy: because white space between bullet holes drives me insane.
0 · Share on TwitterShare on Facebook