Six-Gun Senior MemberPosts: 8,155 Senior Member
January 2018 in Hunting #1
Ok, mild exaggeration...BUT, I did have one exceptionally pissed off goose try its best to take me out.

It started with another big, snow-blown cornfield decoy setup with a couple of friends. The Platte River is pretty close to this spot and a LOT of birds were moving in our area as they are getting more and more desperate to find open water. They are also desperate to find exposed food sources, so we took rakes and cleared a lot of dirt patches and waste corn husks, creating the appearance of an active feed to trafficking geese. It was very effective.

So, like any good-spirited hunter, I proceeded to knock a few down. The second one came down pretty close to my blind, and it appeared quite dead at impact with the earth. As I went to retrieve it, another flock started working our decoys, so I dropped the retrieved goose next to my layout blind and climbed in quickly. The group that worked us broke off and flew to a different field, so I opened the layout doors and sat up to start scanning for more birds.

As soon as I sat upright, I heard something hissing extremely close to me. I looked to my left just in time to see a reanimated zombie goose bull charge me! It literally tried to climb the layout door to get inside and give me a good pecking at point blank range. I had to engage in close quarters melee combat with my shotgun barrel to keep him out. My buddies were useless to me, laughing uncontrollably as I struggled to get to my feet and buttstroke the enraged goose to its final demise. This was definitely a first... If only one of them had the sense to fire up their phone and get video, it would've been a prize for the ages.

After subduing the feathered fiend, we shot up some more, thankfully without further incident. Ended up with 9 for the day/3 a piece. Definitely a good hunt given that we didn't even get setup until after 2PM, and that I came home with both eyes and all of my digits after the avian assault. 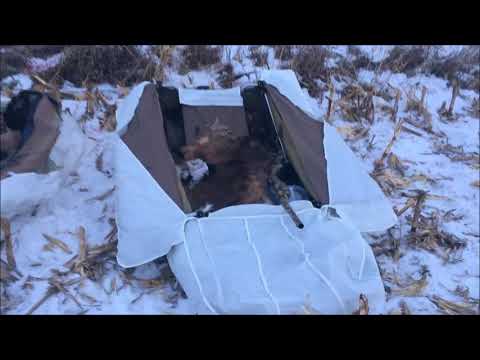 When a goose drops at the shot from 30+ yards up into snow, it makes for a pretty spectacular impact crater and surrounding blood splatter: At these low temps, blood hardens rapidly into solid bits that are a bitch to conceal and stand out proudly to other birds working the decoys. It doesn't take much to flare educated, late season birds, so much of our time was spent trying to bury these little red balls after a salvo: Speaking of blood, the snow cover on my layout is gonna need some laundering: My friend is a really big boy, but with a little bit of ingenuity, some bed sheets and a sewing machine, he made himself a really nice set of button-down snow covers for his cold weather bibs: It was a rewarding ride back to the trucks: