Zee Senior MemberPosts: 27,573 Senior Member
January 2018 in Hunting #1
My friend had told me earlier this fall that he was going to let my boy shoot an Axis this year. I figured it would be a spike or a doe. Last week he mentioned it again and that he wanted it to be a decent buck. Not one of his monster trophy's, but a decent buck. WOW!! I was just expecting a doe!! I told him my dad was coming to visit from out of town this weekend and wondered if we could do it this weekend while he was here. He said that sounded like a great plan.

He came into town on Saturday morning and we headed out to the ranch to hang out and cook ribs. 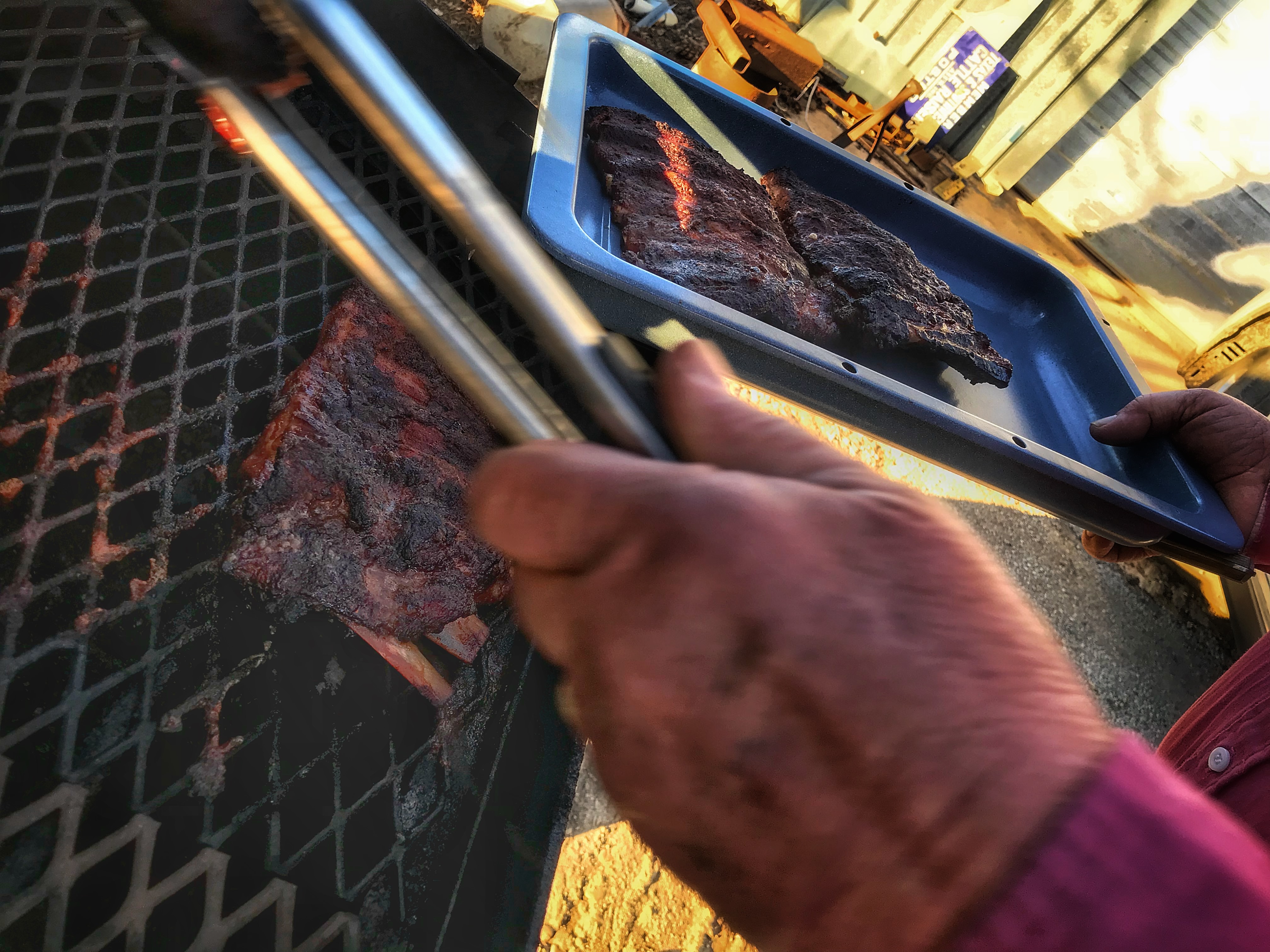 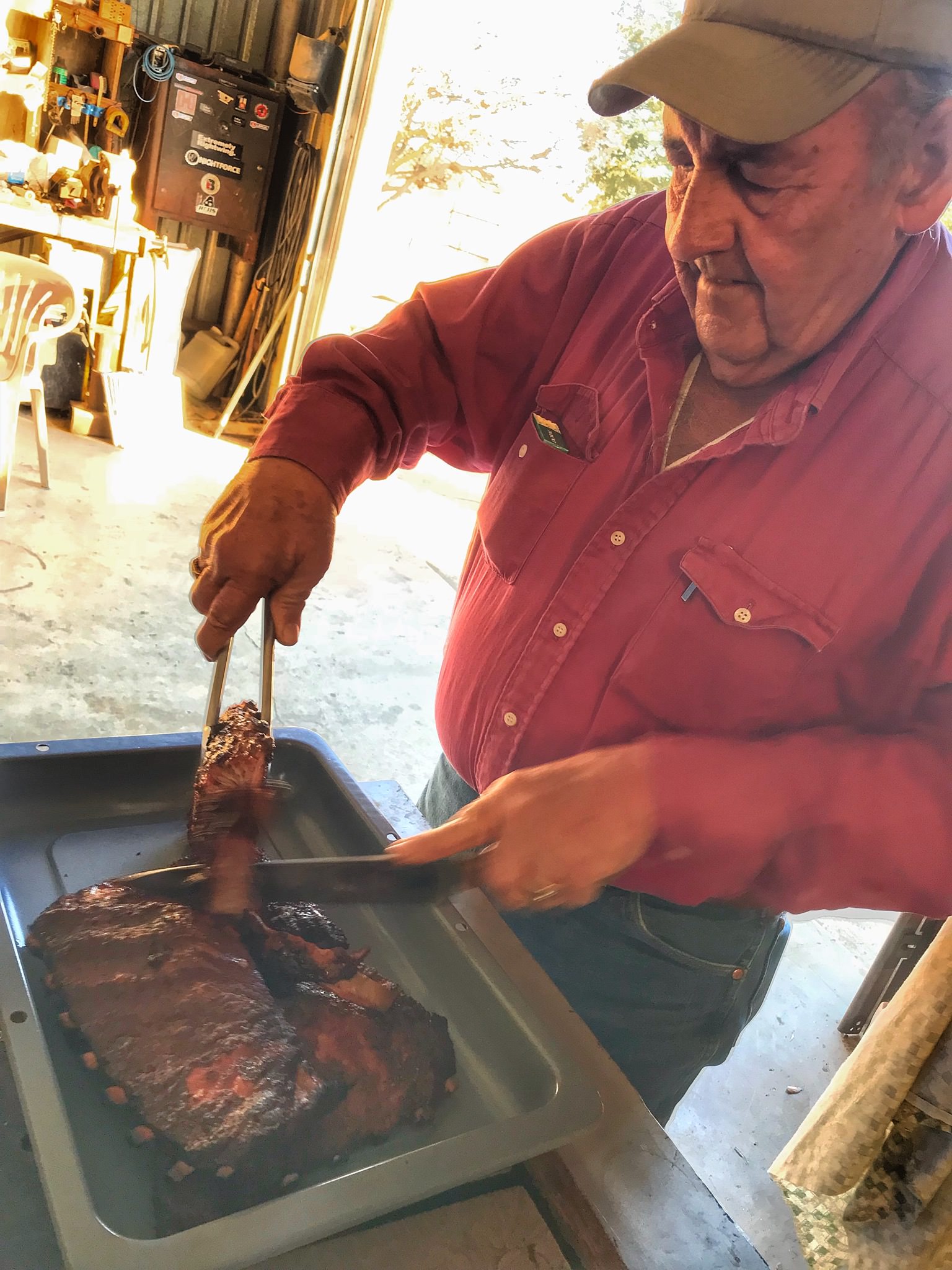 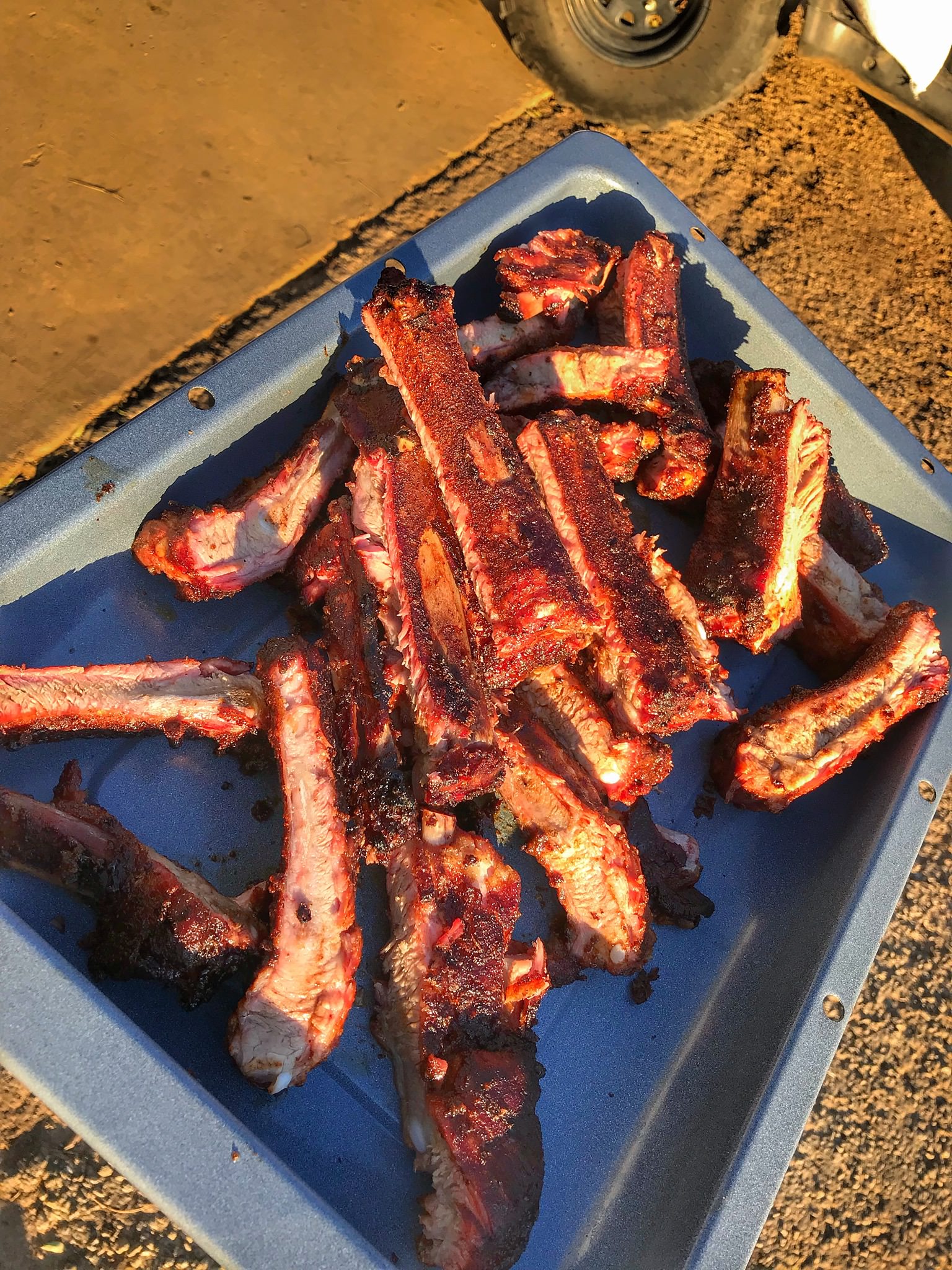 Which were the best damn ribs I've EVER tasted!!! They get better every time.

The plan was to go out Sunday afternoon and try for a buck. If that didn't work, we would have Monday evening for a last try.

Sunday around 3, we got to the ranch and confirmed zero with the custom 18" Remington 700 w/Krieger barrel in .243 Winchester that he has used for all his deer. I switched back to the 105gr A-Max after he used the 95gr SST on a whitetail doe earlier this season. With the gun zeroed, we headed to the hills.

Set up on a hill overlooking a plateau where we had put out corn. After awhile, the deer started arriving. Whitetail and Axis does and bucks flooded the area, but, the only Axis bucks to show on the plateau were a spike and a big trophy buck in velvet. The later paraded around, back and forth like he knew he was safe. About 4:30, I looked across the valley to the opposite hill and saw a herd of Axis on the far ridge. About 5-6 bucks feeding along the ridge.........and ours was in that bunch!!! But, he was 640 yards away. Too far for my boy to try a shot at this point. Our only option was to hope they traveled down the hill to a water trough and then maybe into the plateau.

Time passed and more and more deer came into the plateau. But, no shooter Axis buck. My boy began to ask if I thought the one he could shoot would ever come out. I told him that I hoped so, but if he didn't we could try again tomorrow. Finally, after about an hour, I saw a buck exit the brush on the far side of the plateau and walk up to water at the trough. I looked back at my friend behind us and asked if that was the one. He gave me a big smile and a "thumbs up". Game on!!!

Of all the bucks in the herd, ours was the only one to come to water. What luck! But, he was still 250 yards away and I wanted him to come closer. After water, he began to walk out into the plateau. Hoping he would come to the corn we laid out at about 100 yards where all the other deer were feeding........we let him come. Unfortunately, he hung up at 152 yards and began to destroy a tree. I thought he would be quick about it and then continue our way. Nope, he was pretty PISSED at that tree. One side to the other, he thrashed that sucker. Even standing up on his hind legs to get the tall branches, he was shredding and tearing branches off. The sun was setting and it was getting darker.

I asked my boy if he felt steady enough to shoot him at sitting, using the SpecRest, at 152 yards. He said he thought he could. Aiming in, he said, I don't know........I can't stop shaking.

I told him to relax and breath. Try to get steady and aim in on the spot we had talked about. He would aim, the come off the rifle. Aim, then come off the rifle. I told him if he didn't feel comfortable with the shot, we could wait and see if he came closer. He said he could do it and got back on the gun. The buck kept moving around as he destroyed the brush. He was broadside to slightly quartering towards us. I said to wait for him to pause from moving and send the round.

Watching him through binos, I saw him stop killing the tree and raise his head to sniff a branch. Thinking now was the time, I heard the rifle shot and saw the bullet hit his chest. Just behind the shoulder. He lurched forward and trotted a short ways. Stopping again to stand motionless. My boy reloaded the rifle and I told him to get back on the buck in case we needed to shoot again. The buck stood splaying his legs for balance for about 5 seconds, then...........toppled over backwards. Kicking on the ground until..........still.

And the coolest part, my dad was sitting there with us on the ground. Looking over my boy's shoulder the whole time. And my friend was behind him as well. Not a bad way to spend an evening. 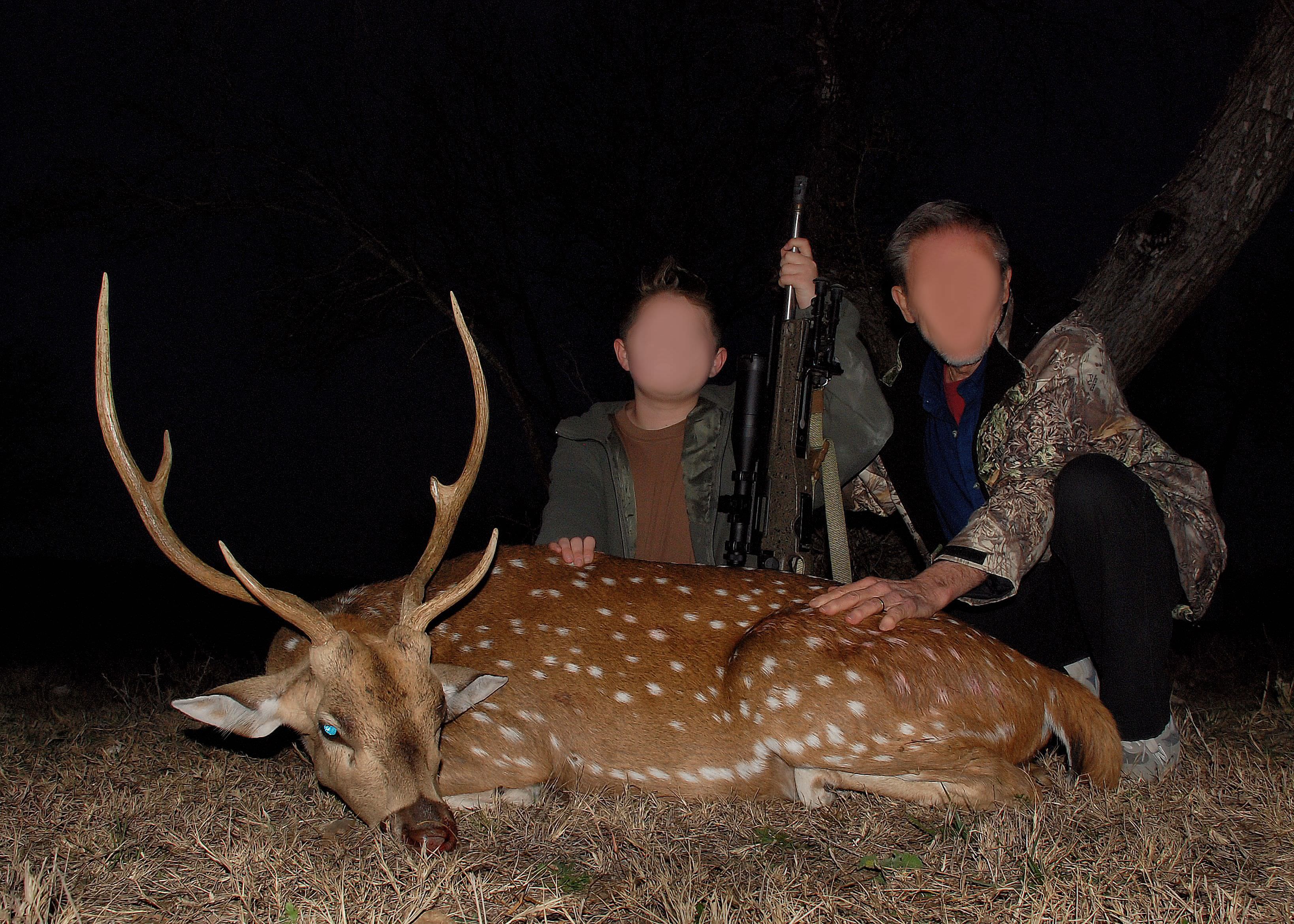 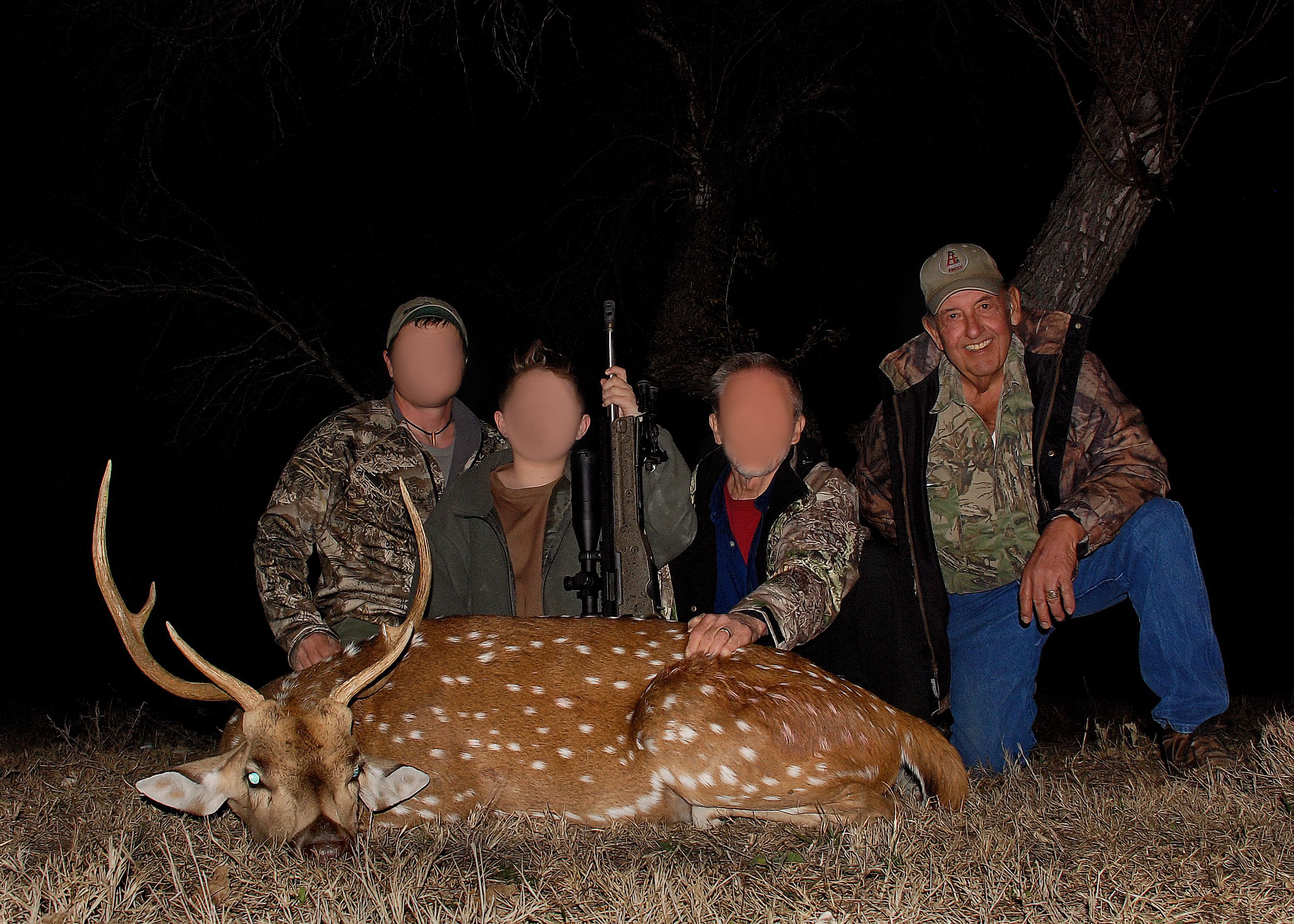 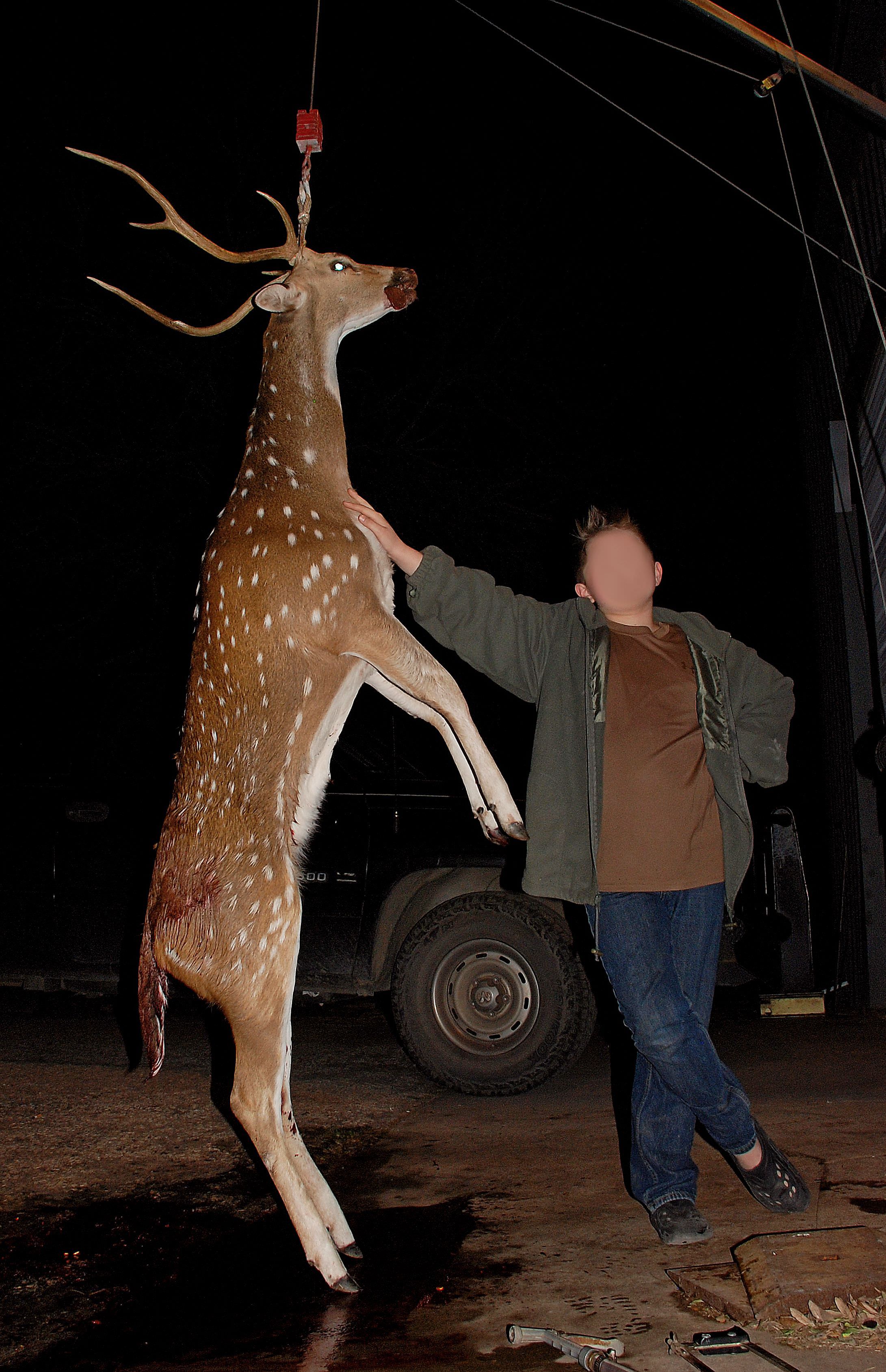 The bullet lodged under the hide on the off side in a perfect mushroom. Breaking 1 rib on entrance and 2 on exit, hitting the lungs and shredding the liver, it retained 46 grains of its original 105gr weight. Not bad for a match bullet.

I'm a proud father, with a proud "Papa", an proud friend, and a happy boy.
"To Hell with efficiency, it's performance we want!" - Elmer Keith
0 · Share on TwitterShare on Facebook
«12»