Varmintmist Senior MemberPosts: 7,946 Senior Member
May 2018 in General Firearms #1
Since I got to launch a couple out of the daughters new Ruger I figured I would give a first impression.
Size: It is a compact, in the hands of someone with small paws it is a good fit, for someone with bigger hands, it fits like a compact. I didnt care for the grip extender on the bottom of the magazine. It hit me in the wrong place and my grip wasnt comfy. After firing, we changed it out for the regular base and that felt better and it seemed to not print as much under her shirt. Definitely a personal preference as to hand fit. We will see if she likes the flat mag base or she goes back to the extended.
Grip: Small, but adequate. Feels better than the PF9 (sorry, only have one dinky pistol to compare it to) more real handgunish feel to it.
Trigger: For a Glockishly bad trigger, it is average for the bad triggers that the manufactures tell us we need now, and long (start the pull on Mon, listen for bang on Tues.) I think the Springfield bad triggers are better than the Glock bad triggers and the Ruger bad trigger is comparable with the Glock. Yes it is personal preference.
Accuracy: We ran some Blazer 115 out of it, and some old 124gr Norinco that I have been using up for years. Both hardball, both shot to the same point. The first round I fired I hit a 12 in steel plate at 25 after the daughter didnt hit anything in 4. I hit about 4 L and 3 H so we knew it wasnt the pistol. We choked up to 15 yards and she dinged it 4 times. Then stopped hitting it. I got some paper out and watched her from the side. She was pulling the muzzle down. Still is, but not as badly. Part of it is a function of her grip, the other part is the crap striker Glockish trigger. By the time the striker is released, her finger has moved so far her grip is changed. It can be worked through in time once we figure out what part of her finger will let her pull that distance straight to the rear without moving her hand.
Conceal-ability: It is the same size as my PF9, a touch fatter. She just tried some waistband spot, it hides nice appendix carry and SOB carry and she was wearing a tight shirt. Prints some at 3 and 4 oclock that could be dressed for.
Function: Ate everything so far. 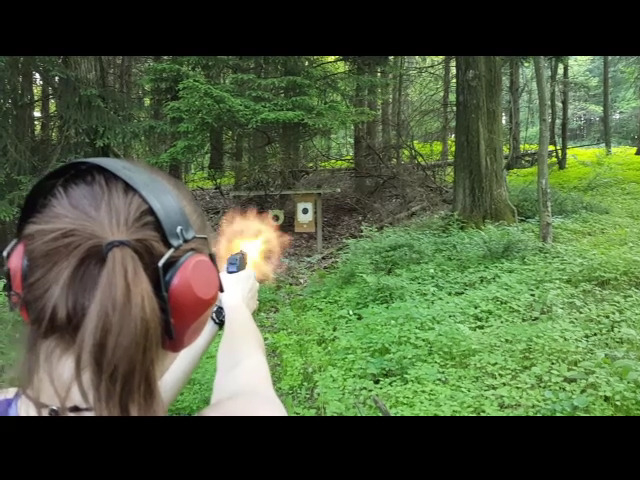 Happy factor: The kid is pleased.