orchidman Senior MemberPosts: 8,221 Senior Member
June 2018 in Hunting #1
Last year Paul sent me a Knife which he made. Unfortunately due to circumstances I didnt have the chance to 'blood' it until now.
Here is a pic of the knife as it looks now........... 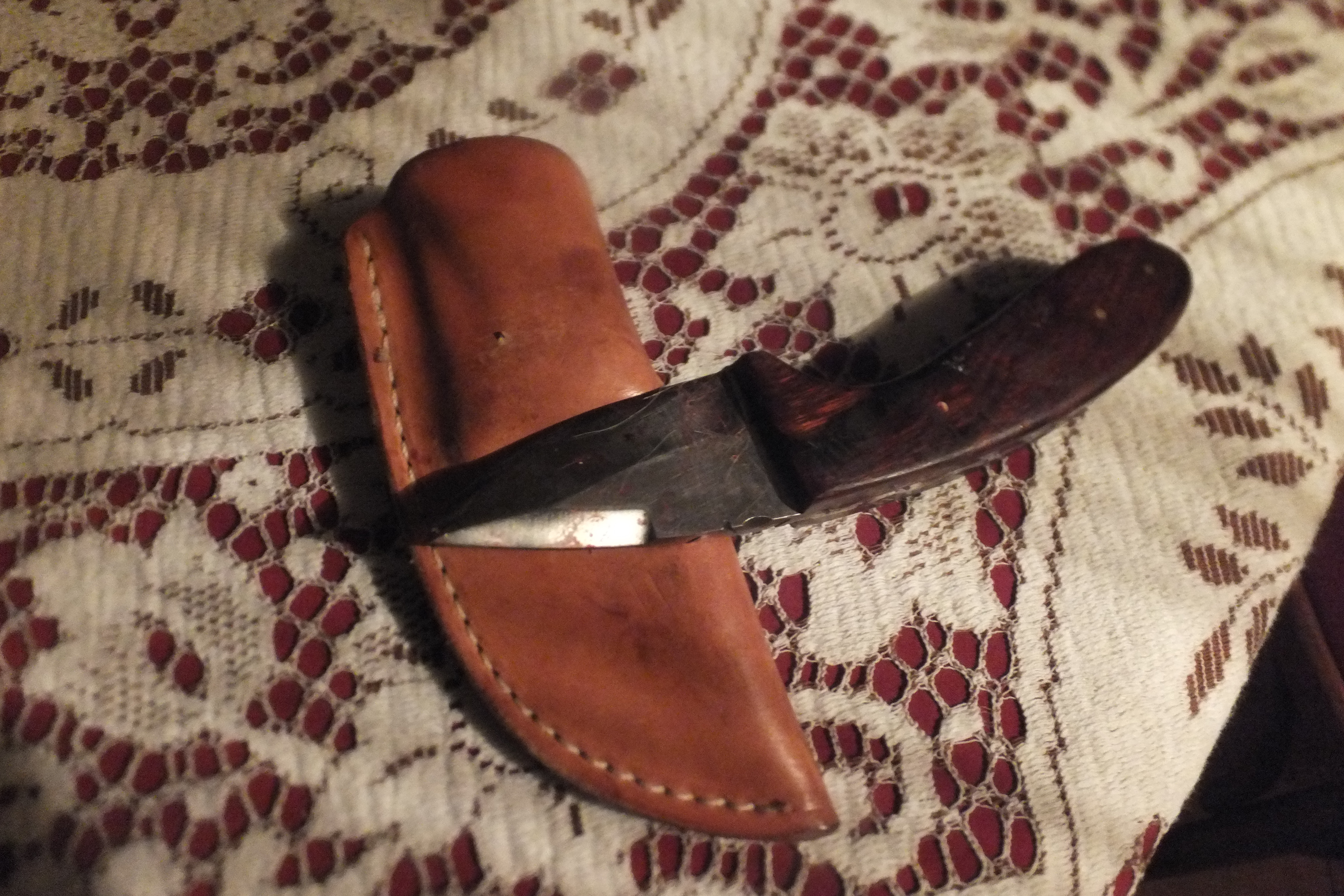 As you can see, there is blood on it...........Some of its mine, cos I sliced open my thumb with it and some of it is from the Fallow spiker I was field dressing at the time!!!
I now consider it well and truly blooded..........lol.
Headed up to Bloodhounds forestry block to have a wander. Some of the pines had been harvested earlier this year and, as they are going to be replanted in a couple of weeks the object was to cull as many bucks and spikers to minimise damage to the seedlings, ( Bucks will destroy seedlings by rubbing their antlers when they are in velvet)
First dilemma was deciding which rifle to take.........Passed over the 222, 243, 7mm08.........and picked out the Howa in 204 figuring it needed an outing. Bh went with his trusty Sako Vixen in 222.
Unloaded the quads and headed into the block. As we rode through the cutover I saw 3 peacocks 'heading for the hills'.
After stopping the bike , untying my rifle bag and getting the Howa out, finding the suppressor and screwing it on then finding the ammo, they were halfway back up the hill before I was ready. Using the bike as a rest I managed to send 2 45gr sp's on the way and dropped them both.
Here is a pic taken from the birds looking back downhill to the quads........

Magnificent looking birds and while their tails lacked their full plumage, they still looked spectacular. Here is a closeup of an 'eye'........

I will be hand plucking the tails and selling the feathers to local florists........currently they are going for up to $3.00 each and there are between 30-50 on each bird.....
After parking the bikes I dragged out the M1 Carbine to run a few rounds through it...........actually, more than a few. Sent about 40 rounds down range at various sticks and clumps of earth. Will post up a separate report about that.
It was getting late so we headed out to find a deer or two.
We split up after making plans and while I climbed up through the pines, Bh headed up a ridge about 80 metres away. When I reached the head of the gully I poked my head over the opposite ridge and scanned the area. Not seeing anything I continued to move to the crest to increase my view..........then I noticed a deer looking object that was hidden under the ridge.........As I raised the Howa to check it out it got up and ran along with a doe. I watched it until it disappeared, thinking I had blown it.......but the gods were smiling as they both did a big circle going out of my sight for a few minutes before reappearing heading up the gully I had just walked.
They must have scented Bh cos they turned and came up the hill towards me heading for the thick native bush. Mindfull of BH and where he was I let them continue until I was sure he was well away from my line of fire, and when they stopped I drew a bead on the yearling spiker and sent a 45gr sp into his neck.....just as he moved. I heard the hit but he ran about 15-20 metres before hitting the bush line and going from sight. I walked over and found fur and blood where he was standing and followed the blood trail to where he had gone into the bush. Bh joined me and we continued to follow the blood trail over a ridge and as we entered the bush Bh saw him about 20 metres down a bank. As I climbed down to him he tried to get up so Bh sent a 55 gr psp into his head to finish him off.
Now I finally get to 'blood' Pauls gift. As I started to open him up,I managed to get my left thumb in the way and sliced it open.....That wasnt exactly how I intended to blood the knife ..........Lol.

The knife performed flawlessly and was easy to wield...........and razor sharp I might add. I normally carry 2 knives with me, one for opening the body and a much thinner slim profile blade for severing its anus.........but this knife did both tasks with ease.
Many thanks for the kind gift Paul, it will be standard equipment in my pack from now on and I look forward to using it in future.
Note to self: It is possible to have too much scope. The Howa has a 6-18 Leupold and at 45m the field of view is too small. My shot severed the windpipe and the major neck arteries causing a large blood trail but missed the neck bone.The movement as I fired was the spiker turning his head to look back at Bh. Next time I decide to use a 204 for 'close' hunting I will take the Ruger with its 4-12 power scope and leave the Howa in the safe.
Still enjoying the trip of a lifetime and making the best of what I have.....
1 · Share on FacebookShare on Twitter
«12»