So.....a little over 3 months ago, my doctor gave me a prescription for a nebulizer, so I can take breathing treatments at home. I hit several medical suppliers before I find one that takes Aetna insurance, the provider my company switched to. I give them my insurance card and they bring out a sealed box, a Philips Respironics nebulizer. The woman taking care of me takes the box and goes in the back room and comes out a few minutes later, carrying the empty box, the compressor, and 2 nebulizer sets, one disposable and one reuseable. A nebulizer set has a medicine cup, mouth piece, and tubing. She starts to tell me how to use it and I tell her I got plenty of experience with them, when I was in the hospital, with pneumonia. I leave, with my new toy, the sun's shining, the birds are singing, and everything is right with the world.
Skip ahead a month, and I get a bill from the medical supply. Seems I haven't paid out my deductible on my insurance and they wouldn't pay for the nebulizer. The bill was for $206 and change. I was PO'ed and shocked at the price for what amounted to a glorified fish tank aerator.   I didn't have a spare $200 handy and, online,  the same nebulizer, from a certified Philips dealer, was $40 and shipping.

This irked me. Last week, I decided I needed to get it taken care of, so I checked the claim on my insurance account, to see if I could get it lowered. The itemized bill they had showed that they were charged:

Wait a minute.......I got the box the nebulizer came in and found the contents, printed on the box. 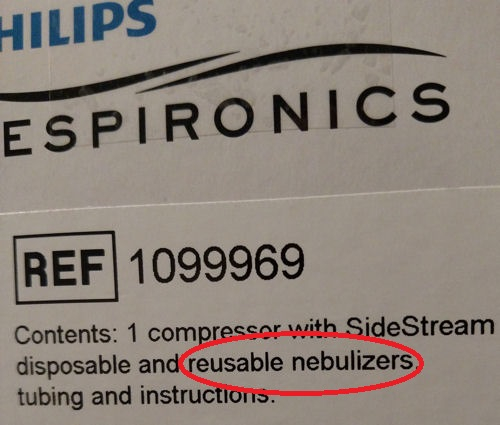 OK......they opened a sealed box, removed one of the enclosed items, and was charging for it. Is this even legal?

I started calling around, trying to find out if this was kosher or not. I ended up talking to a lady with Consumer Protection, at the Kentucky Attorney General's office. She told me she wasn't versed in the ways of medical equipment sales and the people who were, were out for the weekend. She was, also, shocked at the mark-up on the cost. She suggested that I print out all the info I had and go to the dealer, to see if they might negotiate a better deal. If we couldn't come up with a cost the we were both happy with, hold off paying, go to the AG's website and fill out a consumer complaint. She said her department would contact them and see how things went. So I headed to the supplier, locked and loaded.
I walked in the door and was met by a young black man, who was obviously the new guy, and he asked if he could help me. I told him I had a bill and I need to talk to somebody. Over his shoulder, a middle aged guy was walking our way and picked up the pace, when he heard what I said. He told the young guy he'd take care of me. We sat down at his desk and I showed him my bill and told him I'd found the same unit, online, for $40. He said that they dealt with Medicare and insurance companies, who had set prices for such things and they had to go by those guidelines. I then asked him about charging me for a nebulizer that came in the sealed box, with everything else........when I heard his answer, I was absolutely gobsmacked. He actually pegged the needle, on my BS meter.
"We pay Philips to put the reusable nebulizer in the box, so we will be sure to have one on hand, when someone comes in for a nebulizer kit."
OH.........MY.......GOD......, did I really hear him say that? Wish I'd worn my boots.

He seemed a little nervous. Guess he was just used to people blindly writing checks and sending them in and not showing up with a bunch of questions. He suggested he might be able to charge it as a equipment rental. instead of a purchase. That way I could pay a $25 monthly rental fee and turn the unit back in. I told him that I'd had it for 3 months. He checked his computer and said yeah, I'd just started my 4th month. He said he'd talk to his boss see what they could come up with, then disappeared into the back room. After about 10 minutes, he came out and said they wanted him to have me turn in the one I had and sell me one of their rental units, for $40. Then he said he didn't have any rental units on hand and I didn't have my unit with me, so he just sell me the one I had at home,  as used, for $40. Again......gobsmacked. I told him to right it up.
While he was filling out the bill, he kept telling me to not tell anyone about this, because it was a one-time deal and he wouldn't be able to do it for anybody, if they came up and asked for it. I told him that wasn't a problem, I wouldn't tell anyone. Yeah, right......like I'd tell my friends to do business with this bunch.
When I got home, I called the AG's office and talked to the young lady I'd dealt with, earlier. She was astounded. She thought it was really strange that they would settle for 20% of the bill. And I hadn't even mentioned the AG's office to the guy. She said she would turn everything I'd given her, over to the people who handle the medical equipment complaints. She said they might want to take a look at this place and would I mind talking to them, if they wanted to. I gave her my number.

Yea, though I walk through the valley of the shadow of death,
I will fear no evil: For I carry a .308 and not a .270
0 · Share on TwitterShare on Facebook