Put on the lard and onions- a first deer!

CHIRO1989 Senior MemberPosts: 14,291 Senior Member
October 2018 in Hunting #1
Son # 3 got drawn for a youth lottery hunt at a local State Park. We hunted all day yesterday, dawn till dusk with a break to go eat and check out a lefty shotgun for him, we had one doe come in that AM that winded us and we saw 3 others when walking in and out on the field adjoining the woods, no good shot presented, but the frequent sightings was an improvement from our area we hunt in up north. We got out the door again this AM on time, we left the blind up in the woods after we moved it yesterday afternoon, we were on a strip of woods between a field and a lake and I put our backs to the lake in a strip of oak trees, the wind was in our faces this AM, we got there early enough to take a 1/2 hour nap before sunrise.
We had a doe skirt the area we could see about 1/2 hour after sunrise so that got him woke up. I spottted a head and some ears coming off the field we came in on and heading straight towards us but the deer turned before entering the strip of woods we were in. We saw the earlier doe again, but she was again on the move and was gone before he could draw a bead. A few minutes later the deer he shot came from the direction the doe had just come from and walked right up to about 20 yds before my son shot, I saw the deer hump down and take off tail down. He was going to let another one go, but I had him stop, I figured it was a good hit at that range. I could only wait about 10 minutes and I had to go look for some blood. I figured the buck had been chasing the doe.
We went to the area where the deer was standing, no blood, no hair. We did some circles looking on all of the oak leaves on the ground and a few standing plants, nothing. The deer had headed off towards the field in front of us, so I put him on point and told him to go where he thought the deer went, (I knew where I would go, I wanted him to think it through) went about 10 yds into the grass and there he was. Not a drop of blood anywhere, not even on the deer's flank. Had him walk up with the gun low ready and give him the butt tap and the eyeball poke, dead deer.
I could not feel the entrance wound and there was no exit, I could see where the fur was scuffed behind the shoulder and that was his aiming point, deer was quartering a bit with his left shoulder towards us when he was shot, I will get a picture when the butcher grabs him this afternoon, my son is working for them, but not butchering. The bullet pretty much cleaned off the top of the heart and hit the top of the stomach, the chest cavity was soup above the diaphragm, there was some bile in the mix so I did a poor autopsy in the field and we were way too messy to touch our phones, much less put our hands in our pockets, I could not find the bullet. We had about a 3/4 of a mile drag so I was interested in getting that over with, so sorry no good photos of the impacted organs, everything was in intact except for the very top of the heart and stomach. I will get a picture of the inside chest wall later.
Remington 20 ga. 870 express, Remington saddle mount, Remington rifled barrel, Remington swivels, Millet DMS1 1-4X24 lighted reticle, Millet rings(IIRC), Hornady Superperformance  2 3/4" 250 gr. monoflex sabot, Butler Creek sling. 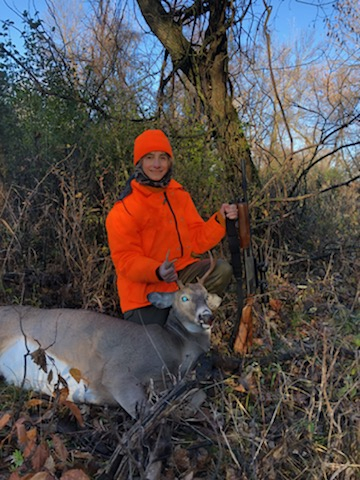 One for the chicks. 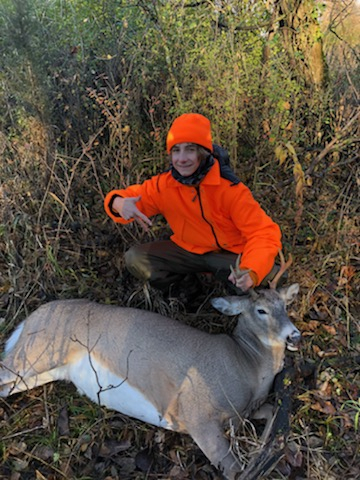 I take no pleasure in the death of the wicked, but rather that they turn away from their ways and live. Eze 33:11
4 · Share on TwitterShare on Facebook
«12»