Zee Senior MemberPosts: 28,061 Senior Member
December 2018 edited December 2018 in Hunting #1
Farmer friend of mine called and said that he had crops growing and that his depredation permits were active again. I needed to get busy shooting deer.

Being as I have to process the meat  and can’t just ditch the bodies, I started taking “orders” from work as to how many guys wanted deer meat. Immediately had 5 takers so that means 5 deer needed to die for now.

Problem is, I can’t take anyone with me to help who aren’t on the state approved “shooter” list. That sucks because it means I have to do all the work alone.

Got to the farm at 9:52, checked the permits, saw several deer near the barn and grabbed my gear.

Stalked over to the edge of the farm equipment and where the winter wheat was starting to sprout. There were 2 bucks laying down about 150 yards away. Many more further off. But, these two were the easiest.

They were only 8 yards from each other.

Anyway, aimed in on the quartering buck and sent a 168gr ELD-Match from my .308 Win through his shoulder.

And his head dropped. Dead.

Quickly worked the bolt and located the other buck. Ready to shoot. Hell, the sucker hadn’t even flinched!  He was still laying there chewing his cud. Oblivious that his buddy was dead. Not 8 yards away. Gotta love suppressors.

Well, with plenty of time now, I decided to take a head shot. Aimed below the ear on his broadside head and sent a round.

In the silhouette of a blinking tower light way off in the distance, I saw a halo of vapor jettison out the back side of his head as it dropped instantly to the ground.

Two deer down and now the work. 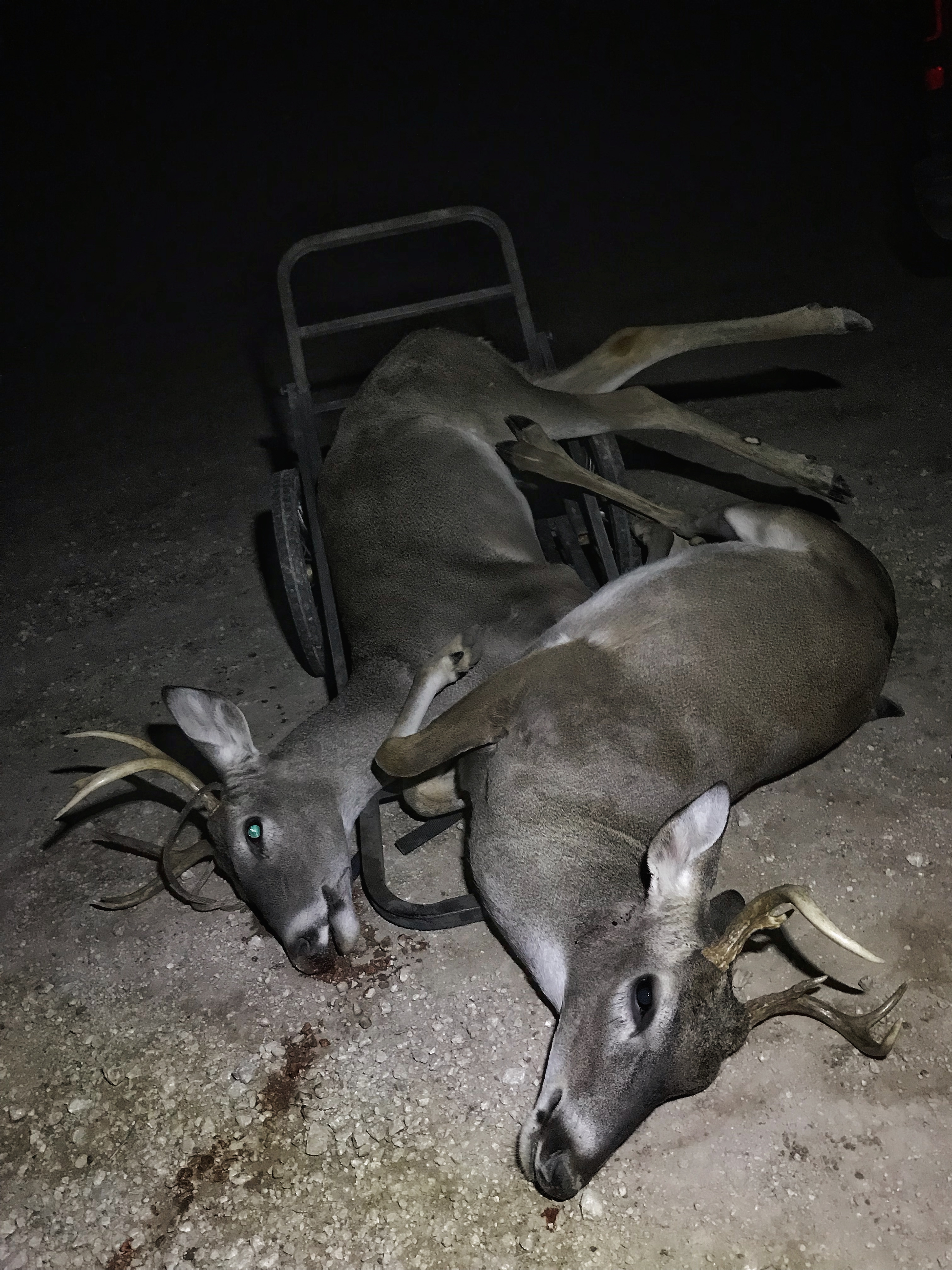 Used my game cart to haul them both to the barn at the same time. Kinda awkward, but it worked. That cart continues to pay for itself over and over.

Head shot was pretty simple. In and out. 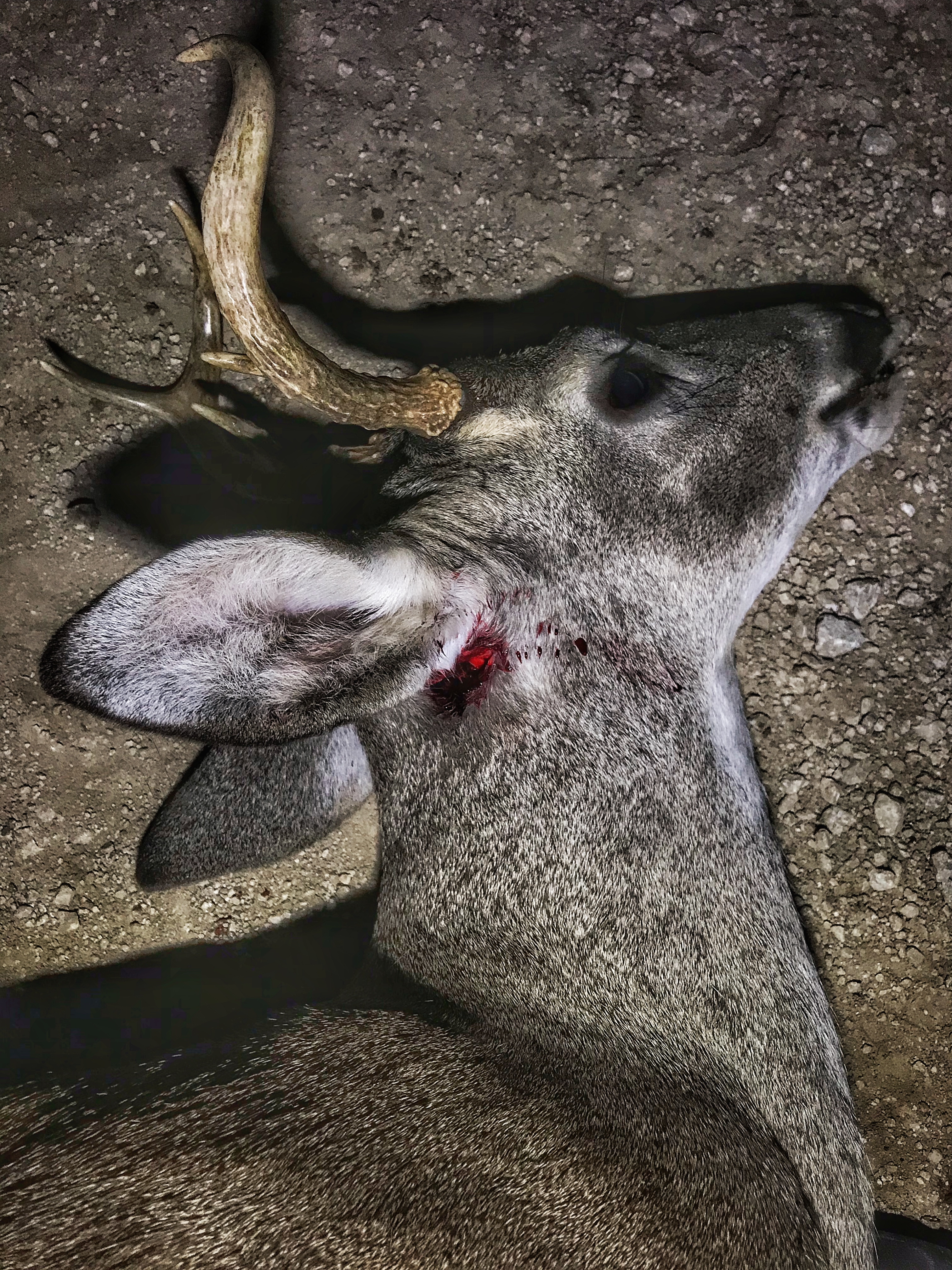 The body shot enrered high on the shoulder and angled forward. 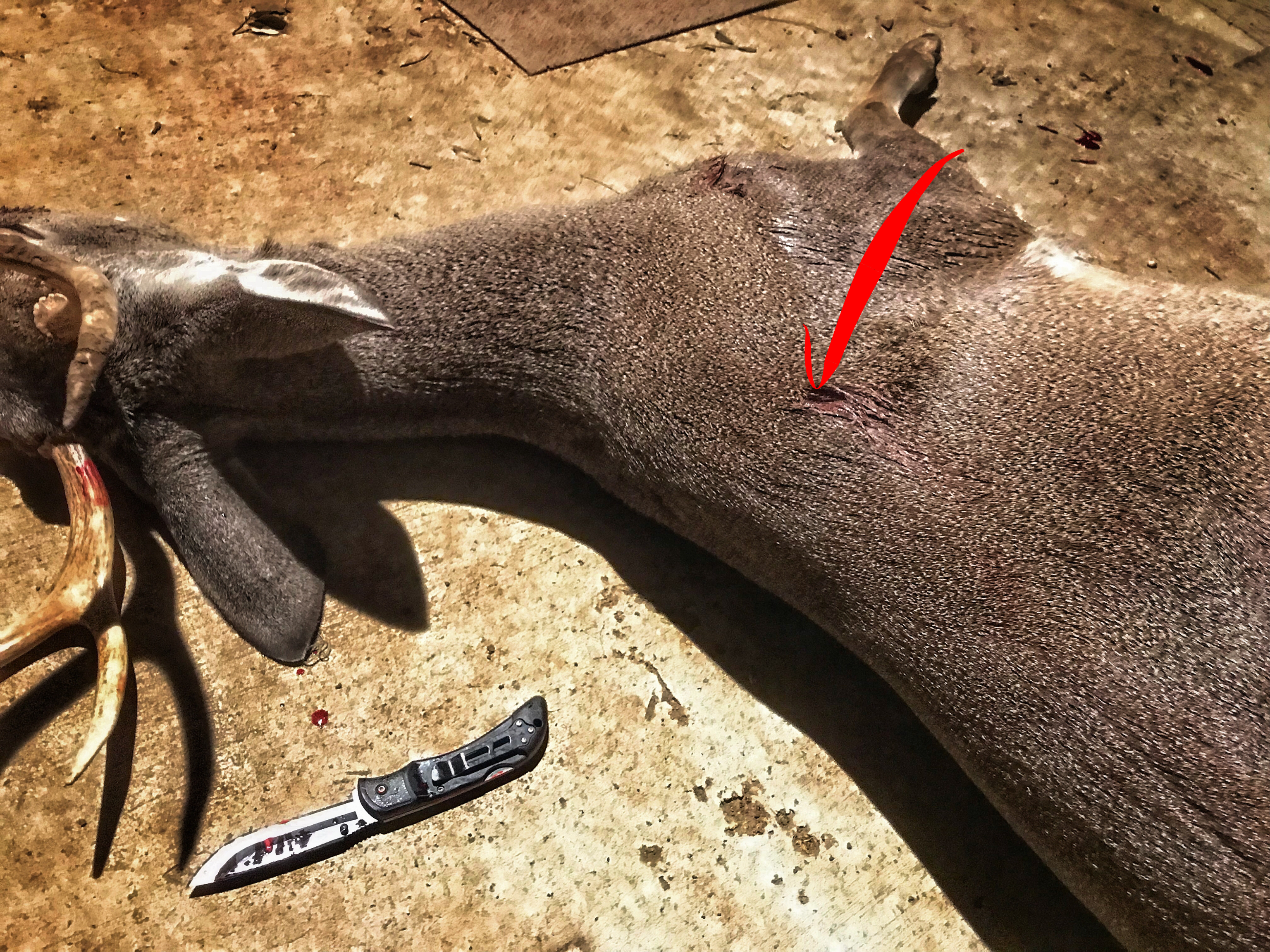 Smashing through the scapula, it plowed through about 6” of spine on its quartering drive forward and lodged under the hide of the off side neck (green arrow). 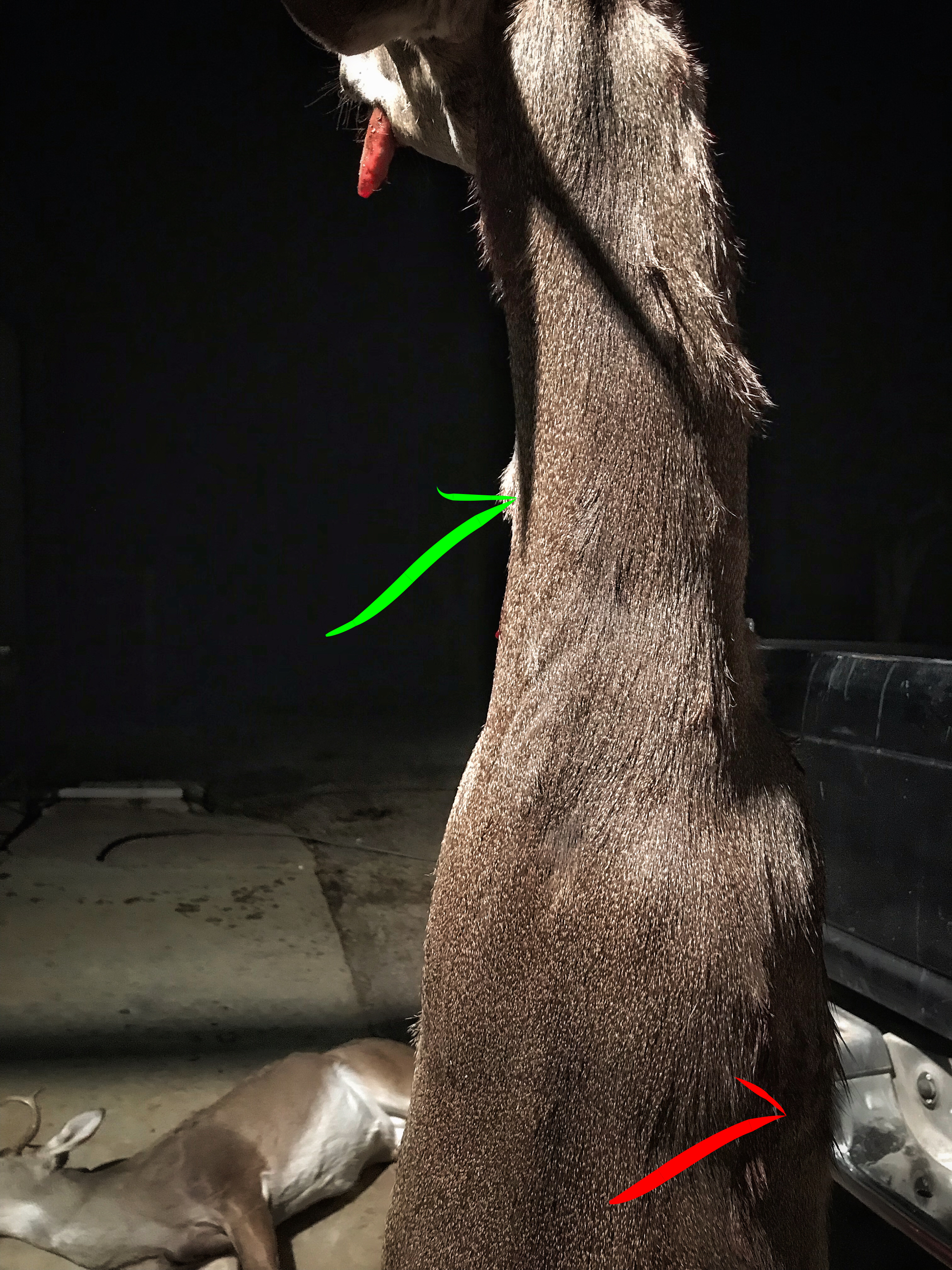 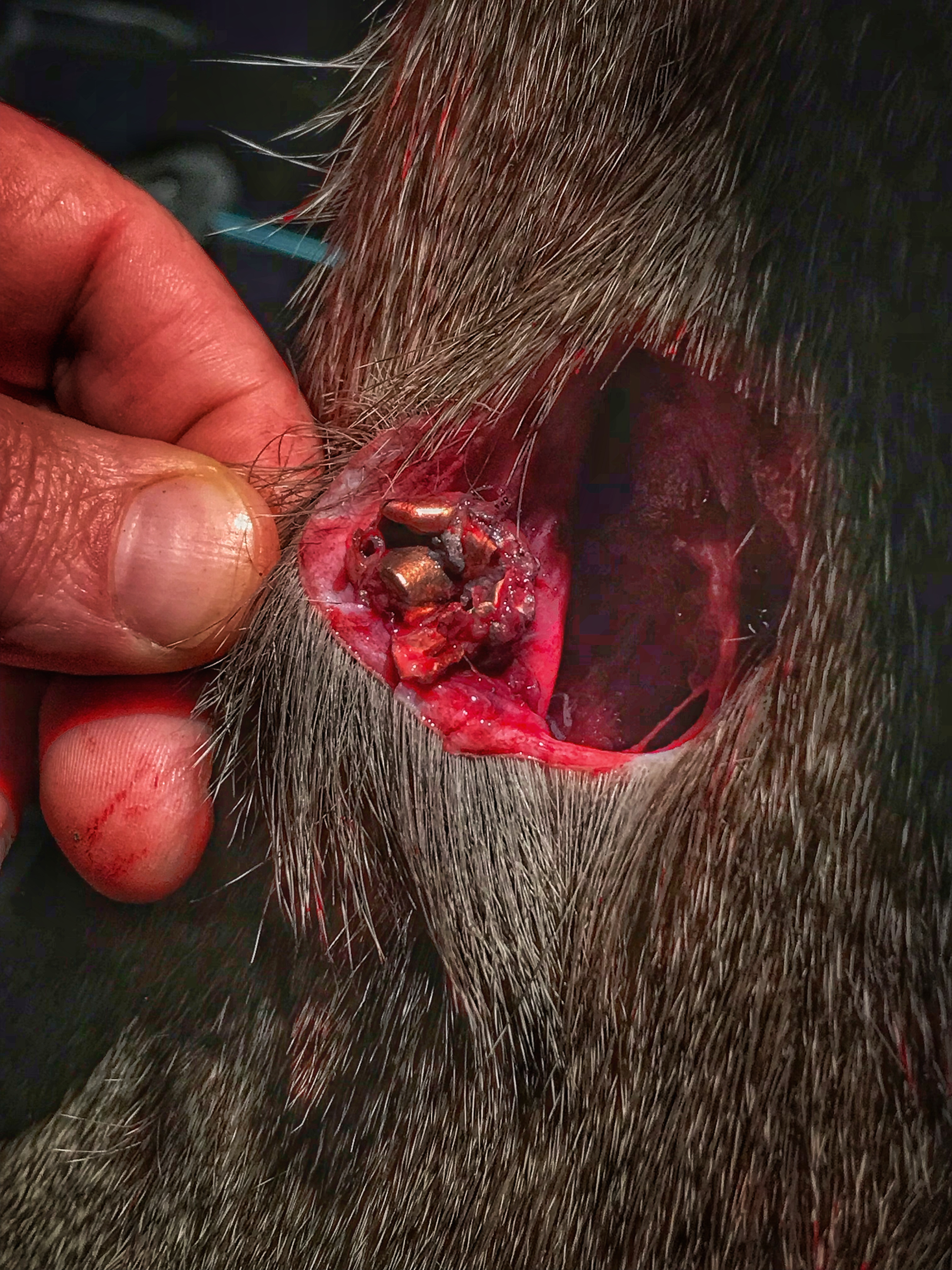 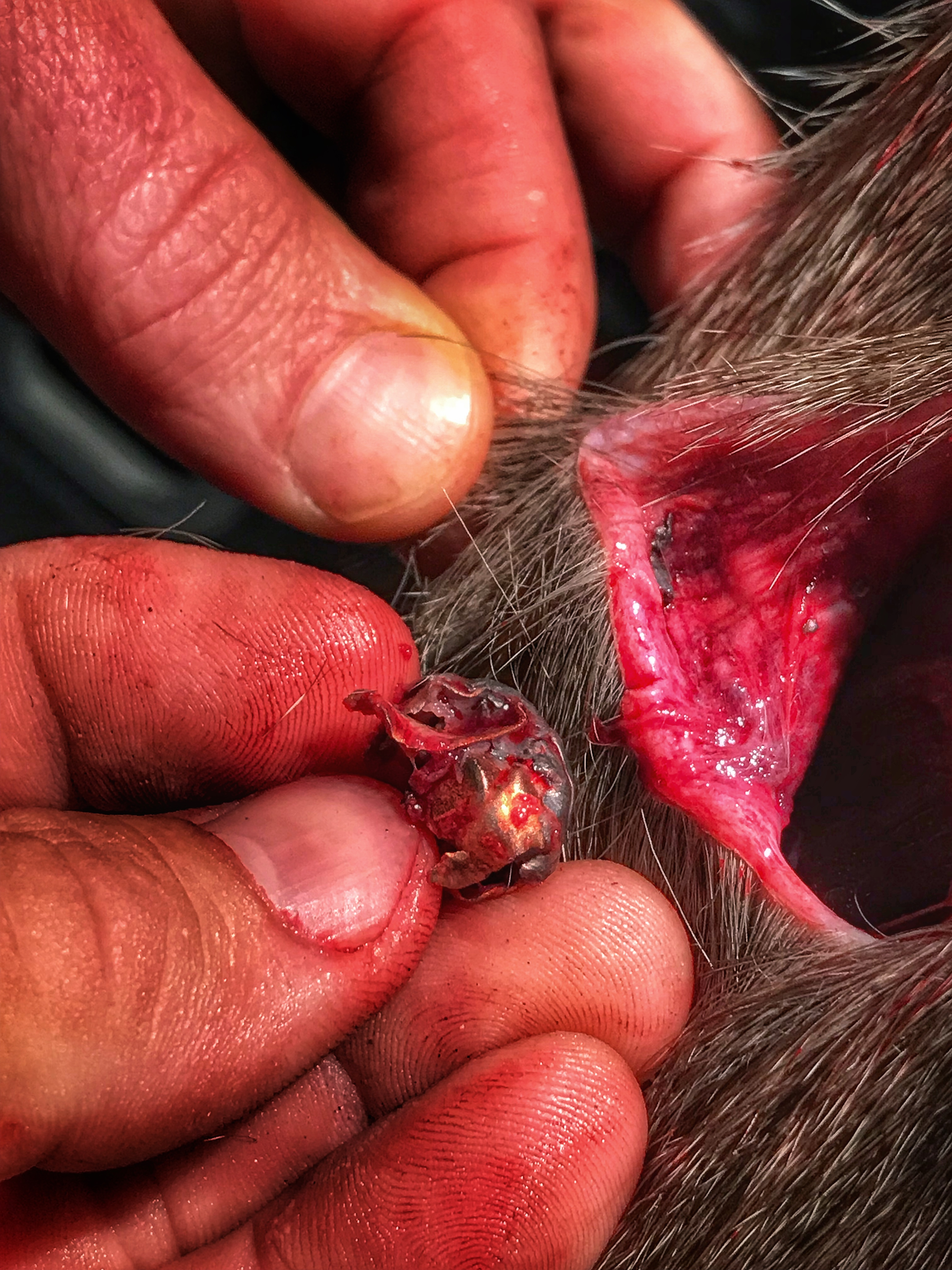 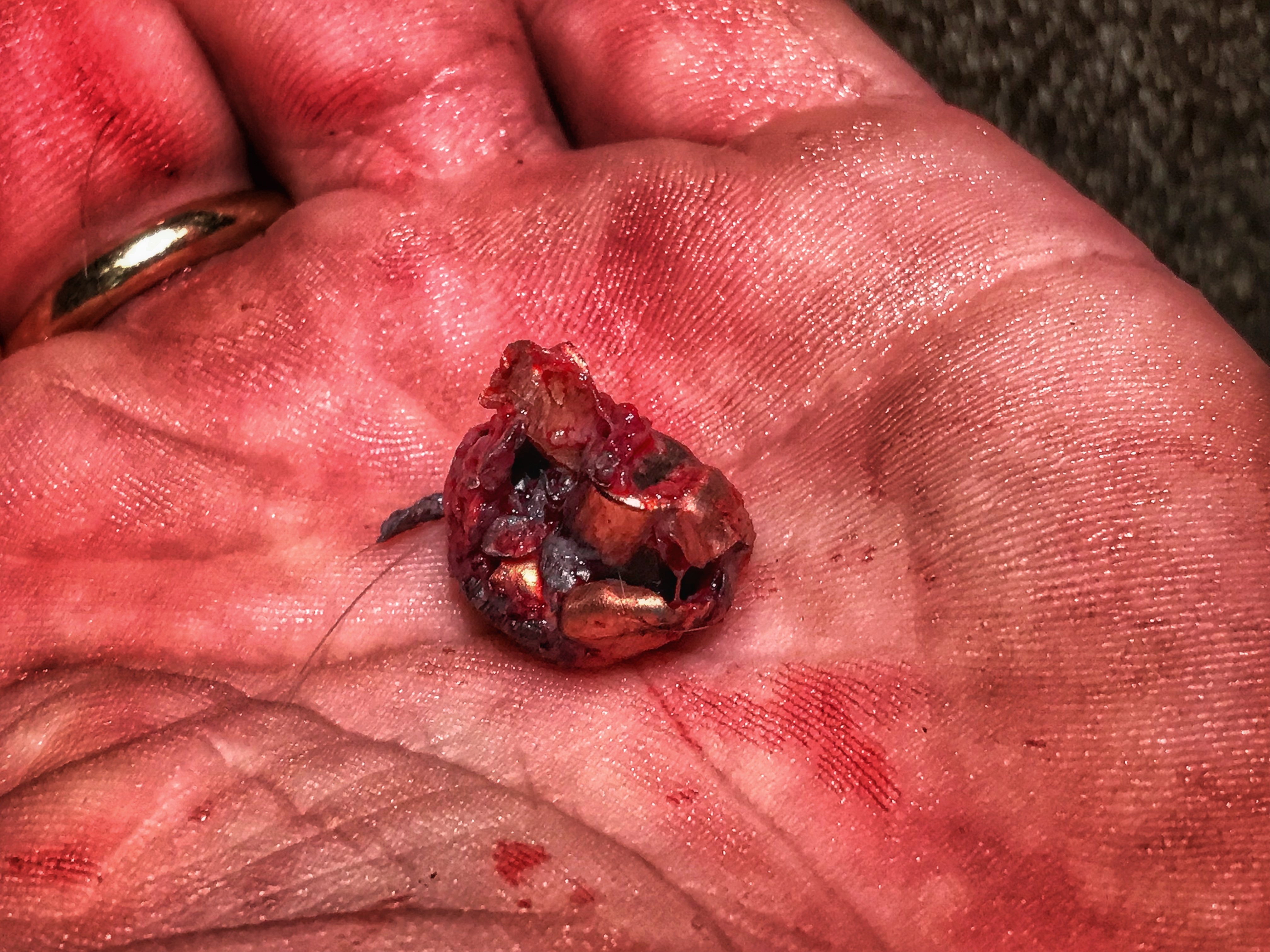 It made a hole through the spine big enough to put my hand through. 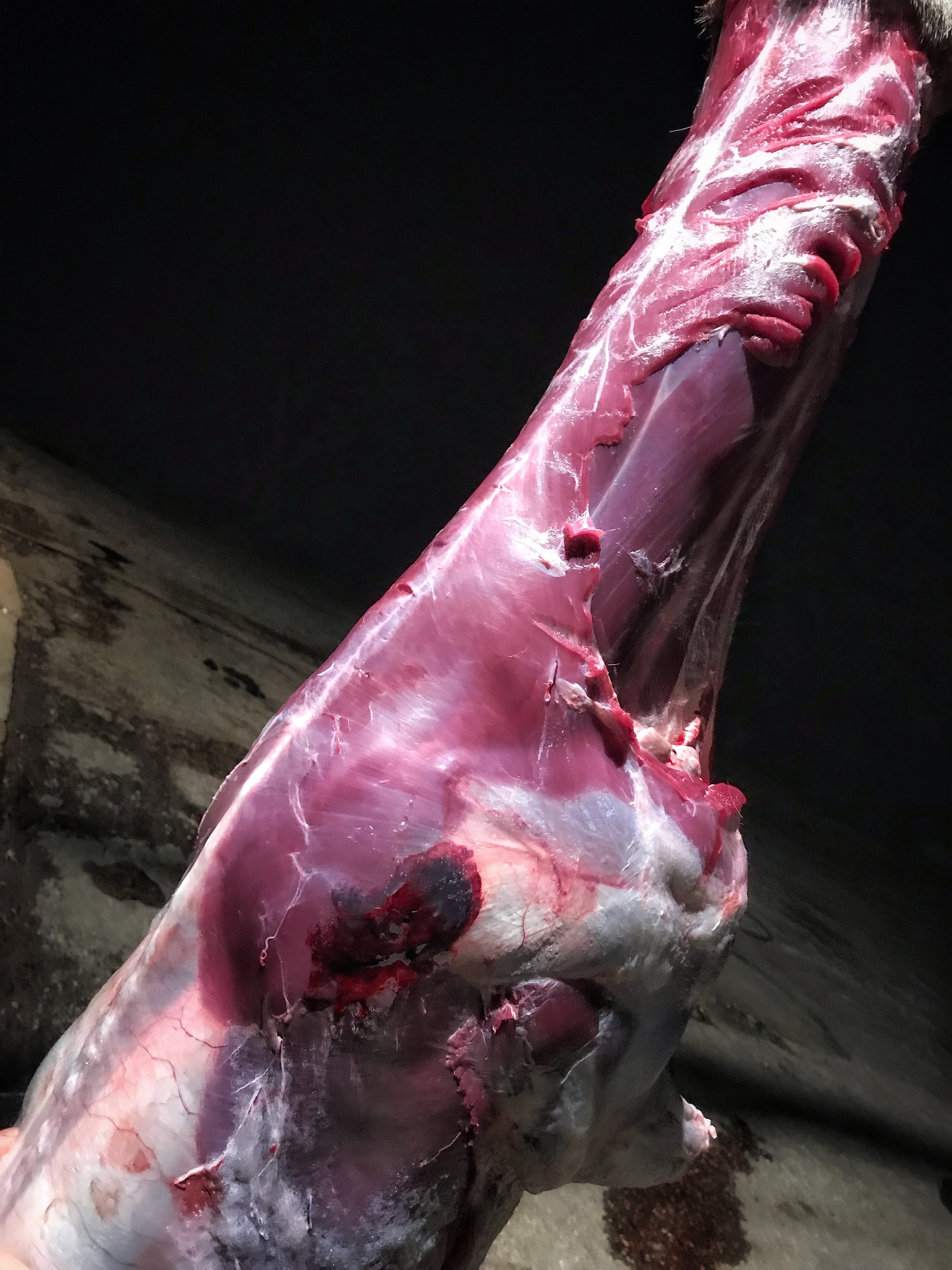 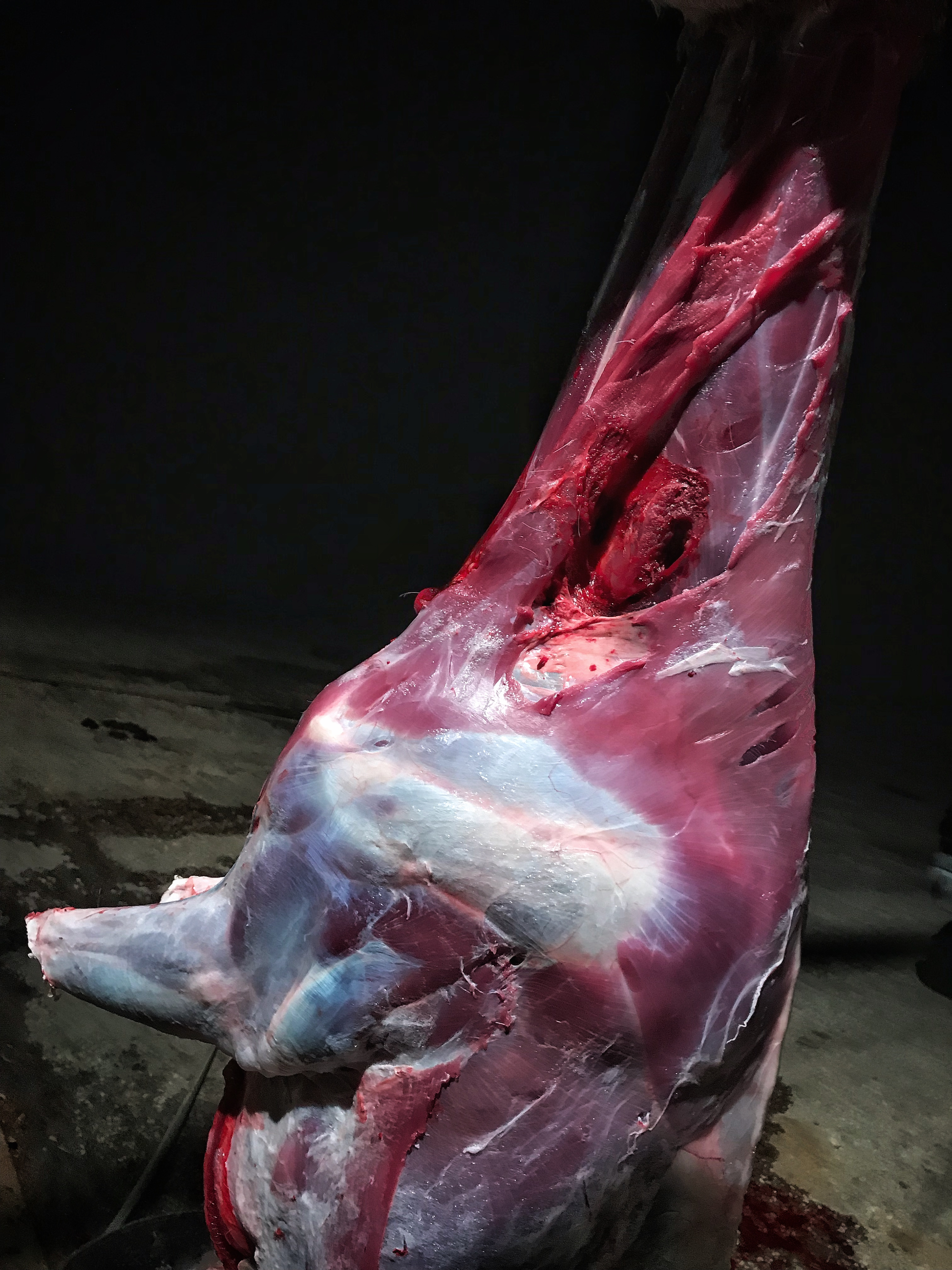 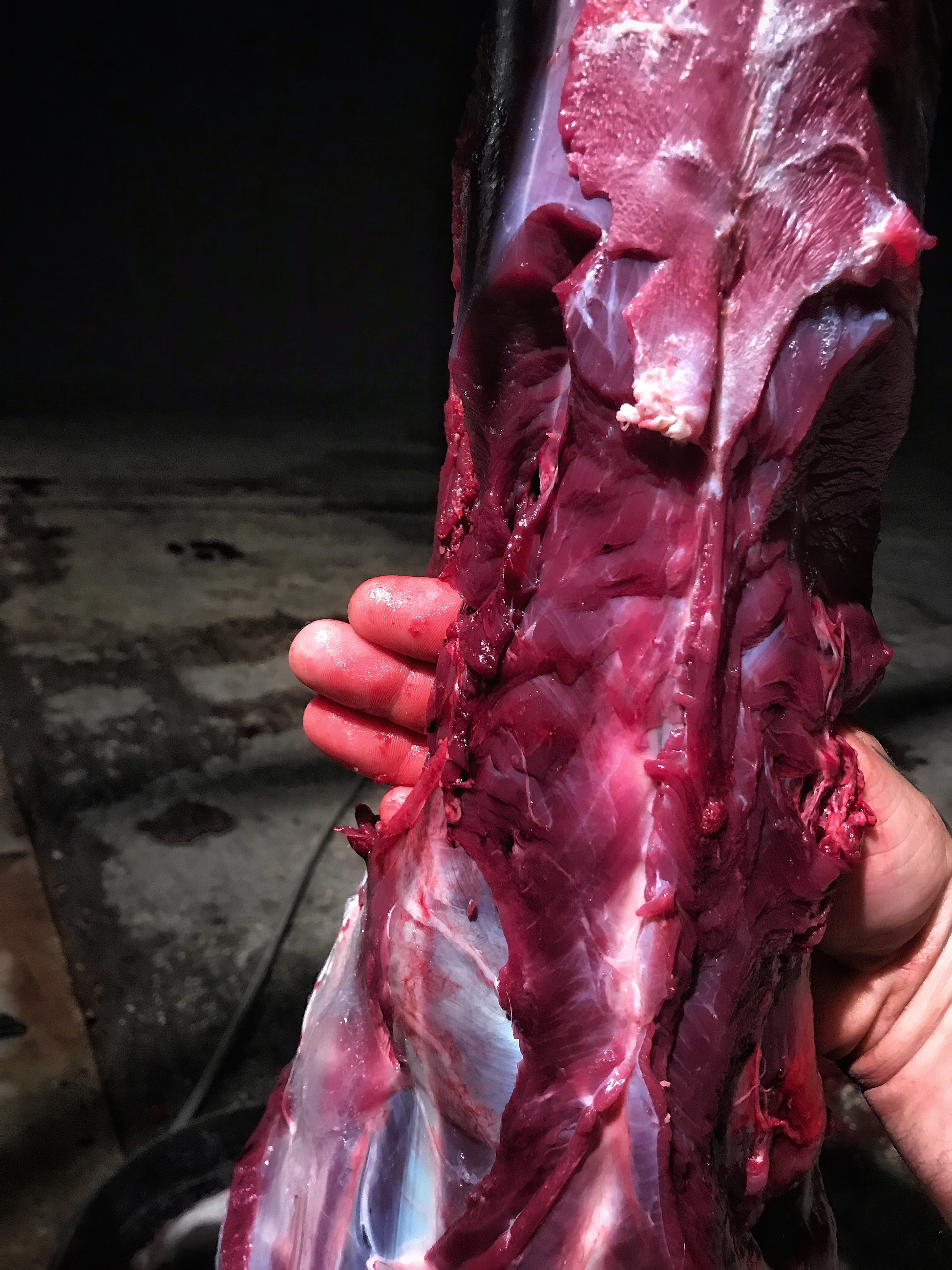 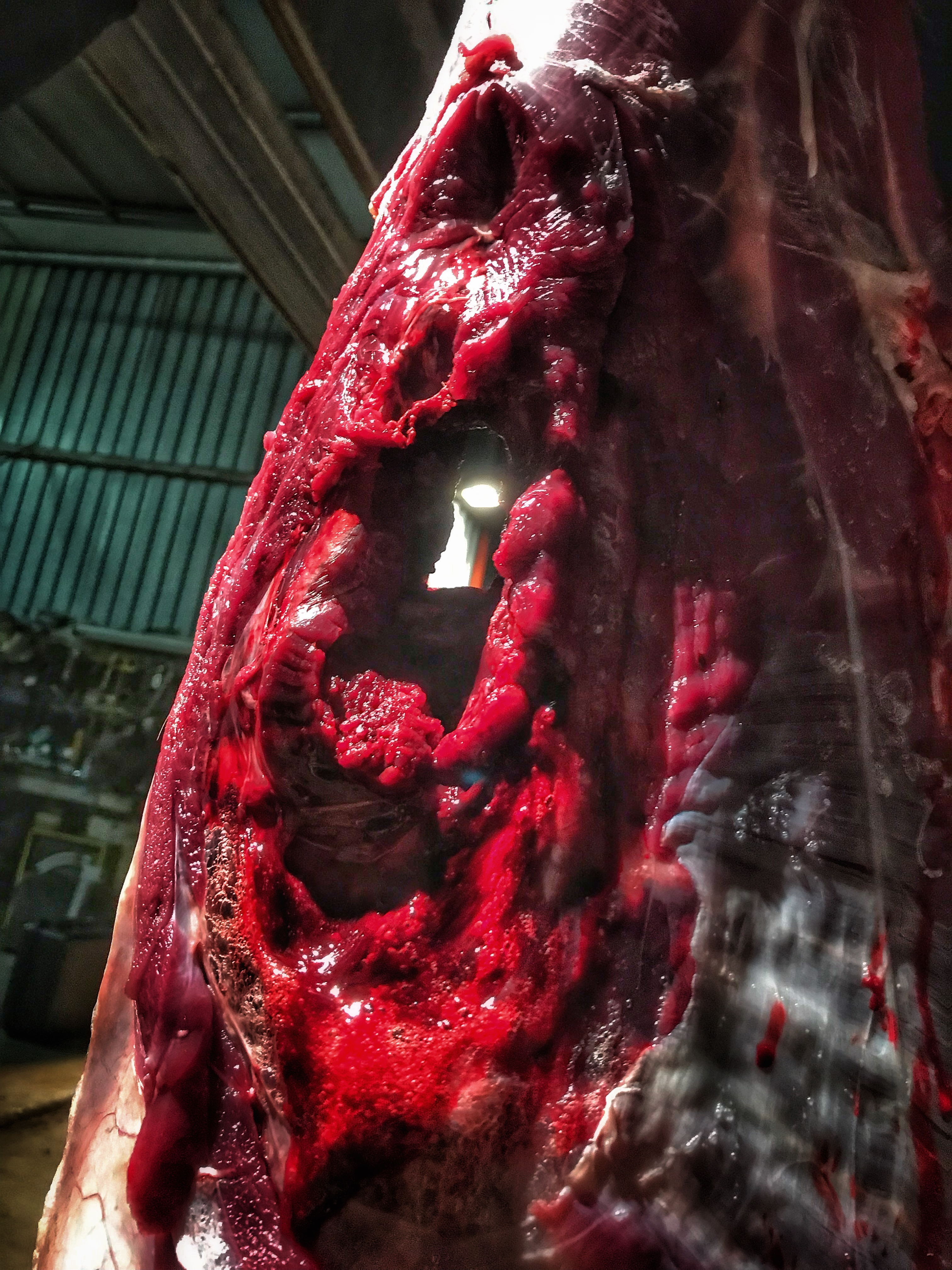 I absolutely love this bullet. 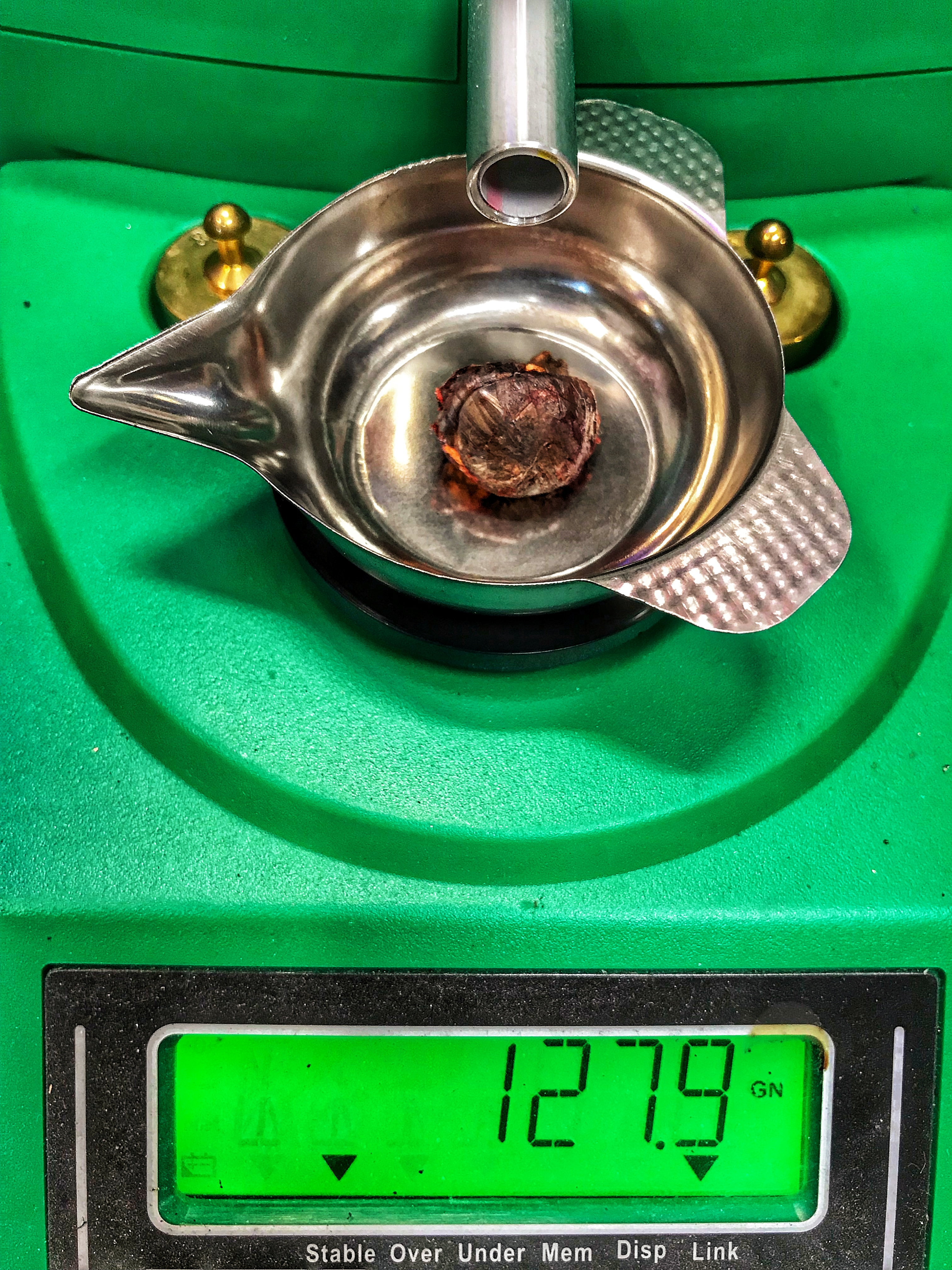 Two down. More to go.