timc Senior MemberPosts: 6,684 Senior Member
March 2019 edited March 2019 in Hunting #1
Got out to DBHunting Ranch today for my red deer hunt. The hunt was not only successful but one of the shortest hunts I ever had.
The guide said we would blind hunt today because he had seen several hanging around the tank (Pond for some of you) over the last several days.
So in the truck we went, when we got there he pointed out the blind we would use and said let's put out some feed first. so we walked out starting about 100 yards from the blind and spread some feed out to about 200 yards
Coming in we noticed some orynx milling around in the trees to our right, we also saw some whitetail does milling around the tank but nothing much else. As we finished putting out the feed and turned to walk to the blind we saw a bull elk and a few does, as we got about 50yards closer we noticed a single red deer hind in the trees to their left. We work our way down to the tank which was mostly dry right now and found a spot a little over 100 yards from the group. I set up and waited until the red deer was away from the elk cows and sent a 165 grain .30 caliber Sierra Game King bullet at 2600 fps sailing. The bullet impacted about 1" behind her shoulder. I'm watching in disbelief because she didn't even flinch! I asked the guide "Did I miss?" he said nope, you hit her, I said "Maybe you should tell her!" I put a second round just in front of the shoulder at the base of her neck, she ran about 75 yards and dropped. This was the largest deer I have ever taken, it kind of rattled me how tough they are. All in all I had fun even though we lucked into a shot 5 minutes after I go there. The deer not dropping definitely got my adrenaline gong!
not sure how much she weighed, it took all both of us had to get her in the truck! the nice part was I made it back in time to get her in the processor before they closed so I didn't have to use the night drop cooler. 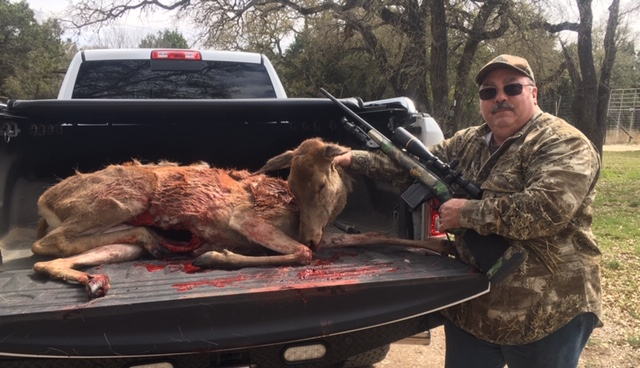