Six-Gun Senior MemberPosts: 8,149 Senior Member
April 2019 edited April 2019 in Hunting #1
Last year, I booked my first-ever guided turkey hunt with Misty Morning Outfitters in Alden, KS.  I was paired up with a guide named Casey who actually hails from upstate, New York.  He's hunted turkeys all over the country and proved to be extremely good at his job and very personable.  We hit it off right away and worked very well as a team in the field.   It went so well that we talked about a hunting together elsewhere outside of his work and exchanged info.

Long story short, I killed my first two ever Rio Grande turkeys in as many days, making it 5 total birds so far this season.  Better still, I met my personal challenge to kill a bird in all '4 corner states" in the heartland this season: Nebraska, Iowa, Missouri and Kansas.

I used the same Benelli Super Black Eagle 3 paired with a Primos Jellyhead .660" constriction choke tube that I've used as my shotgun setup all season.  The shells were also the same 3.5" Winchester LongBeard XR 2 oz./#6 load used previously.  The both birds were shot on successive days at just about 20 yards.

The first came into a decoy spread bristling with fighting purrs on the way past our natural cedar blind with 5 yards.  He had his mind on the Jake in the spread, but right when Casey, whispered to take the shot, he either heard or saw us and started to boogie out.  At that point, I led him like a pheasant and squeezed one off on the swing.  The bird dropped in his tracks and that was that.  10" beard and the longer of two two spurs was right at 1" The second bird was one of the coolest encounters I've had in a while.  We spotted a gobbler feeding very far out with our binos - about 500 yards away.    He was moving straight away, so it was just a matter of setting up to intercept him somewhere up the line.  We needed to cover a lot of ground, but had the benefit of a long woods stretch for cover and kept tabs on his position as we moved up.

Once we got to a spot ahead of the gobbler, we lost sight of him and waited for him to appear.  Eventually, that plan was interrupted when 2 other longbeards came out to our left and slipped behind a cedar patch within 30 yards.  I had to slink absurdly slowly over a log to get to a clear shooting lane, and the instant I got flat on the ground and retrieved my shotgun on the other side of the log, I see the beard, breast and base of the neck of the first gobbler we were trying to intercept in front of me at 20 yards!  Amazingly, his head was obscured by a deadfall log, so I could see him, but he couldn't see me.  After a quick assessment to ensure a clear shot, I sent round into the base of his neck.  I haven't taped him yet, but he's definitely a bit smaller than the first bird.  No complaints! 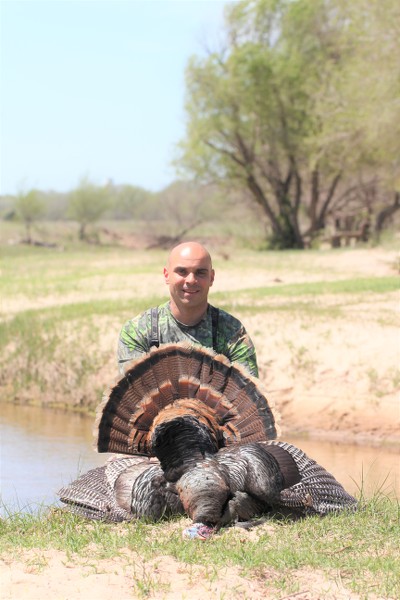 Did I mention that we found a pound and a half of morel mushroom while were out there?  Yeah, it was a great time...