orchidman Senior MemberPosts: 8,111 Senior Member
April 2019 in Hunting #1
Normally on a 4 day holiday weekend I am tied up doing charters......... Was supposed to be away all week culling goats so had arranged for a 'temp' to work on the boat. Unfortunately BH took ill 2 weeks back and we pulled the pin on our trip as chasing goats is strenuous and we decided to postpone the trip till later in the year. ( He has recovered mostly but is still not 100%)
Friday night we went spotlighting for possums.....managed to get 6 which was disappointing.
Yesterday we headed up to a place with Dave who has access to a property that the owner wants deer culled from. Got to the property and after chatting to the owner we headed out to see what was around.
Bh headed to check out an area and Dave and I stalked through a couple of scrub covered gullies.
As we topped out on a ridge I saw a Fallow buck making his way up the next gully away from us about 300m away. Pointed him out to Dave and we stalked the ridgeline until we ran out of cover..... Did a quick range on him ....156metres. Said to Dave to take the shot but he told me to take it. Dumped my pack and binos and set up prone using my pack as a rest. After getting set for the shot I had to wait as the buck kept walking away and I aint into taking texas heart shots!
Finally he stopped facing away from us and dropped his head to his right to check out something edible.I already had the scope cranked up so I laid the crosshairs on his neck and squeezed off. At the shot he dropped DRT. A couple of high fives and while Dave continued to stalk I headed down to start field processing him. 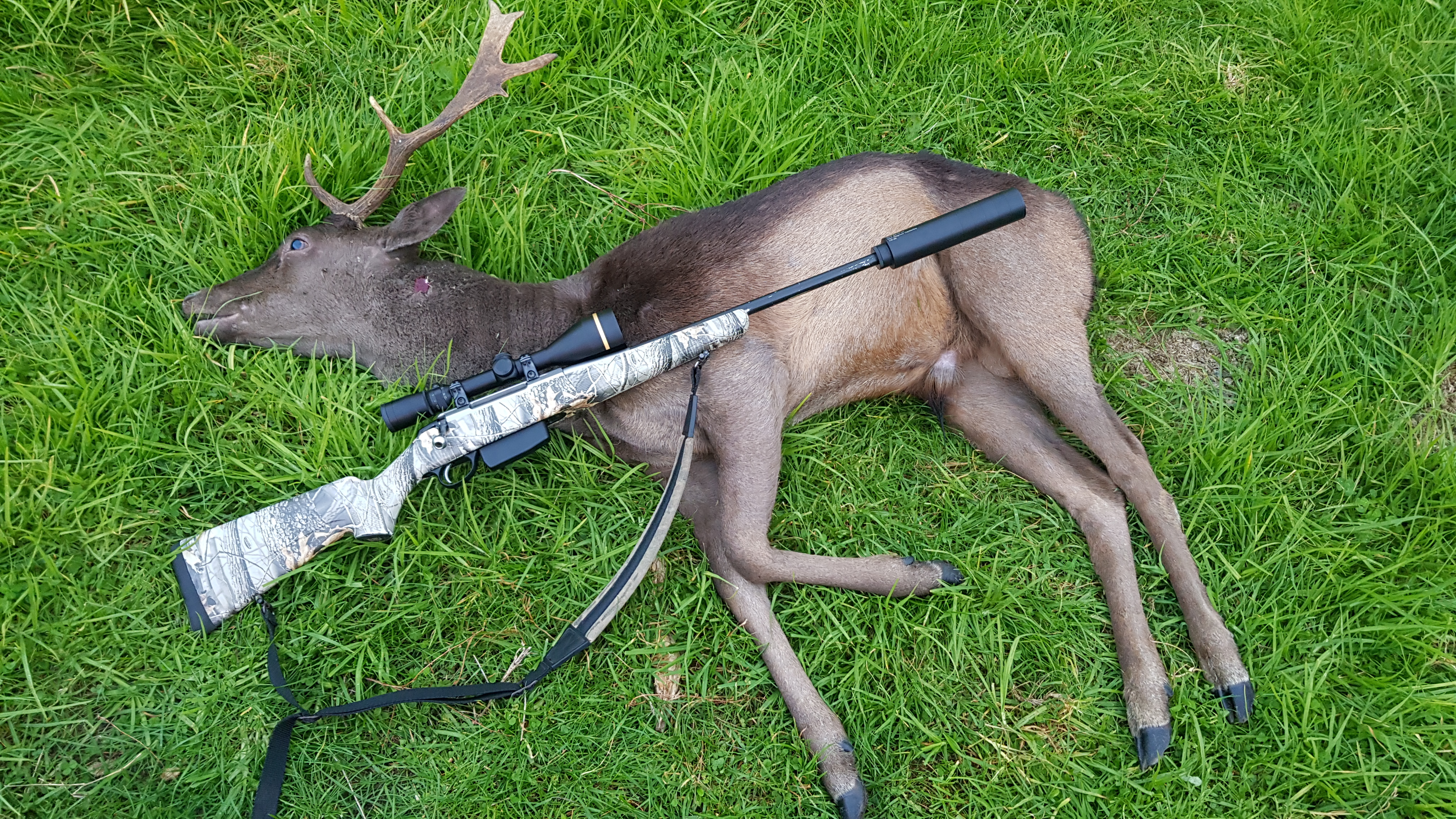 He still had a mouthful of grass when he dropped. You can see the exit just under his left ear.
Tikka 7mm08  ( suppressed)
Projectile was a 120g Sierra PSP pushed by a healthy dose of Varget. POI was within .5" of where I held. ( Rifle is sighted in for 200m btw and with that load shoots .5" groups)
Here is the view looking back from where he dropped to where I took the shot from. I was just beyond and to the right of the lone tree in the centre of pic on the ridge line....... 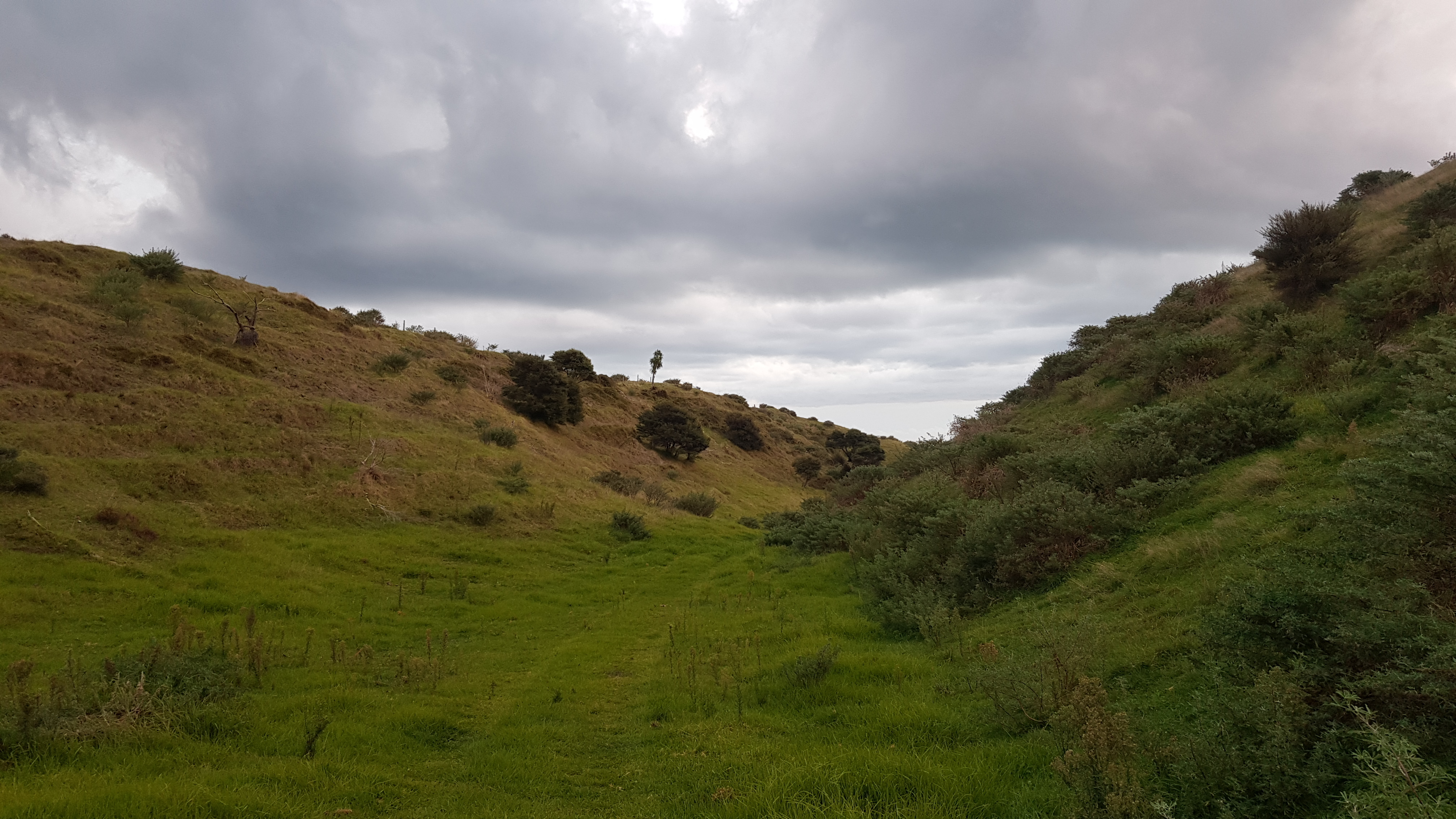 While field dressing him I heard the muted bark of BH's 7mm08 along with the 'thump' of a solid hit and knew he had scored......
Met up with Dave and we wandered over to see BH field dressing a large spiker which was stupid enough to walk out of the bush directly towards where he was set up. BH poked a 139gr projectile between his eyes at about 50-60m.
While he finished up I wandered back to get the quad .......it was dark by now and I had my Lenser H14 showing the way..........Just as I got to the bike I saw a couple of sets of eyes stealthily making their way up the hill about 100m away.  A closer look showed 2 wild cats heading for the bush. Taking my headlamp off and holding it under the forearm of the Tikka I sent another 120gr bullet on its way and heard the thump of a hit.  Couldnt find it in the long grass so I went to pick up the deer. After loading up BH and Dave headed to stalk another area under lights while I made my way back to the jeep. Stopped on the way to have another  look for the cat and found it under a lupin. The bullet had struck its shoulder and almost cut it in half. I took the time to bury it as the owner has a couple of young kids and I didnt want to leave it for them to find.
Loaded up the bike and while talking to the property owner I heard the sound of a suppressed 7mm08.......Headed off to meet up with BH and Dave and found that Dave had also scored a deer with a head shot at short range. 3 deer down and now in the chiller. Land owner was pleased as he has just replanted chickory and the deer are hammering it. He wants us back to continue the good work.......and who are we to deny him

Many thanks to Dave who invited us to 'spend time on the Hill' with him.
Still enjoying the trip of a lifetime and making the best of what I have.....
1 · Share on TwitterShare on Facebook