Final harvest of the season- Axis

bullsi1911 ModeratorPosts: 11,008 Senior Member
January 2012 in Hunting #1
Sunday morning was pretty much the last hunt of the season. I want to get out next weekend, but we are pretty much out of space in the freezer, and I think I'm just going to take the 3 year old out and 'hunt'- i.e. play in the blind for 10 minutes, then walk around, look at rocks, and laugh when he sees deer scat and cow pies and yells "POOP!"

This was the last animal I was able to harvest: 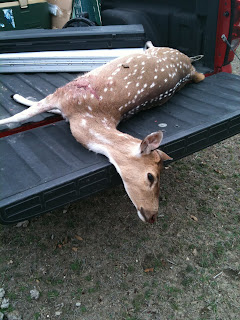 A smaller Axis doe. See, our lease is over-run with whitetail bucks. Of the bucks, is a LARGE population of them being 'less than optimal'.
But I was out of Buck tags. With the ratio being so out of whack, we did not want to take a doe unless it as really old and 'dry'.

Later, as me and my brother were on the way out, another one of the hunters said that there was a herd of axis back in the field. Lo and behold, AFTER we drove through, a herd of 10-12 axis does wandered out and were grazing near the tree line. I put all the camo back on, reloaded the rifle, and went after them. I worked back through the trees until I was about 40 yards from them, and one of the yearlings spotted me. I sat still as the stomped, and tried to figure out if she should bark (Axis 'bark', like a small dog, FYI) and run. Finally, the herd started crossing the field, and the yearling lost interest. By the time I made it to the tree line and had a clear shot, they were about 200 yards away and about to cross into a neighboring property.

I took a kneeling position with a Stoney Point monopod as a rest, lined up on the biggest doe that I had a clear shot on, and broke the shot. Connected just like I wanted to. She was slightly quartered away, so I lost some meat in the shoulder. But all in all- that was an excellent way to close hunting season.

Well, this axis had another example: 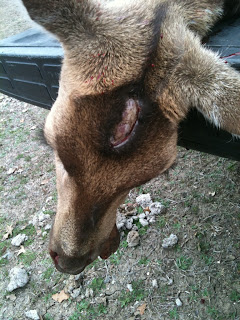 Some jackwagon had skipped a bullet off this deer's forehead in the last few days. This one was not infected, so we were able to keep the meat.
To make something simple is a thousand times more difficult than to make something complex.
-Mikhail Kalashnikov
0 · Share on TwitterShare on Facebook