Ernie Bishop Senior MemberPosts: 7,571 Senior Member
June 2020 in General Firearms #1
Wednesday is a play day for shooting prairie dogs and an opportunity for others to play at distances further than they typically shoot.  None of this is under time or scored.  It is designed for success.  In the videos, all of the guns in the videos are ones that I supplied, with the exception of Mike's 6.5 Creedmoor.  I will actually measure Mike's 4-shot group tomorrow, as we are picking the steel we set-up (5-pieces of steel).  I have hit indicator lights, that light up when you hit the target on each target.
I also had my center-grip 6.5 PRC XP-100 out there, and one of our local shooters was shooting his rear-grip 6.5 Creed.
My rear-grip/single-shot 375 Chey-Tac was shot later in the day after some left, as we were trying to get drops confirmed at further distances.  The wind got worse as we progressed.  I had a wedding to officiate at 5:00 in the afternoon, so two local friends:  Dan and Jeremy both the shot the 375 CT.  Pictures of the 375 are forthcoming.
We had 28 participants this year, with 9 first time shooters.  We had three junior shooters, with the youngest one being 10 years old.  If our regulars could have been there, we would have been easily over 35 shooters, which is big for my group.
For some of the distances being shot, we were using up a lot of our internal adjustment, combined with our MOA or MIL reticles, to get enough correction for some of the distances.  These videos are not listed in the order they were shot.
One of our new shooters at 1890 yards.
Bayside Custom Gunworks center-grip 7mm Dakota with my 175 grain ELD-X hunting bullet.
Jim had never shot beyond 200 maybe 300 yards before WY-SHOT, and all of his shooting had been off of the bench previously.
https://youtu.be/StlxcMAcGSQ

Dan Ekstrom shooting the Kauger Arms Black Widow rear-grip specialty pistol chambered in 6.5x47 Lapua
Using the 140 grain Nosler RDF bullet.
15" Barrel, Holland Radial Baffle brake, and a Trigger Tech trigger.
These were first shot connections from cold bore at 1204, then at 1496 yards.
For first shot connections, Dan had never been successful from cold bore at either of these distances.
https://youtu.be/yHD-MWaFpto

Matt Drefke-Winner of the overall at WY-SHOT, made his furthest impact on steel with my 7mm Dakota XP-100 at 2020 yards.  Dan's son and father also shot, which was really cool.  They had a long drive to get here, and drove straight through.  They did the same thing on the way back home.
Yes, this is my hunting bullet being shot here.  175 grain Hornady ELD-X.  I have killed four elk with this set-up, and the distances were all under 300 yards.
https://youtu.be/1Fejtumy204

This is Mike with his new Bayside Custom Gunworks center-grip XP-100 in 6.5 Creed with his best group ever at distance.  This is Mike's second year at WY-SHOT.  He is from the Cheyenne area.
https://youtu.be/NmbZrNX2EpM

https://youtu.be/uB05y7YeCRA
Dan decided to try to push things even further with the 6.5x47 Lapua Black Widow.  He really loves shooting this gun!  1890 yards. 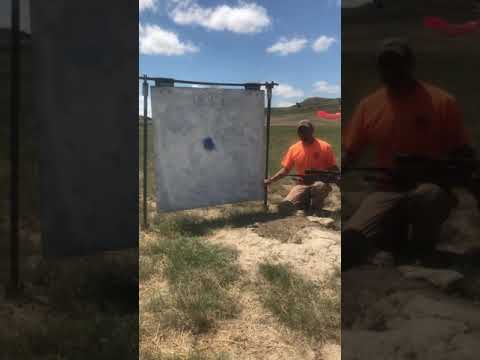