That will have to do for sight in for deer season.

mitdr774 MemberPosts: 1,772 Senior Member
October 2021 edited October 2021 in Hunting #1
Cutting it close as usual for the past few years, but I finally have my little .458 sighted in for the upcoming season.  I had grand plans of getting things mostly dialed in back in August with a final tweak this month, but ran into a few snags.

Issue #1, my brass had two different case capacities.  I was trying to figure out some random flyer and erratic velocity change issues and by chance happened to start weighing my cases.  This lead to checking case capacity in water between my two distinct groupings of brass by weight.  Apparently I made my brass from two different lots of Sig .300 WM and didnt catch it before.  The lite brass is approximately 203gr (65.5gr H2O capacity) while the heavy brass is approximately 217gr (63.1gr H2O capacity).  I had to rerun the loads through QL and start over with settling on a load.  I decided to switch from a Speer 400gr to a Speer 350gr at this time since I am low on the 400gr, and now getting low on the 350gr.

Issue #2, split the laminate stock.  While testing the new load options I was using two different powders with IMR 4227 in the heavy brass and W296 in the lite brass.  I just wasnt having a good day at the range and was blaming myself for the crap groups, or so I thought.  At that point I threw in a known load and let fly.  It didnt hit anywhere near where it should have.  That was when I noticed what looked like a split in the laminate on top behind the receiver.  I packed up and called my dad on the way home (hands free in the truck) which resulted in a detour to my parents place.  Upon removal from the stock we found multiple splits in the laminate including the portion behind the recoil lug being shoved back.  Quick and dirty hopefully temp fix was done using a lot of super glue and a brass pin through the stock, followed by a proper bedding job (not the crap job Winchester did).

Issue #3, repair failed.  The next weekend I went to the range with my dad and after a handful of rounds it seemed okay.  After getting home I picked up the rifle and something just felt like it shifted.  I couldnt duplicate it, but I felt it.  Pulled the metal and sure enough what we were concerned about happened.  Time for a trip back to my parents and drop off for a not as quick or dirty attempt to get it to last through to deer season.  The area behind the recoil lug was milled out and replaced with a block of cherry wood.  The brass pin was replaced with a cross bolt and another bedding job done.

Issue #4, repair failed.  The next time I got it to the range things went okay, until they didnt.  Things looked okay, but not ideal with the 4227 loads and I switched to the W296 loads.  I noticed a huge POI shift with the first round, but was not completely unexpected due to some of the nature of this cartridges behavior, and the remaining rounds for that group and the two groups after all had the same shift compared to the 4227.  At that point I threw the MagnetoSpeed on and started doing velocity checks.  Knowing the chrono causes the POI to shift even higher I held really low.  No new holes in the paper, or backer.  Time to pack up again.  After removing the metal again, I found the cherry split and shoved back behind the recoil lug.  That was almost the end of my plans for hunting this season.

Solution, new stock.  Another trip to my parents and another solution.  My dad dug out an old black walnut blank he had laying around and figured he could get something workable before season.  Here I am three weeks later with my rifle back home.  Last weekend it was finished enough to take out to the range without too much worry about weather and this weekend it had enough oil and a coat or poly on it to protect it through the season.  Over the winter he might want to get a better finish on it, but thats his call.  Im thrilled with the results so far.  Last weekend I took some test loads to find the one to sight in with, and today I got it as dialed in as im going to for this season. 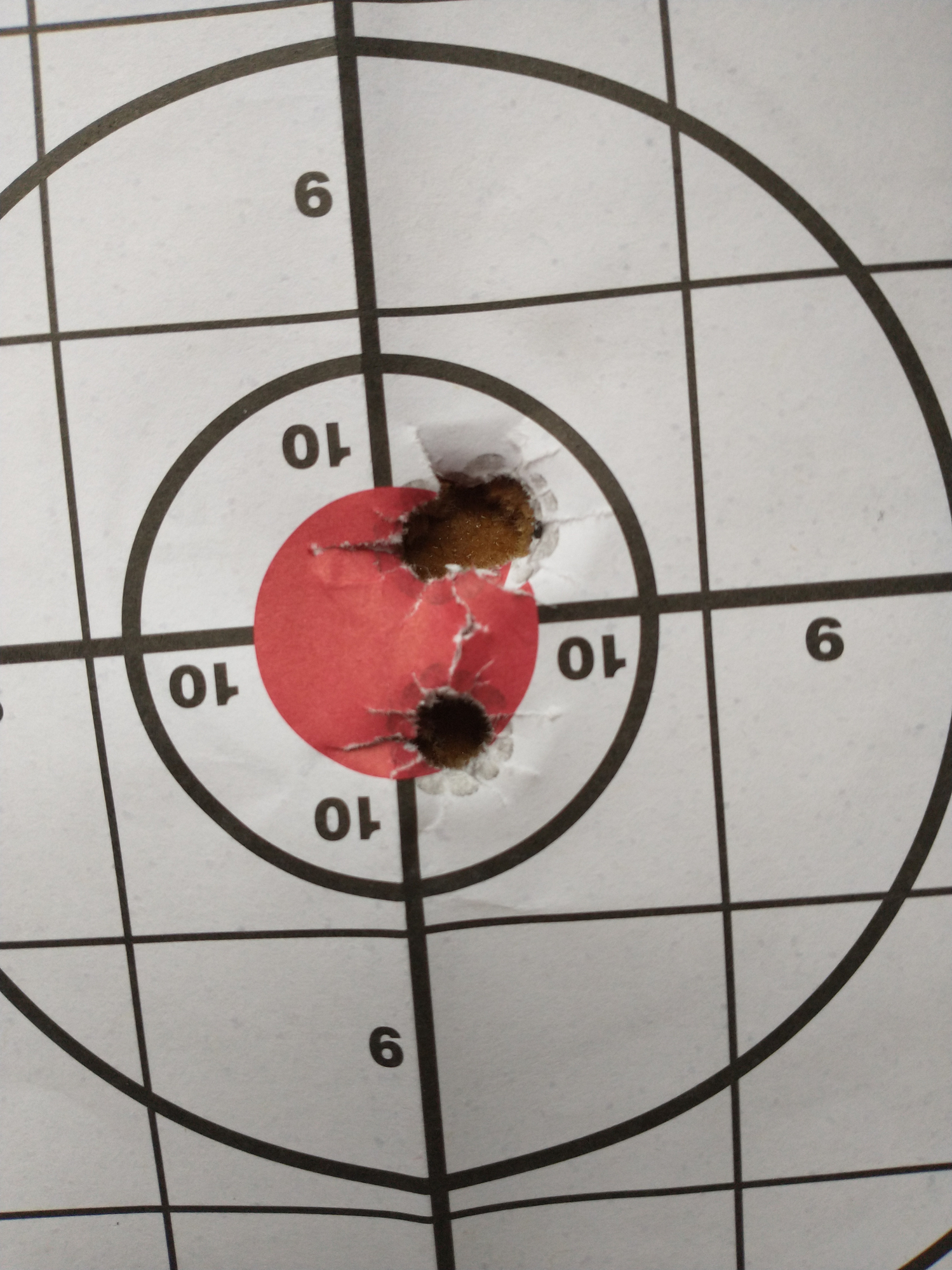 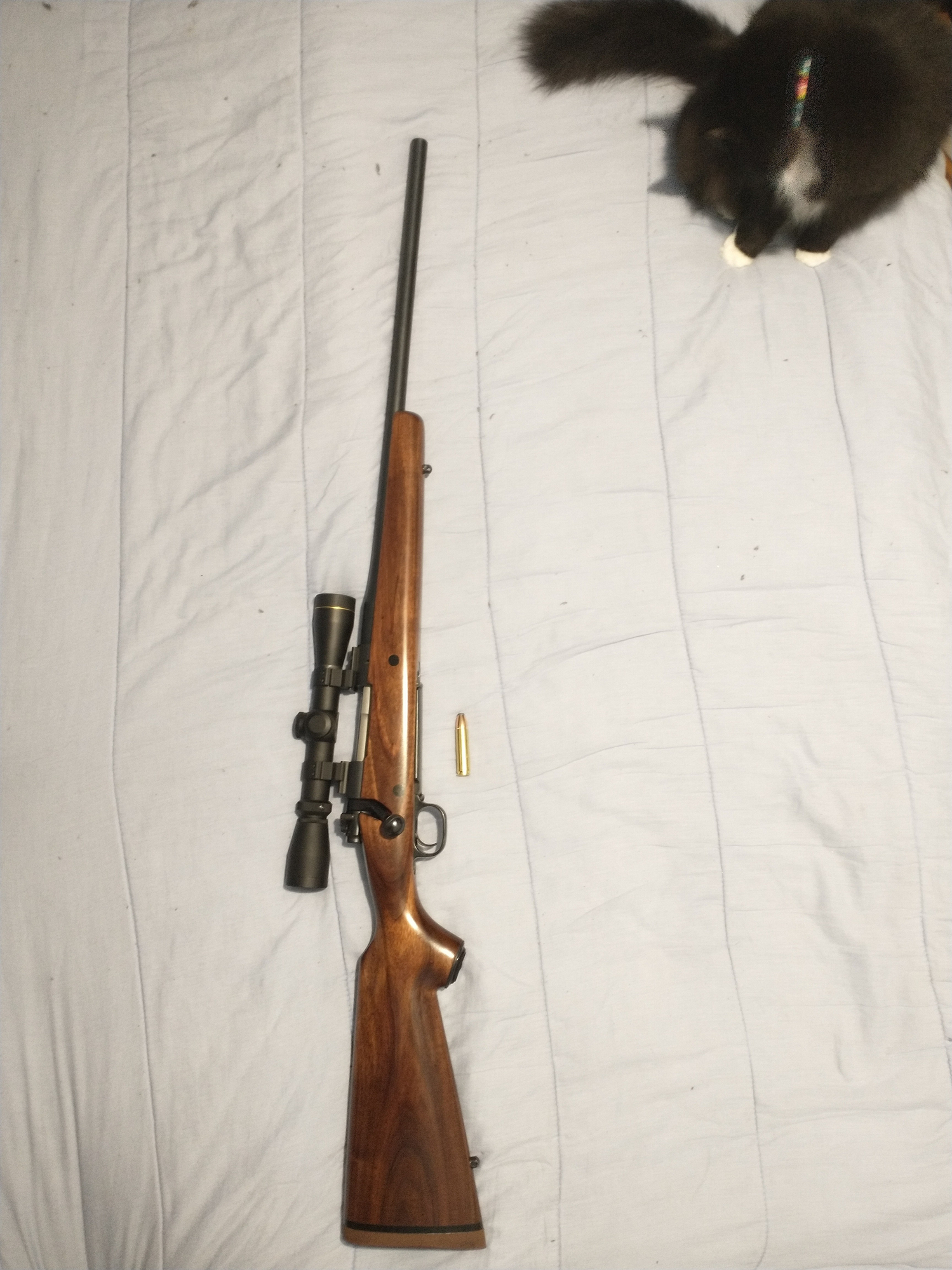 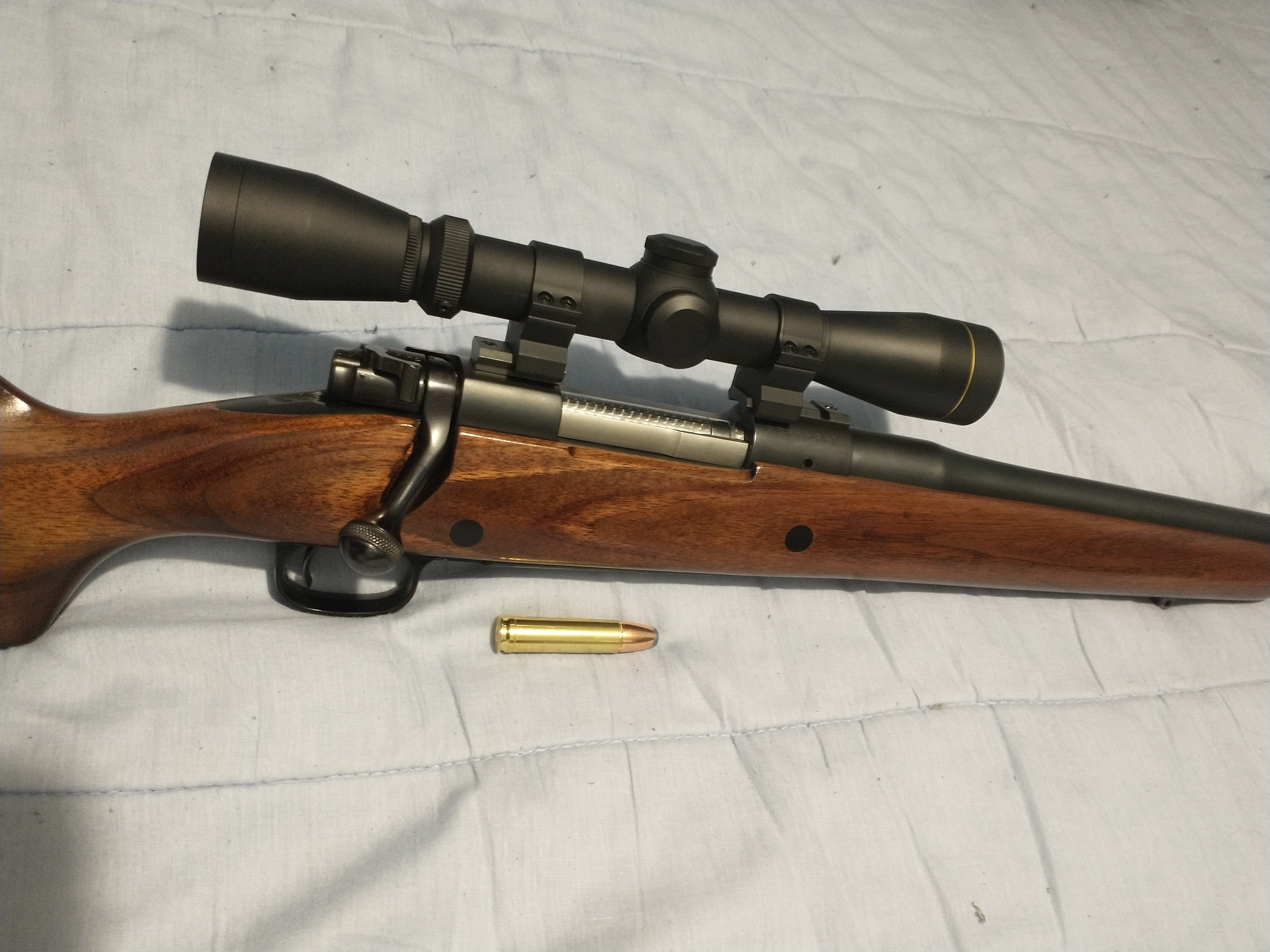