Ernie Bishop Senior MemberPosts: 8,527 Senior Member
March 1 edited March 1 in Hunting #1
Zee always likes to put a little bit of pressure on me, to help broaden my horizons and to develop a skill set or learn to do something different than the way that I typically do things.
This is not just his desire, but an actual request that I have given him in times past.
By nature, I am a very deliberate shooter. In other words, I want things to be perfect as possible.
Whereas, my good friend, when it comes to shooting steel…”A hit is a hit! Moving on!”
The first time we ever shot together on steel at distance, I was shocked when he hit the edge of a target, shooting a 6.5x47 Lapua rifle I had brought with me, and was getting ready to move onto the next further target. I was stunned that he didn’t want to make the correction, and center it up.
Well, I digress.
I am better on accepting wobble than I used to be, and I am capable of shooting faster, on demand.
The reference point here is, is it I am willing to shoot faster than I used to-Thanks Zee!
I have only taken two head shots in my life, and both are when I was with Zee.
It is just not a shot, that I ever consider when I am in the field. I can tell you in the future, it will be on my mind as an option under certain circumstances in the future.
My first headshot was the last time I was with him using a AR-10 in 308 Winchester on a hog.  That Hogg was eating corn, and it would not stop moving, and it literally took me forever to make the shot.
This would be with a Remington 700 SA bolt rig in 223 Remington, using a 60 grain Hornady V-Max. Scope is a Vortex. It also has a two-stage trigger, I believe it is a Timney.  I rarely use a two-stage trigger.
After explaining where I should put the bullet, he also explained that it would be a lot easier if the deer were not eating.
When deer are eating corn, they are bouncing all over the place and running back-and-forth and you have animals going everywhere, whereas when deer are not eating, they still they stay still longer, but still not as long as a lot of people would like.
They would not cooperate, and so Zee put out some corn, and we had deer everywhere, and it was exactly like he said, a whole lot of movement.
I guess I should’ve brought some Valium or something like that, because after the deer was down, I found out that he was extremely stressed out with the whole situation. I was having a good time (I was focused ) and not worried.  The one thing that did bother me, is that I was shooting at around 50 yards or so, and the rifle was zeroed for 100. I did not know, exactly where the bullet would be impacting at that distance, and that bugged me more than anything.  I did end up shooting a tad low but she went down immediately.
Ultimately, I did put another shot into her head. The coolest thing about this whole situation, was the explanation that Zee gave me after the animal was down. It was then, that I fully had a better grasp of how to approach head shots wisely.  If I had made a perfect shot, I would not of got that explanation. It was some of the most helpful information he gave during the week.  Tripod usage, would be another one of the extremely helpful things, but this shot was from the prone position.
This meat went to the rancher, as he wants all of his deer killed with head shots. I think this my most fun kill! 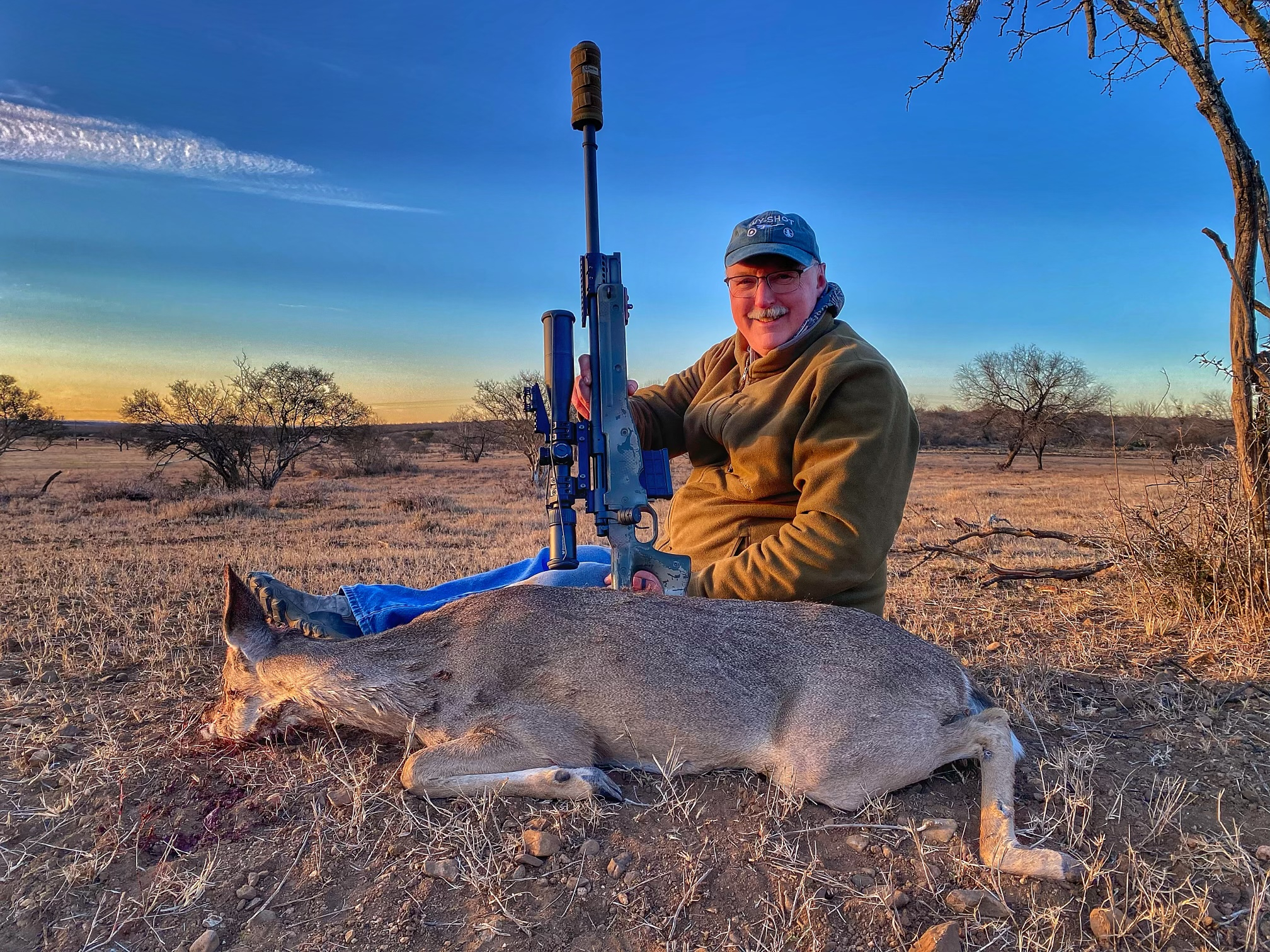 Speaking about rifle shots, we did find a doe that was still alive that had been shot/wounded with the 270 Winchester.
As you can tell the impact barely broke the skin, and I’m pretty sure that the distance was under 100 yards. 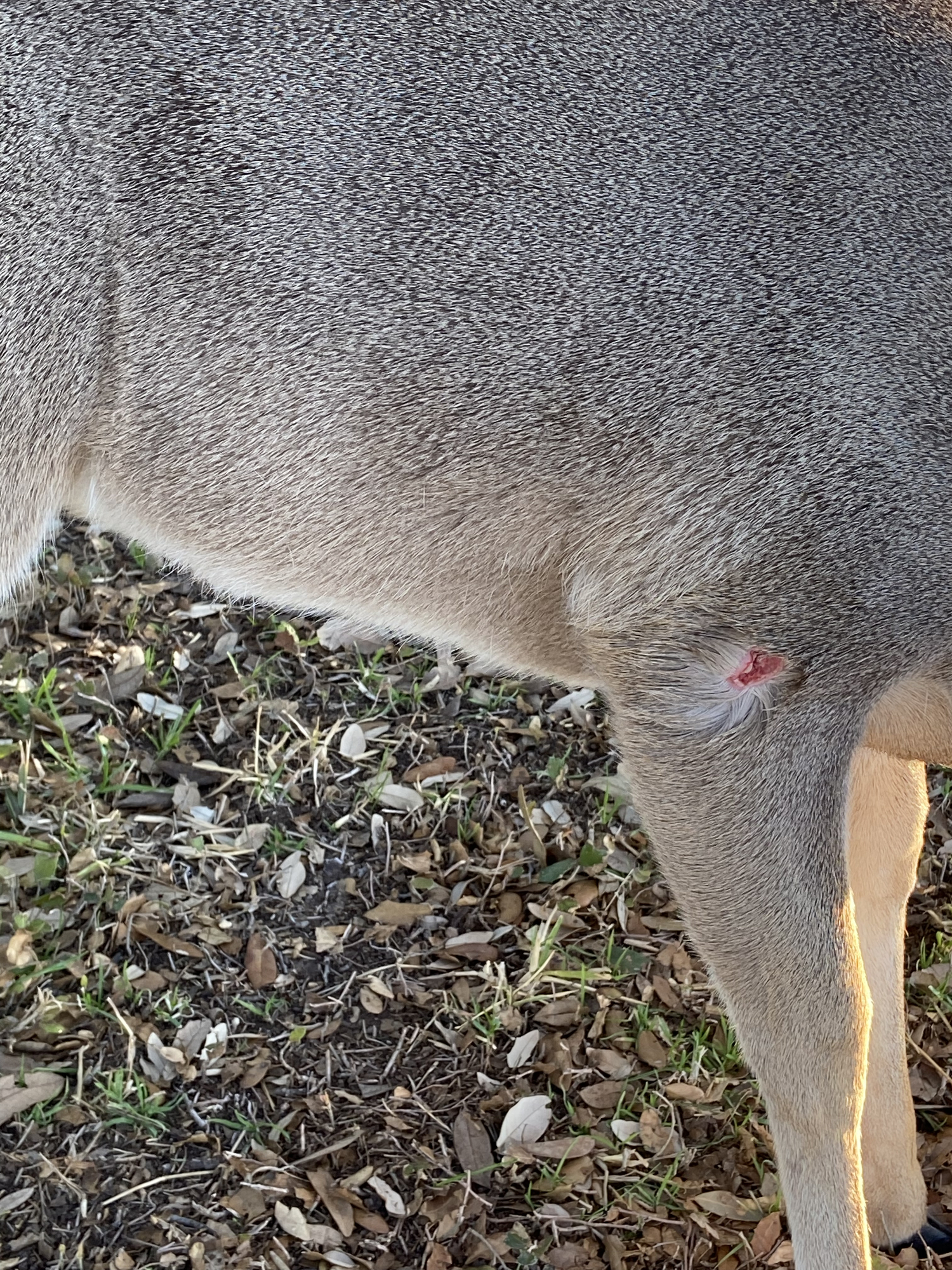