Yesterday, 1st of Sept deer season started here again. At first I wasn’t going as it was thursday and I had to go to work on Friday,mas usual. As the day went by at work I desided to go after all.
When I got home I grabbed my gear and took one hour drive to my hunting area. I had called to one farmer who owns the field where I often hunt deer when we are not having driven hunts. He gave me a personal permission to go there even he hasn’t yet harvested his wheat. He told me that deer will do damage anyways so my shooting doesn’t matter much.

At 5:45p.m I had my position ready and started the waiting game. It was a beatiful evening and at 7:25p.m I saw a young velvet buck walking on the side of the field behind my spot. He slowly aproached my spot and I was certain that he would see or smell me as the distance closed to 10 yards. He was behind the rock as I tried to strech myself from the prone position I had. I saw him in front of me and I slowly raised my rifle.
****, my scope was on 12x and I could’t tell if I was aiming to his a** or chest. I quickly stepped down on magnification and aimed behind his shoulder. Just as I was pulling my Mauser’s trigger he saw me and started to bolt ahead from walk into full blast. I fired the rifle but he was faster and I hit some 8 inches too back.
I watched him run towards the forest through my scope and waited if his steps would start to go haywire but no, he ran towards the forest line by the field.
When he landed after jumping over the dike I shot him second time. Distance was about 120 yards at that time. Inheard the bullet as it landed and the deer disappeared so I was sure that I had made a good shot despite the running and steep quartering angle.

I went to look for him and saw that the game was over and he had felled on the spot the bullet hit him. 150gr GMX from Hornady’s Superformance load had done it’s work.

I went to my car and drove it closer.  Took the game cart I built a few years ago and picked him up. Got him into my car’s boot and drove home.

Today I learned that second shot had entered a bit further back, smashed the spine, broken the opposite side shoulder blade and stopped there. Nicely mushroomed.

It was a nice start for the season. Meat in the freezer again. 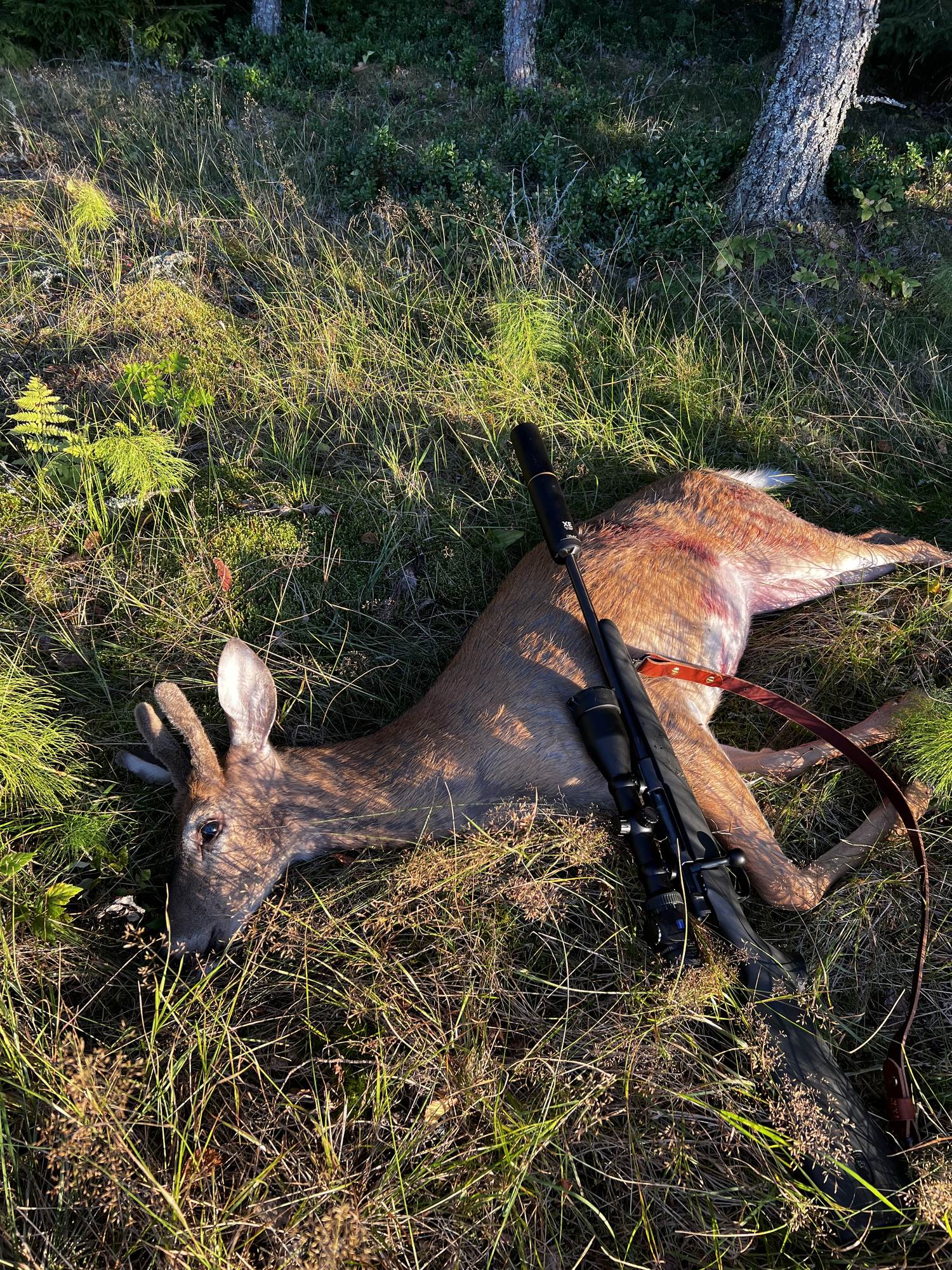 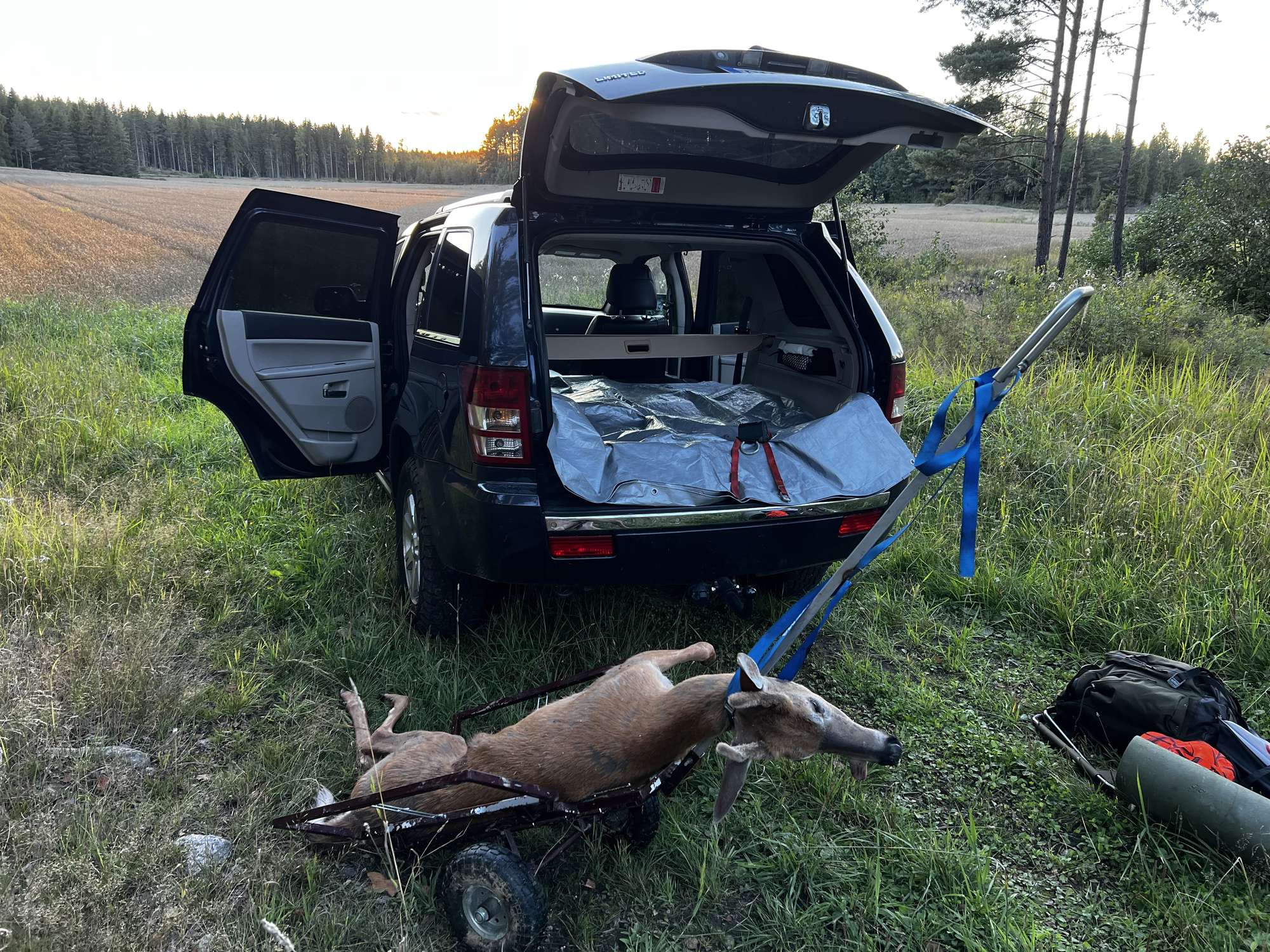 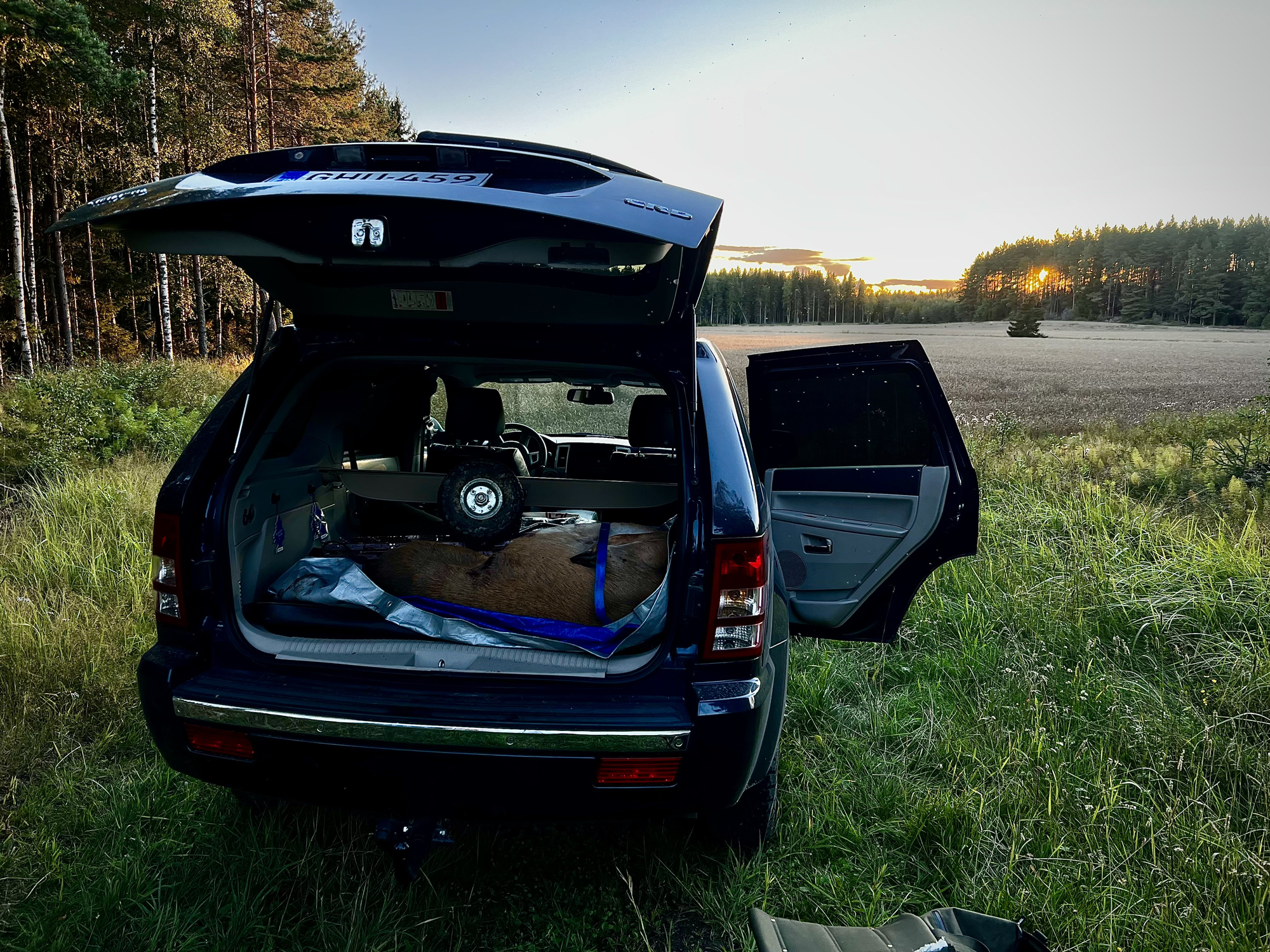 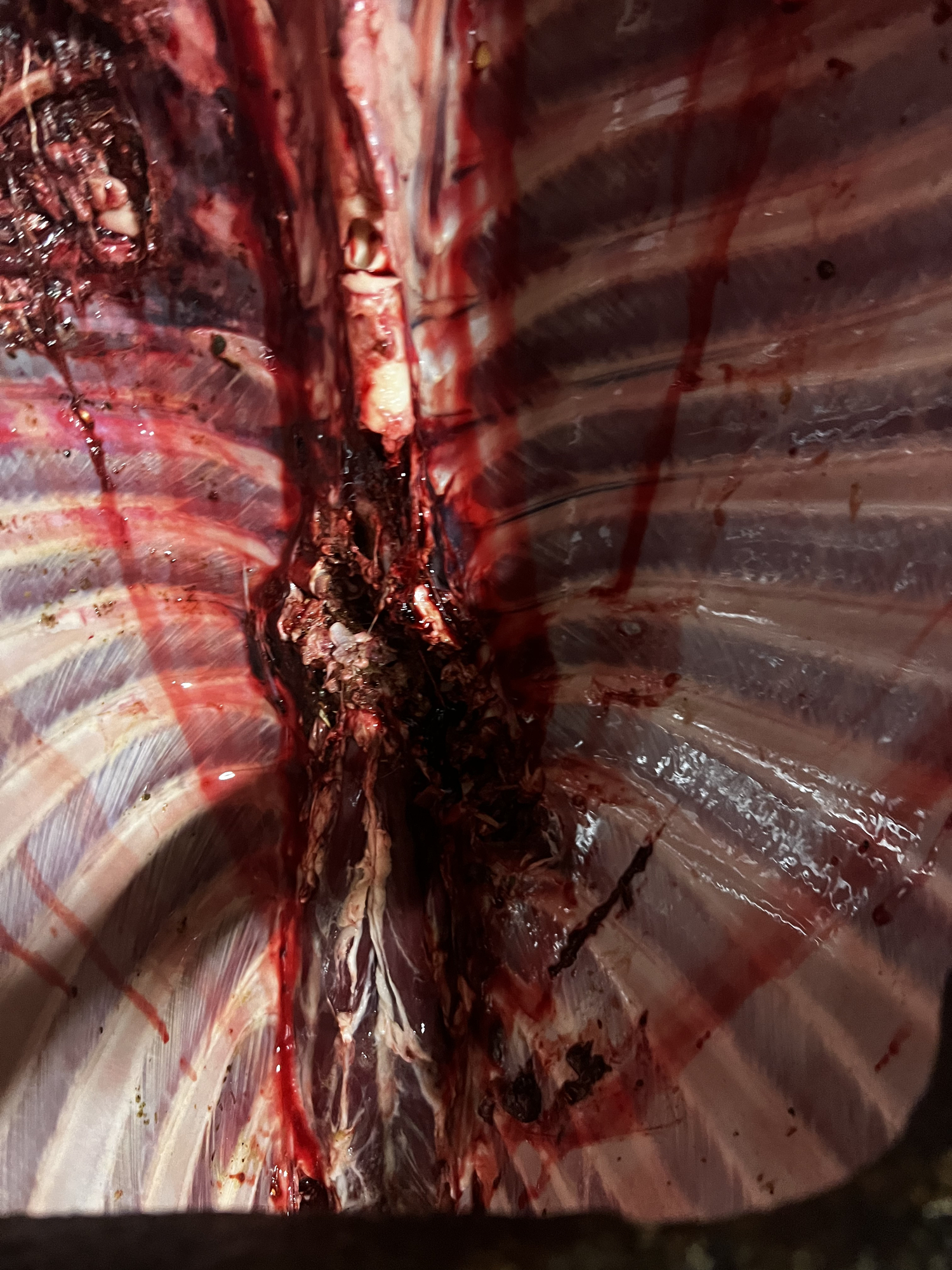 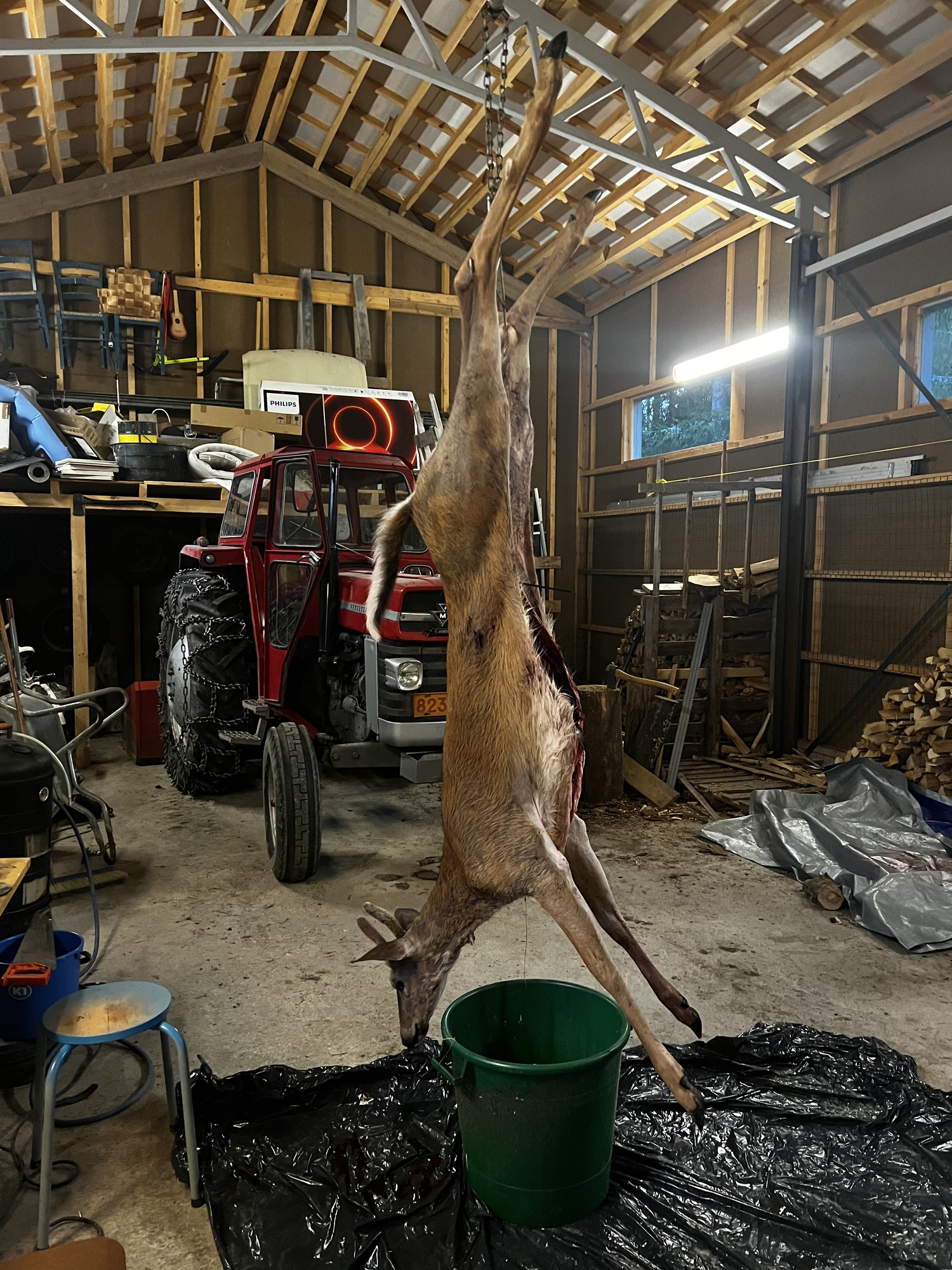 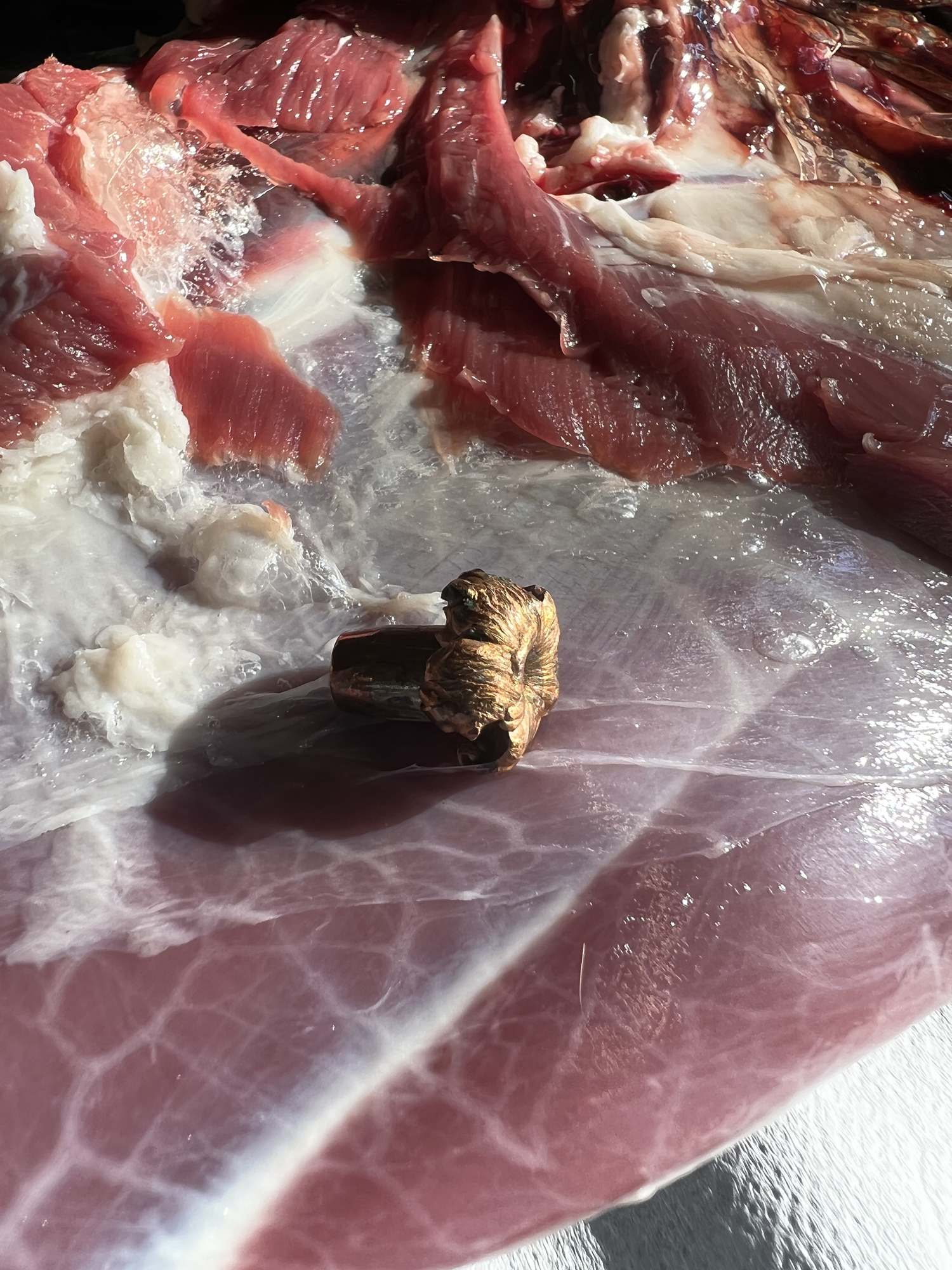