BoA Threatens to throw away flags at fallen Marines procession. 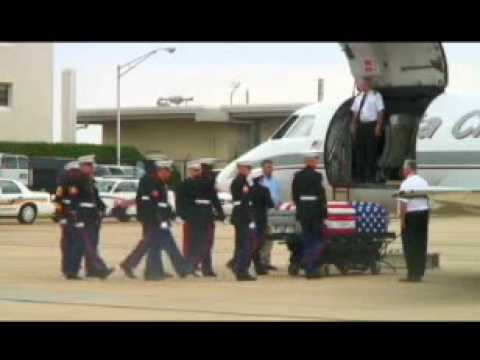 Only the faint sound of lightly marching feet could be heard as hundreds stood silent on the Greenville-Spartanburg International tarmac Wednesday while fully adorned Marines carried Lance Cpl. Chris Fowlkes flag-draped coffin. The solemn arrival began an afternoon-long procession that ultimately wound through the streets of the 20-year-old Marines hometown of Gaffney, where businesses shut down and mourners lined the streets. The homecoming came six days after the former Gaffney High School football player died in a military hospital in Germany from injuries sustained a week earlier in an explosion in the Helman province of Afghanistan. Well-wishers waved flags, saluted and shed tears as an army of police cars escorted Fowlkes family along the 40-mile stretch from the airport to the town.


Lance Corporal Chris Fowlkes was a popular and well known young man in Gaffney, and a brave warrior who gave his life in the service of his country. It was seemingly a very heart-felt and patriotic funeral procession. But all was not well in Gaffney, S.C. A South Carolina Bank of America branch is drawing criticism Thursday after an employee reportedly ordered the removal of American flags placed to honor a fallen Marine over fears that people would be offended. The Palmetto Scoop received one eyewitness email claiming that the branch manager at Bank of Americas Gaffney branch at 1602 West Floyd Baker Blvd. told a citizen who was preparing the route for a U.S. Marine killed in action in Afghanistan by placing small American flags along the roadway that the flags might upset some of her customers.
Said the outraged tipster, [The branch manager] took them down and made the citizen go in to get them if she didnt want them thrown away.
The flags were part of the funeral procession of Lance Corporal Christopher Fowlkes, 20, who died last week after an explosion in Afghanistans Helmand province.


The American flag, at a American military funeral, in a city lined with flags for the death procession should not offend a single person.
0 · Share on TwitterShare on Facebook