Six-Gun Senior MemberPosts: 8,155 Senior Member
December 2015 in Hunting #1
I grew up in Pennsylvania. I spent 23 years there. What hadn't I done during that time?

I had never shot a deer there. Moreover, I had never killed a deer with a shotgun/slug, even here in Ohio.

I've explained previously that my immediate family does not hunt. Consequently, I had never been hunting as a kid, nor had I ever made arrangements to get back there and try. That all changed when we ran into a family friend - a guy named Pat, the electrician who worked on our family home 28 years ago during our Summer vacation - in St. Thomas. We got to talking about our Fall hunting plans and he invited me to come back to a place that he hunts in Bucks County. It was a convenient stop since I could visit my sister and brother-in-law, so I figured, "why not?" So, the antlerless and buck tags came in a few month ago and we made plans to make it happen.

I took this past Friday off and drove back home. While the first morning was slow, Pat said that he expected the evening hunt to be much better. Sure enough, that night came and we had already seen one doe in the field we planned to hunt on the way in. She spooked as we walked up, but we weren't concerned. It was clear that there should be deer that night.

I got to my spot and settled in. With plenty of daylight left, a doe walked into my field oblivious to my presence. But at 108 yards, she was at the extreme end of my comfort level shooting my Benelli Super Black Eagle II (smoothbore) with rifled slugs. Though the gun was scoped with a 4-12x42mm Redfield Revolution, and shot placement wouldn't be an issue, groups at that distance are pretty rough. At 50 yards, the gun was doing respectably well on paper, keeping three shots in about a 2" group using 3" Remington Slugger 1 oz. rifled slugs through the smooth barrel. However, at 100 yards, that group was getting closer to 5". This shot was further still, but she was completely unobstructed and standing dead still. I decided to go for it.

What I didn't realize was that somewhere in my setting up, the breech got pulled open. When I went to fire, instead of a blast, I heard the distinctive sound of the action completing its closure. Now, I was going to have to cycle the bolt to reset the action. I did so gingerly, trying not to alert the deer. I heard it click shut, but wasn't sure if It was seated fully. Sure enough, I got the same clumping sound of the action closing with no bang. Again, I reset it, this time pulling it a little further back and generating a noticeably louder sound when the action closed. This time, the deer looked up in my direction, but just briefly and went back to eating. The third time, I fully opened the action, grabbed the now ejected shell and reloaded it. I got on target, knowing that a full action cycle was going to be LOUD and that I may have to fire quickly.

The action hammered shut, assuredly seated fully this time and making a helluva noise. Shockingly, the deer again looked my direction, but again went right back to eating moments later. Seeing this, I took a little more time to line things up and made a good trigger squeeze.

The shot rang out and the deer went straight to the ground as if hit with a giant hammer. I looked through the scope and she was laying there with her head quivering. Upon further inspection after the shot, it was clear that I got very, very lucky. The slug hit well high and left of the hold point. The gun was sighted in to hit 2.5" high at 50 yards to give me a 100 yard zero and maximize my point blank range. I had aimed the crosshair in right behind her shoulder, but slug impacted directly *over* it, breaking her neck. She was twitching a bit, so I cut her throat to ensure she was dead and hopefully let the heart reflex bleed her out a bit, improving flavor of the meat.

That was that. My antlerless tag was filled and my first PA slug hunt was a success.

Pat got a shot at a deer a little while after I dropped mine, but missed. He said that the red dot scope on his shotgun was just too rough for him to place it precisely at longer range and he flatout missed in front of the deer.

The next morning, we hit an archery-only spot but didn't see any deer. I did, however, spot two foxes in a nearby field and lip-squeaked them in. Always cool to see them respond to simple calling: 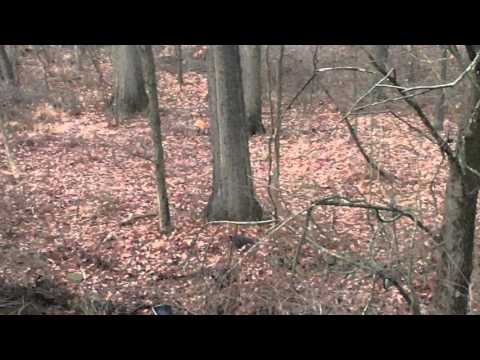 So, that night we returned to the fields where we shot the night prior, but this time I had my Colt Anaconda .44 mag as the gun of choice. Things were noticeably slower. We saw no deer walking in and nothing came into our fields at the times we saw the action pick up the prior night. Not terribly odd given that we both had shot there recently, but something felt off. Finally, with 10 minutes left in the legal shooting day, I heard noise coming from the same corner of the field where two fawns had come out after I shot my deer the night prior. That corner was very close to me this night, perhaps 30 yards. I slowly turned my body favoring that side and got the gun rested on my knee, but not yet aimed. The noise grew closer and closer and finally the creature emerged.

Though I was in orange, the guy didn't even notice me as I was tucked into the brush hard to his left. I was about to go off on him, but the mental checklist made me realize that this guy MIGHT also have permission on the place. I stayed dead still and silent. I then texted Pat, telling him that some idiot who may or may not have permission just walked right through my spot with 10 minutes left in the shooting day and was headed to him. Pat didn't feel his phone vibrate and thus didn't respond.

Pat thought that since some guy in orange walked from my field that it was me. He knows I'm not stupid enough to leave that early and thought something was wrong. He stood up and the guy saw him and high-tailed it into the woods like a freight train. Sure enough, he was just a random bozo who was on the land without permission, either hunting or cutting through. He had clearly got into the area before us and busted up the thicket where our deer were bedded, ruining our hunt coming and going.

We were furious, but it was too late to do a thing about it. We realized that since I'll be coming back for Christmas, we can go back out for late season archery and I can try to fill my buck tag. It's a shame that the idiot in orange ruined our last evening, but it made for a good excuse to try it again.
Accuracy: because white space between bullet holes drives me insane.
0 · Share on TwitterShare on Facebook