shotgunshooter3 Senior MemberPosts: 5,733 Senior Member
May 2017 in General Firearms #1
Though impending travel commitments led me to make the hard decision to forgo the SE Shoot this year, I couldn't bring myself to go the entire weekend without putting some rounds down range. As such, I set off to a local indoor 100yds range with my Savage 10 Ashbury Precision in 6.5 CM to zero and get some preliminary groups.

My barrel break in procedure was to shoot 30 rounds through the rifle. Please don't tell on me to Snake...

As you may be able to see, the bench is less than sturdy. While I believe this hindered the performance a bit, I was still able to get a decent bead on performance. 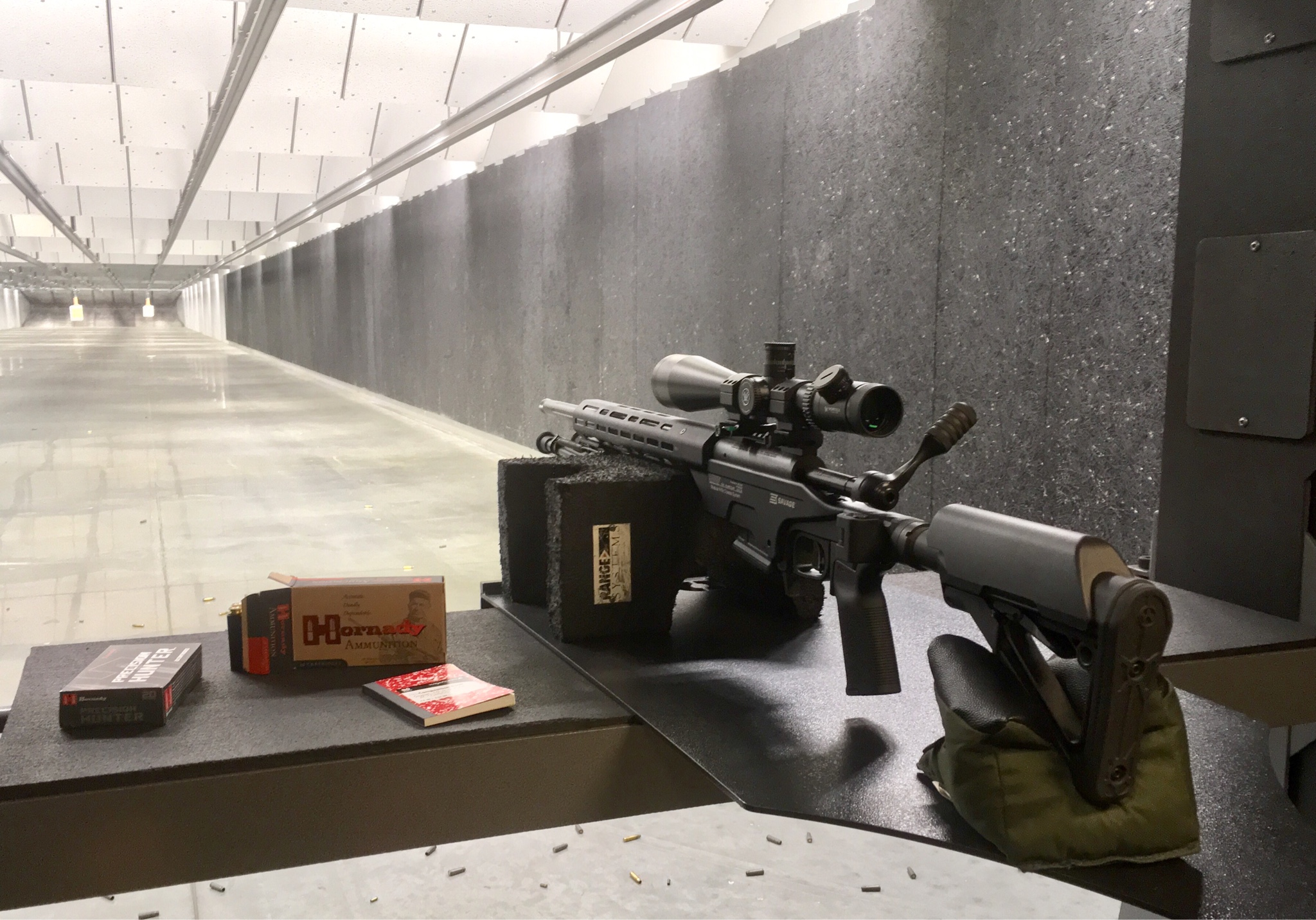 I started with Hornady match ammo featuring a 140gr ELD bullet. I quickly zeroed and then did a slow fire, 3 shot group with the optic at max power. While the group was sub MOA, I feel I can get better out if it. (Each square on the target is 1 square inch) 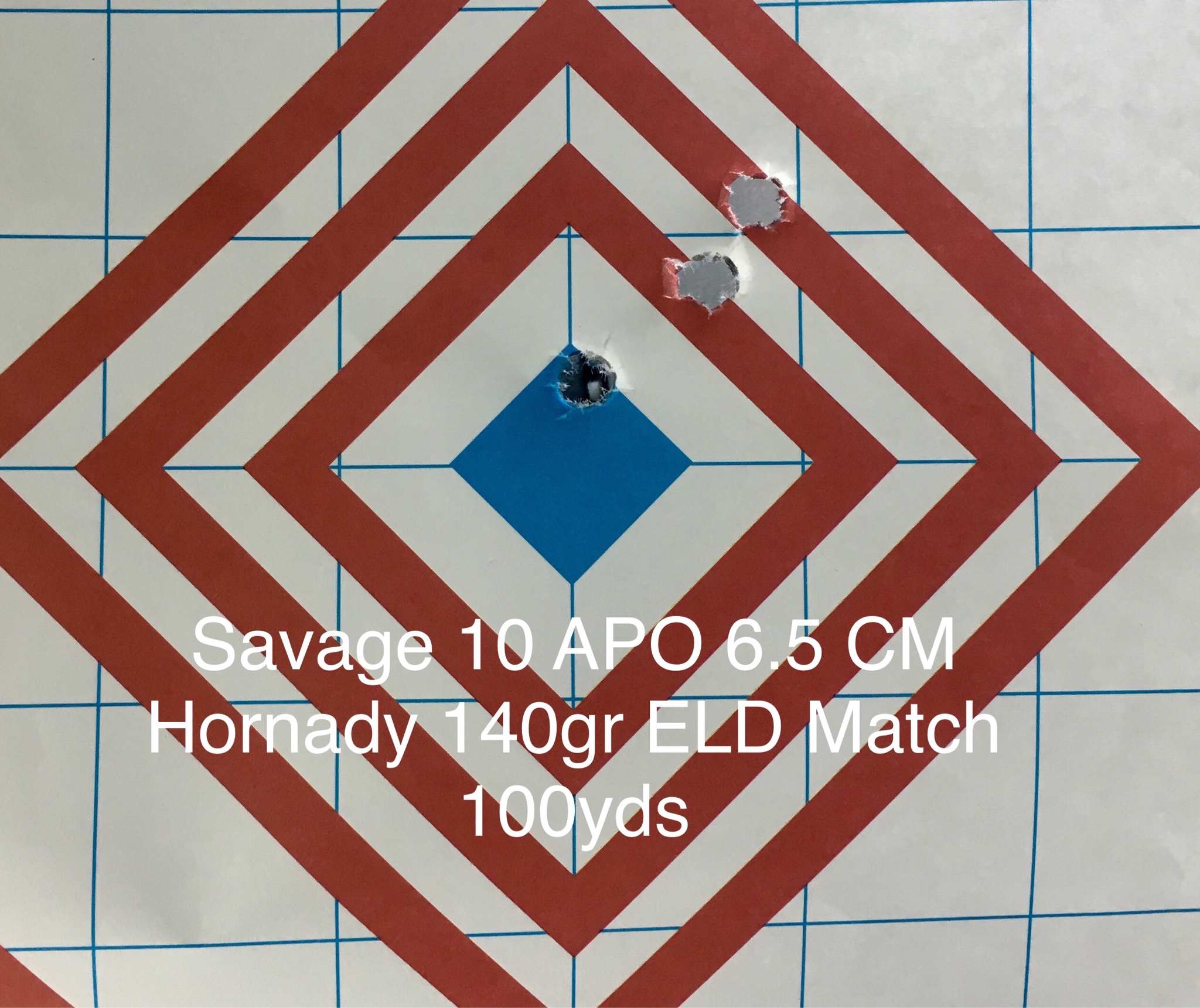 I then "shot the box" to test the repeatability of the Vortex Viper PST 6-24x50, also cranking it down from 24x to about 8x to see if it maintained zero (it did). Due to ammo limitations I shot 2 3-shot groups and 2 2-shot groups. While the angle of the paper in the photo is deceiving, I believe the optic was consistent. It is definitely slightly canted, which I need to rectify. 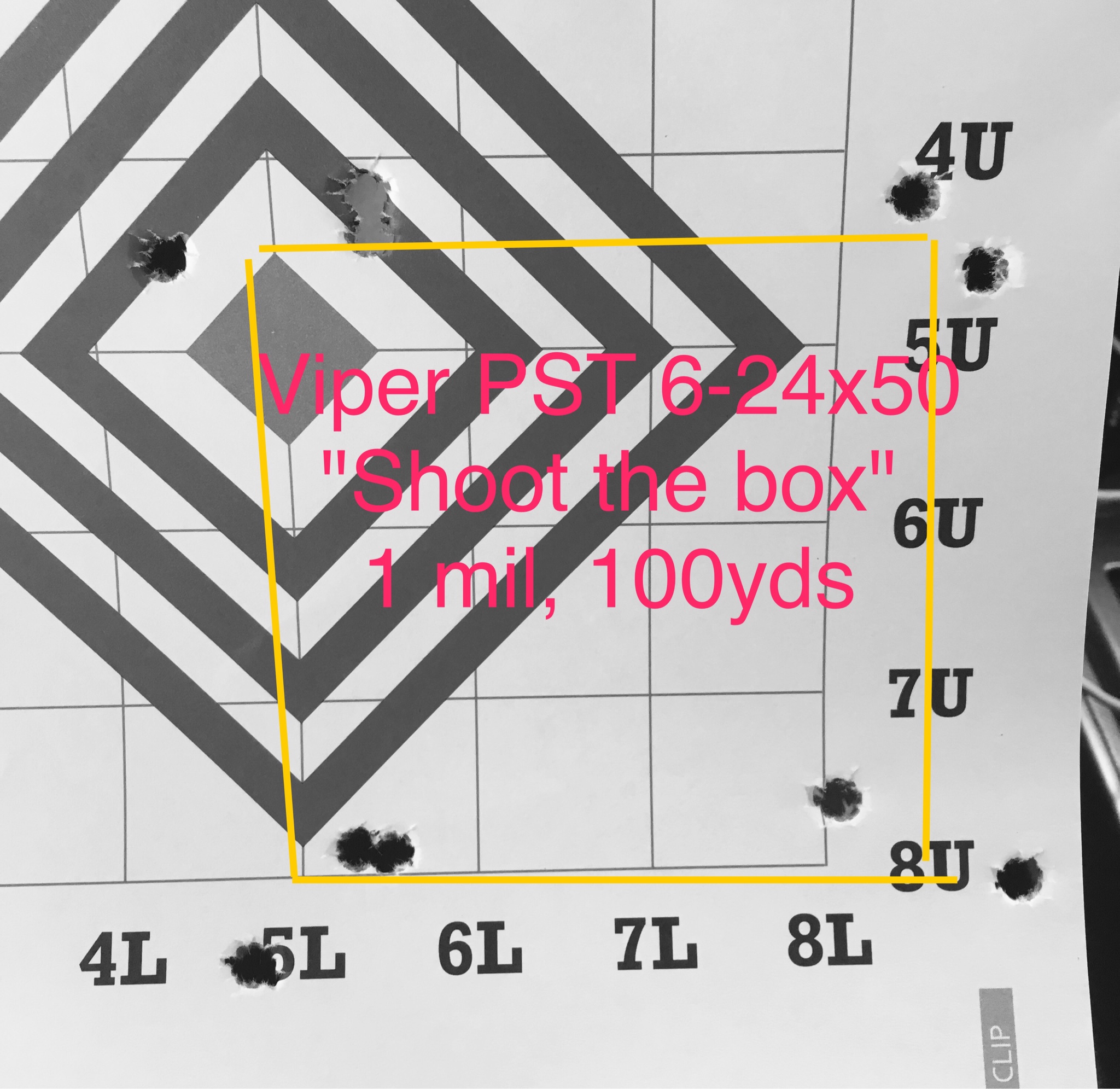 I then switch to Hornady Precision Hunter ammo, loaded with a 143 gr ELD-X bullet. I haven't busted out a tape measure yet, but the group yielded about 1/2 MOA center-to-center. This is the load I hope to hunt with, so that is promising. 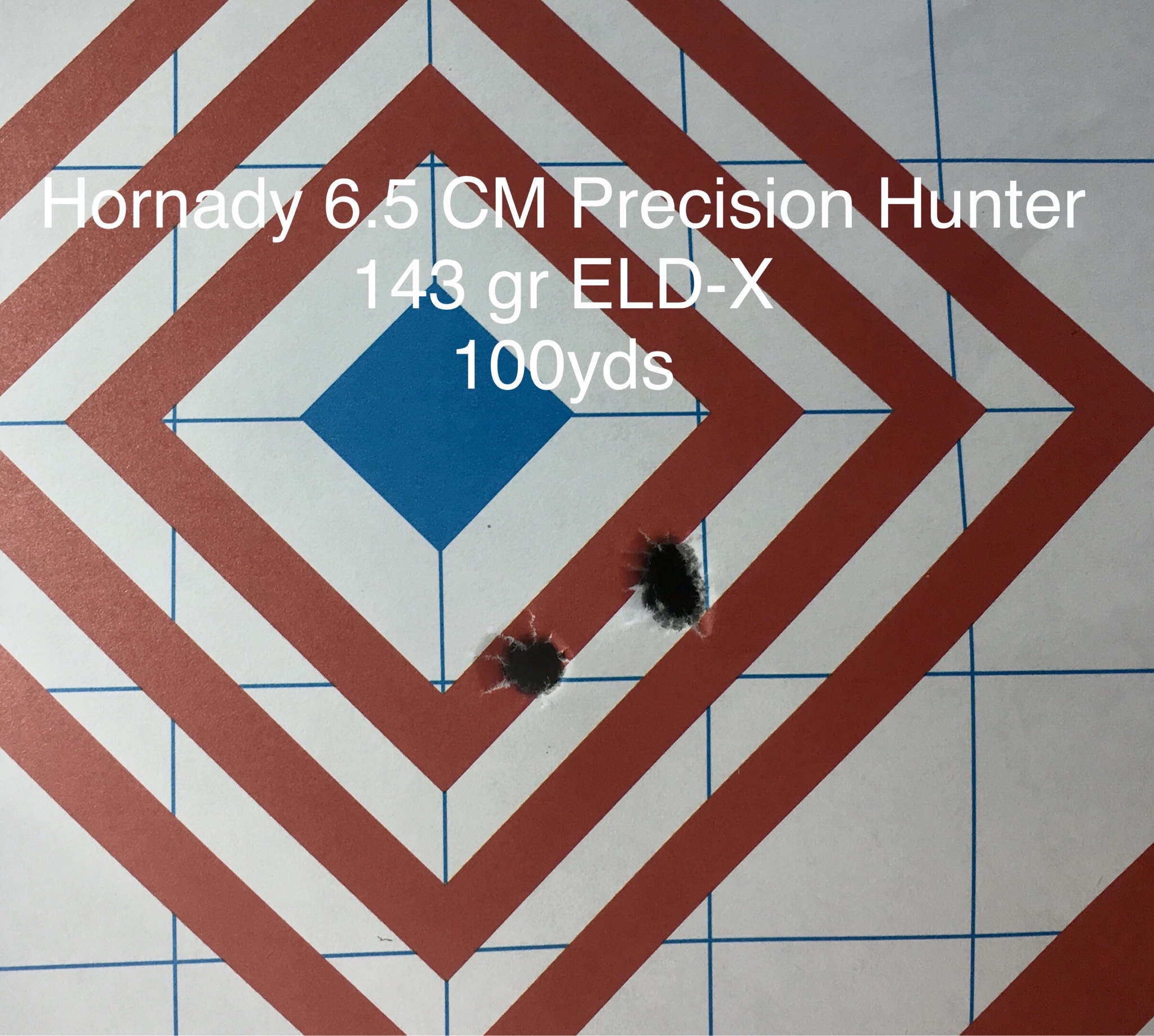 I was running out of time for a commitment I had to meet some friends at the beach (sometimes life can be hard), so I cranked the optic down to 6x and blasted off 7 more rounds of the Precision Hunter ammo. 5 rounds from the AI style magazine and then single loading the last 2 rounds. 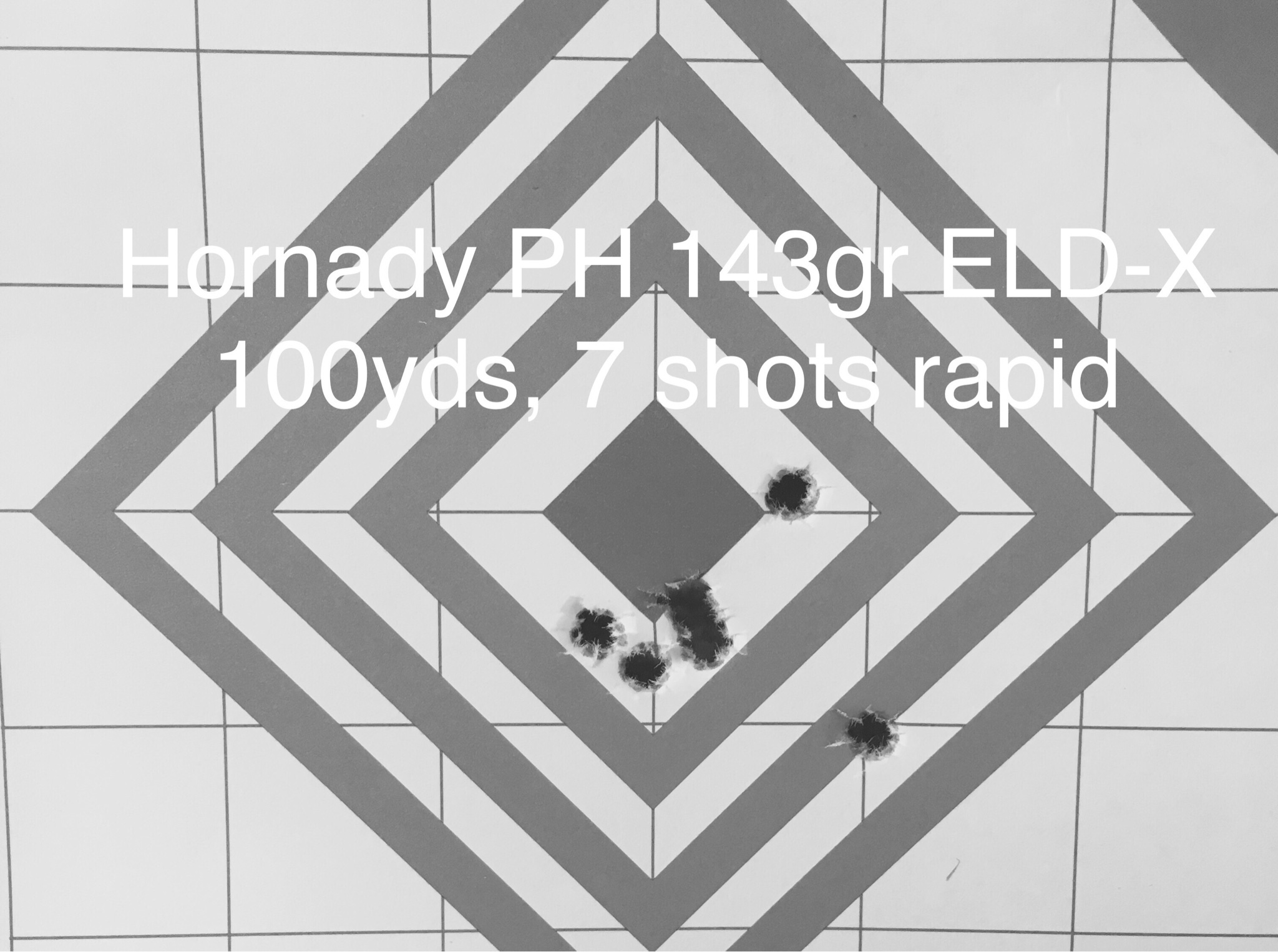 My attempt at a "through the optic" photo. 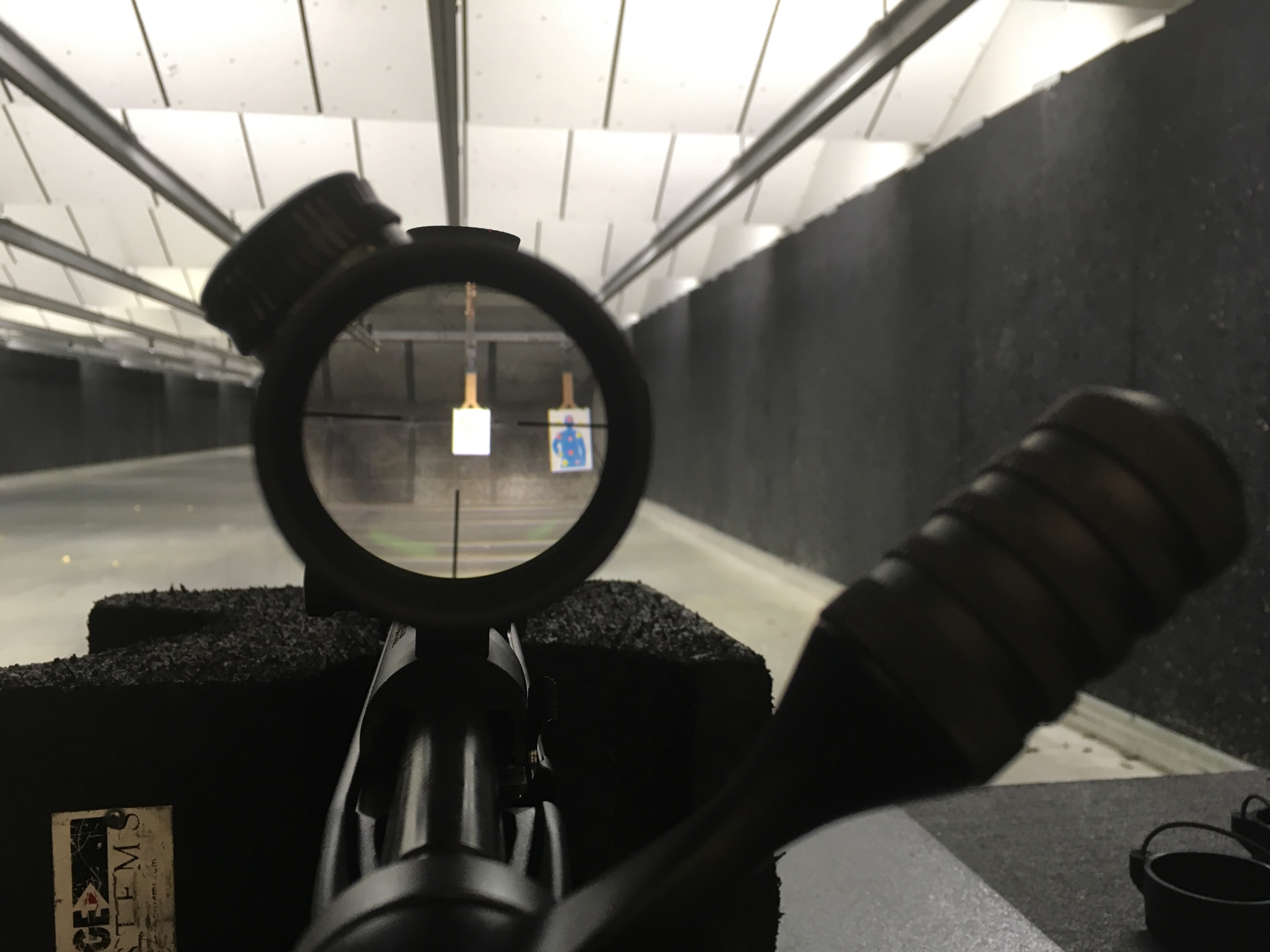 My thoughts on the rifle and round:

- The rifle shows a ton of potential. I fully expect sub 1/2 MOA from a more solid rest. Honestly though, I fully expect this from a factory blue printed action. I also need to go back and make sure all screws are torqued down correctly.

- The Accu-Trigger leaves a lot to be desired. Noticeable creep (after taking up the slack of the safety blade) and about 1/4" or so of over travel. I expected a LOT better to be honest. I will probably replace it with a Timney.

- I'm not 100% sold on the chassis. It's rock solid and the MagPul CTR with .75" riser is actually both solid and fits quite well. However, the OAL of the chassis is noticeably more than a conventional stock, the pistol grip requires it to sit higher on a bench, and it is HEAVY. I may end up replacing it with a traditional fiberglass stock and AI compatible bottom metal if I think I can sell the chassis. For now I am going to work with it and see how my opinions change with more use.

- As far as the round, count me in as a fan. Noticeably milder recoil than a similar weight .308, match grade ammo for under $27/box, and ever growing popularity make me happy I chose it.

I currently have no modifications planned for this rifle except to add a SilencerCo muzzle break for my incoming can, and potentially add a Timney trigger as previously discussed. My current goal is to stretch it out further (I have access to a 1000yds range) and give a Precision Rifle Series match a try.
- I am a rifleman with a poorly chosen screen name. -
"Slow is smooth, smooth is fast, and speed is the economy of motion" - Scott Jedlinski
0 · Share on TwitterShare on Facebook