Ernie Bishop Senior MemberPosts: 7,425 Senior Member
January 2018 in Hunting #1
Recently I was able to spend some time with longtime friend and hunting buddy, Steve Hugel. I had a couple of days to spend which also landed on his normal days off. We decided to do some coyote hunting and to shoot at some unsuspecting rocks and prairie dogs to stretch out my new center-grip 6 Creed XP-100. Carbon Six Fast Twist barrel 15.75”, Trued XP action, McMillan stock, Dell trigger. Chris Rhodes/Bayside Custom Gunworks did all of the work. Shooting some 105 Hornady A-Max’s, Hornady 6 Creed brass, Fed match primers, and H-4350. Burris XTR-II 4-20 with the SCR MOA reticle. A good friend, Dan, did the load development and got the ES down to 7, with the 105 A-Max at 2700 fps. 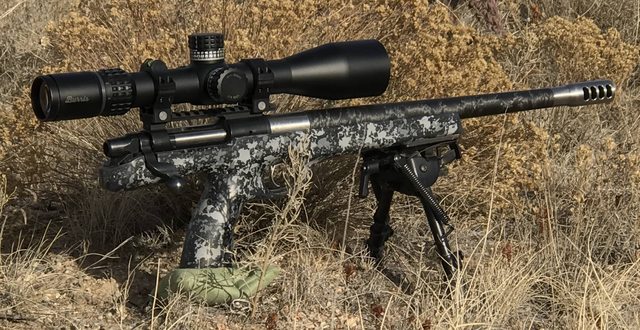 Once we got east of Pueblo was to set up some portable steel to confirm 100 yard zero and further out. When that was done, we started coyote hunting. The coyote hunting was basically a dry run with the exception of one stand, where Steve called a coyote in from beyond 1000 yards. It was the perfect scenario, as he came in slowly, instead of on a dead run. Steve stopped him at about 220 yards with a bark. I told Steve to stop him there because he was going to wind us soon, and the terrain could have hidden him, if he would have gone much further. It wasn’t quite a frontal shot as he was angled to us slightly. When the 105 grain A-Max hit him, he dropped immediately. He was a large male, weighing around 25 pounds, which is about as big as they get around the Pueblo area. This was the only coyote that came in, while we were hunting, but we had more shooting fun with the 6 Creed XP. 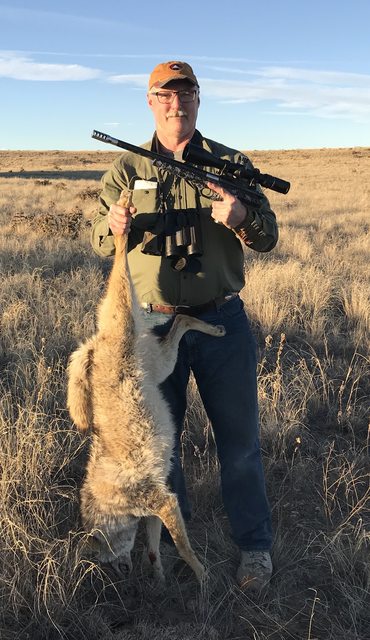 Since I had not confirmed drops before I spent time with Steve, we did a little further each day. On the first afternoon, I shot out to 330 yards on steel. I doubled two shots (which were high on the steel) and used my SCR reticle and made the correction. I modified my muzzle velocity to 2780 fps, and modified my paper drop chart accordingly. At the end of the first evening I shot at 493 yards at a small rock to the right of a bush (Notice the bullet furrow at the left edge of the rock) and then a cow pie at 607 yards. These two shots were made from the sitting position (I did have a compact stadium seat for back support) using Bog-Gear and the PSR top with my Low-Pro field bag in very low light. Drops were spot on out to 600 yards any way. End of an enjoyable day with Steve. 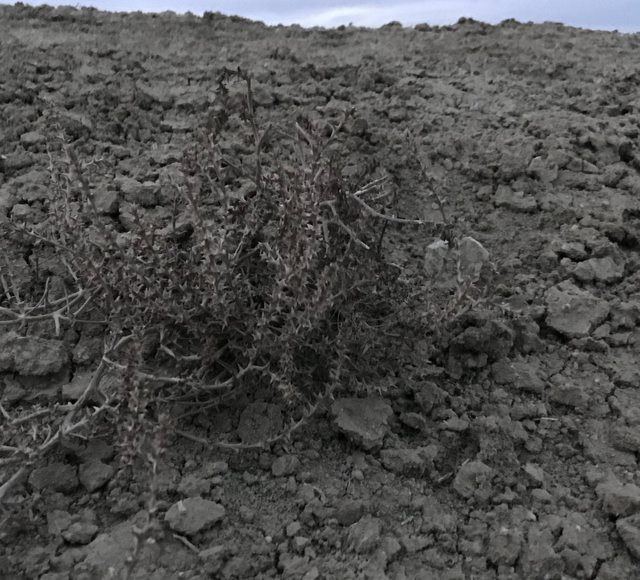 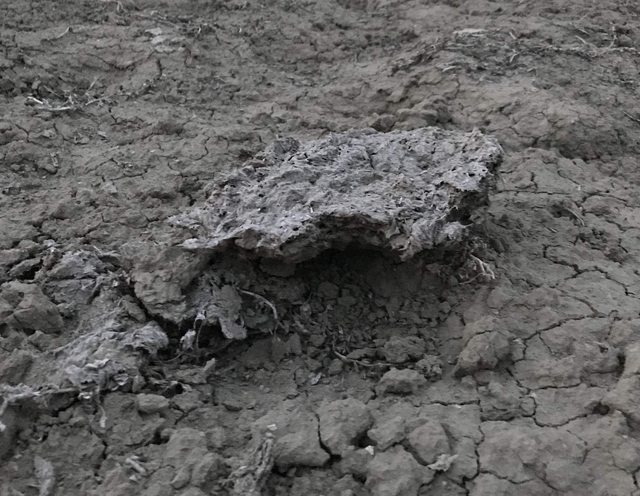 On day two we went further east in search of coyotes to no avail. At around 1:00, as we were getting ready to head back into town, we decided to look for some unsuspecting rocks to shoot at further out. Couldn’t find what we were looking for, and finally Steve said that he had some prairie dogs, but they were quite a ways out there. 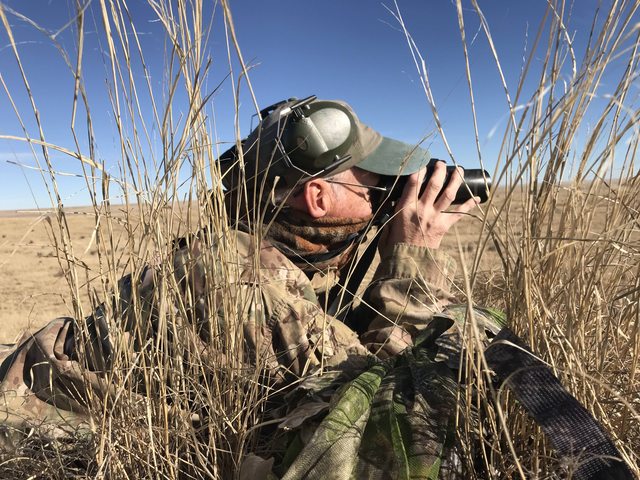 I started looking between 700 and 1000 yards and didn’t see any. Steve let me know, that was not far enough and directed me to them. The range was 1380 yards. We had some wind quartering and at first, I thought, “this is crazy.” I took out my ballistic app on my phone and began plugging in data which was 55.25 MOA for drop. Wind was for a right wind condition and was 12-14 MOA. I know it was past 11 MOA for sure. I was set-up the same was as I was the night before. At the shot Steve said he did not see impact. We started talking about where I shot and we realized were on different dogs. Now, were are on the same page in terms of the dogs we are looking at, and Steve called a foot right (Basically, a 1 MPH correction). I was a bit stunned and overjoyed the drops were spot on, and fairly pleased my wind call was close. I had never shot this far seated with the Bog Gear/PSR. I told him I was going to send another, then we were going to hike back the rig, grab lunch and look for more coyotes. I could not see my own impacts with my rest set-up. At the shot I waited for Steve’s call, and was gratified when I heard him say, “I think you may have hit him.” Prairie dogs will do this shimmy movement when hit, especially penciled, as the A-Max was at 1056 fps for an impact velocity. He told me if I didn’t hit him, I was right beside him. He said he would run out there and check. I told him there was no reason to walk just under 2800 yards to see if I hit a pd. I wanted to get going for more coyotes. Given the lack of coyotes that evening, I am wishing we had walked out there and checked. At least I knew my drops were spot on! For me, that was the two most gratifying shots of our time together. I tend to do something more than I had done in the past when I have been with Steve, and this mini get to together wasn’t any different. On the following day as we were getting ready to move to another location there was another rock in the 800 yard range that was begging to be shot at. There was a front moving in and we had wind form the north. Again, my drops were dead on but I over-doped my wind by a substantial amount (3.25 MOA). I made a big mistake by not checking the movement of vegetation or lack of it at the target. Humility is often just a shot away when playing at distance. 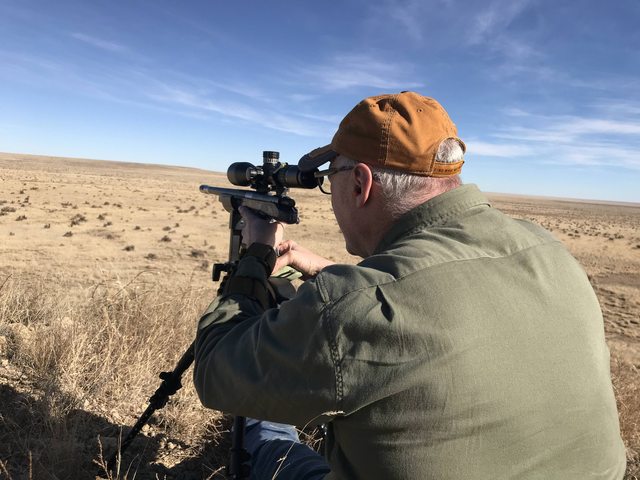 The Bog Gear tri-pod has a modification that makes all of the difference in the world to me for stability. Chris Rhodes tapped the head of the tripod and put a U-Bolt, so I can lock down horizontal and vertical wobble. In the future, I will begin practicing on steel at further distances with this set-up. It truly is a game changer, for times when you cannot shoot form the prone position. I also was able to use my new Gunrunner Eberlestock back pack that Emily got me for my Birthday. The scabbard works great with a specialty pistol! To date, this is my favorite way to carry my specialty pistols, when not carrying it. Even when I bent over it stayed put. Look forward to using this pack more.