orchidman Senior MemberA true 'Southerner'. NZPosts: 8,402 Senior Member
May 2018 in General Firearms #1
Bought a V3 as mentioned in an earlier post a few months back to replace my aging 1187's.
Initial thoughts were that Remington finally had a replacement for the 1187 instead of the Versamax which was larger and seemed 'clunky' to to me.
Got it home and stripped it down, oiled it up and apart from a couple of shots at the range to pattern it with my duck hunting load It sat in the safe till the first weekend of Duck season at the beginning of May. I also spent about 30 minutes a couple of nights before the season opener just swinging it up to the shoulder with my eyes closed just to get used to the swing. Everytime I did this then opened my eyes the gun gave me a perfect sight pic  .....( not that I ever look at the sights when field shooting)
Opening day was clear skies and no wind. The first bird that came into the decoys dropped at the first shot. so did the second a few minutes later followed by no 3 4 & 5. I was impressed. The gun handled almost identically to my 1187 despite the fact that the barrel was 2" longer.
Because it was slightly heavier at the muzzle it took a little more effort to 'git her moving' but that was balanced by the extra weight which assisted in swinging on faster passing birds.
At the end of the weekend I stripped her down and gave her a thorough clean. Shooting over 'salt' is hard on shotguns. One of the major problems is loading cartridges  when you have salt on your hands..........it gets deposited in the chamber and can form surface rust pretty quickly. An inspection of the chamber showed that it only needed a quick run through with a soft wire brush to make it look like new.
When I stripped it down, I found that one of the gas compensation plug assemblies was hard to undo however a coating of oil soon had it smooth again...........more about that below.
The bolt is Parkerised...........and it was already showing signs of surface rust, as was the magazine end cap. A quick wipe with oil, a scrub with a non metallic pad and a re-oil had it looking like new.
This did annoy me as all my 1187's had chrome bolts which didnt have that problem.
Fast forward to the second outing. After putting a few more rounds through it I found that it took more pressure to feed the magazine ie to fully push the shells home. I am hoping it will get smoother with time as when my hand/thumb was  cold and wet, I did find it awkward to reload quickly.
I like the magazine cutoff which allows you to empty the chamber without feeding another shell out of the mag. It came in handy when dealing to wounded birds as I could use up some old ammo in a smaller shot size.
The big test was this last weekend. As I described in the hunting thread the weather was atrocious, Torrential downpours and icy cold winds. At times the V3 ended up being completely exposed to the rain and salt spray. And that created another problem.
There are 3 gas ports on either side of the forend just in front of the receiver and the face upwards. With all the water around, the first shot after a shower would spray gas/water up into my face..............which meant that I would have to clean my glasses regularly.
At the end of the shoot my eyes felt quite gritty.
However, during one of the thunderstroms  and while I was sheltering under a cover with the V3 across my lap I tried to roll a cigarette and ended up dropping a pile of tobacco into the breech area..........Of course, with the rain it stuck and I didnt want to field strip the gun in those conditions so I made do with using a twig to remove what I could. It didnt affect the gun in the slightest.................................................and it still cycled perfectly.
I periodically checked the breech and noted that the 'oil.  was more water than oil. Manually cycling the bolt showed it to be a bit sluggish but it performed perfectly when fired.
Now the bad bit.
Got home last night and completely stripped the gun down.
When I tried to take out the gas compensation plug assemblies, the right hand one came out easily. The left hand one however started easily and then began to bind until it locked up with moderate pressure. I screwed it back in and threw some oil at it then was able to unwind it another half turn before it locked up again. By continuing this process I managed to get it out....and discovered this 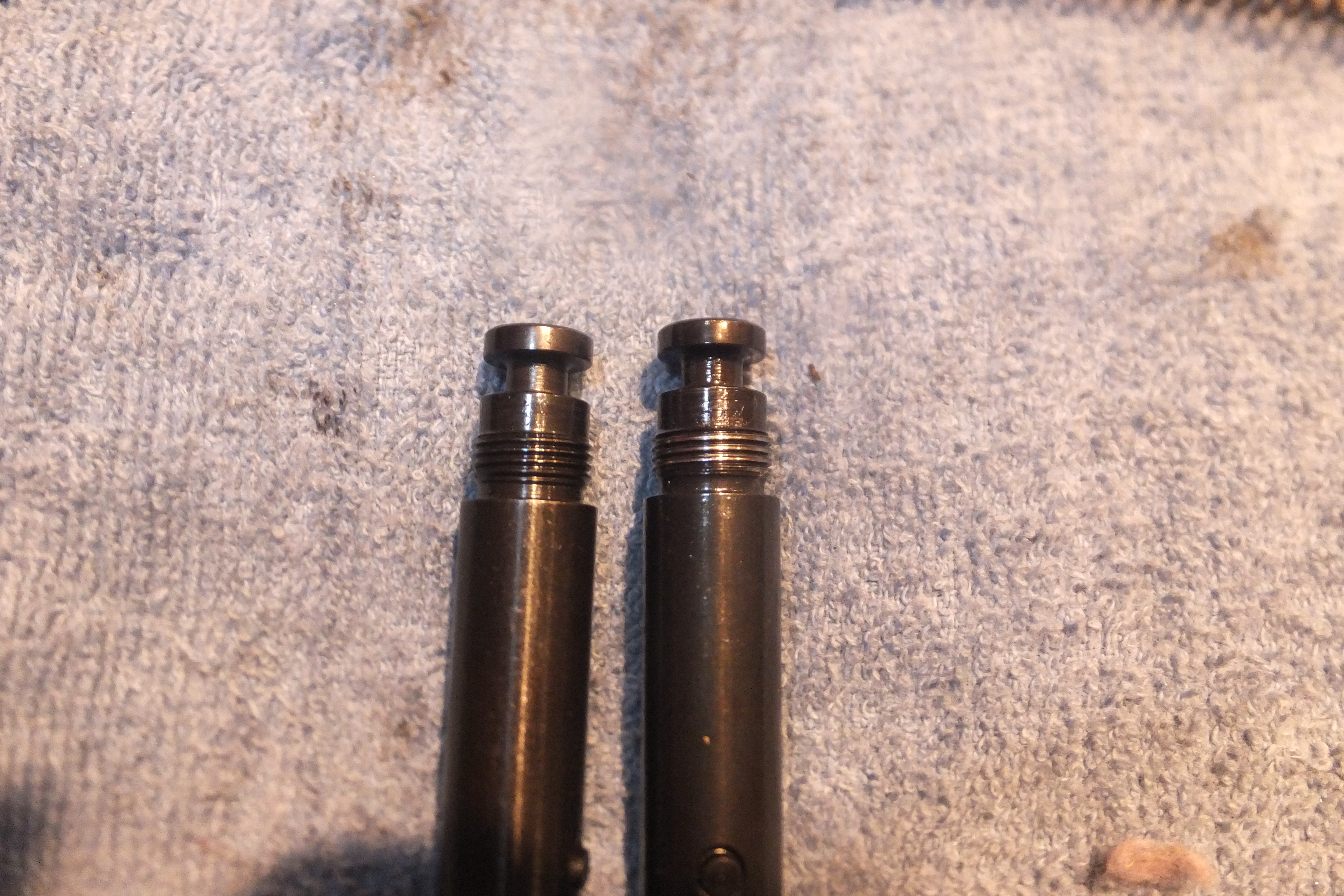 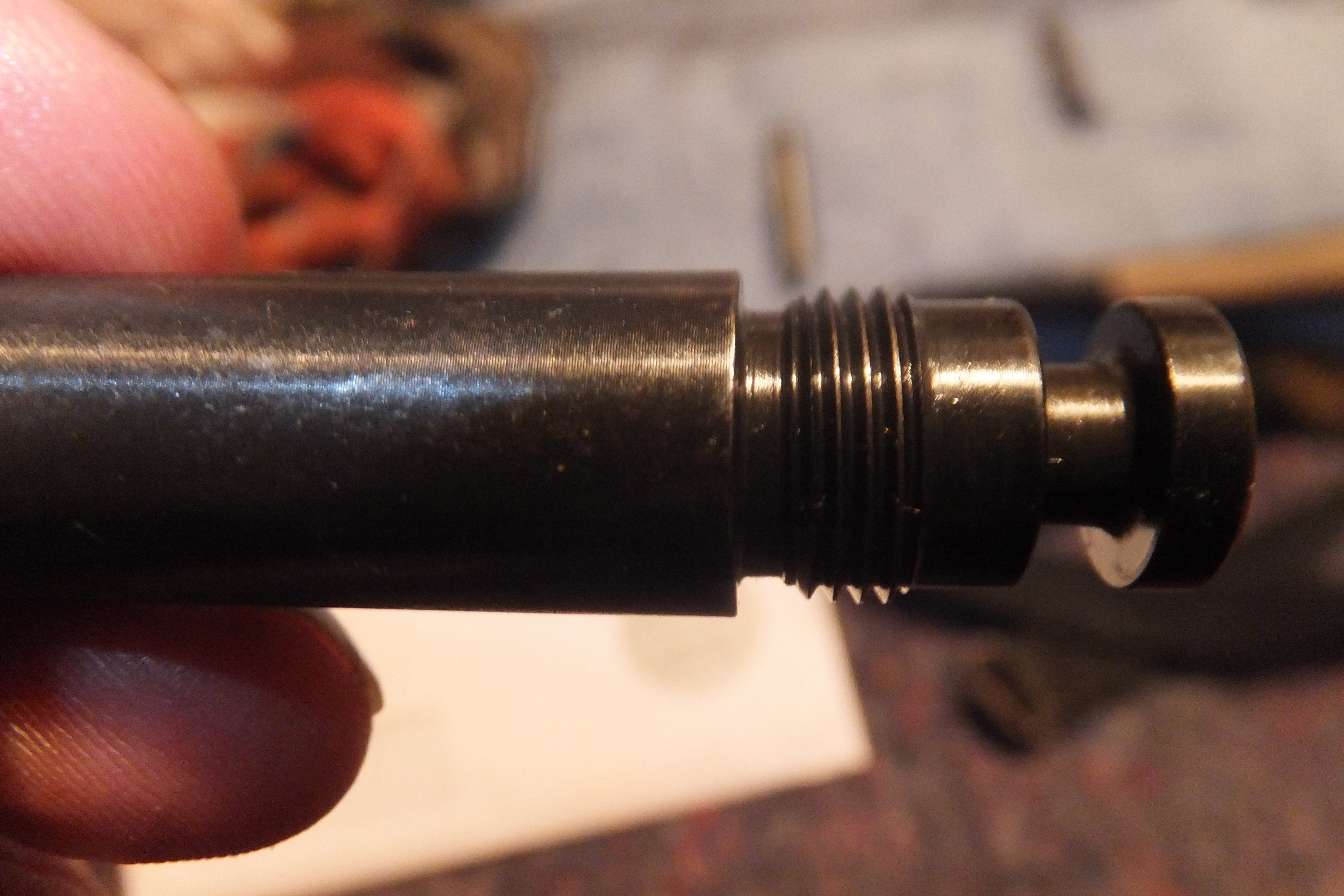 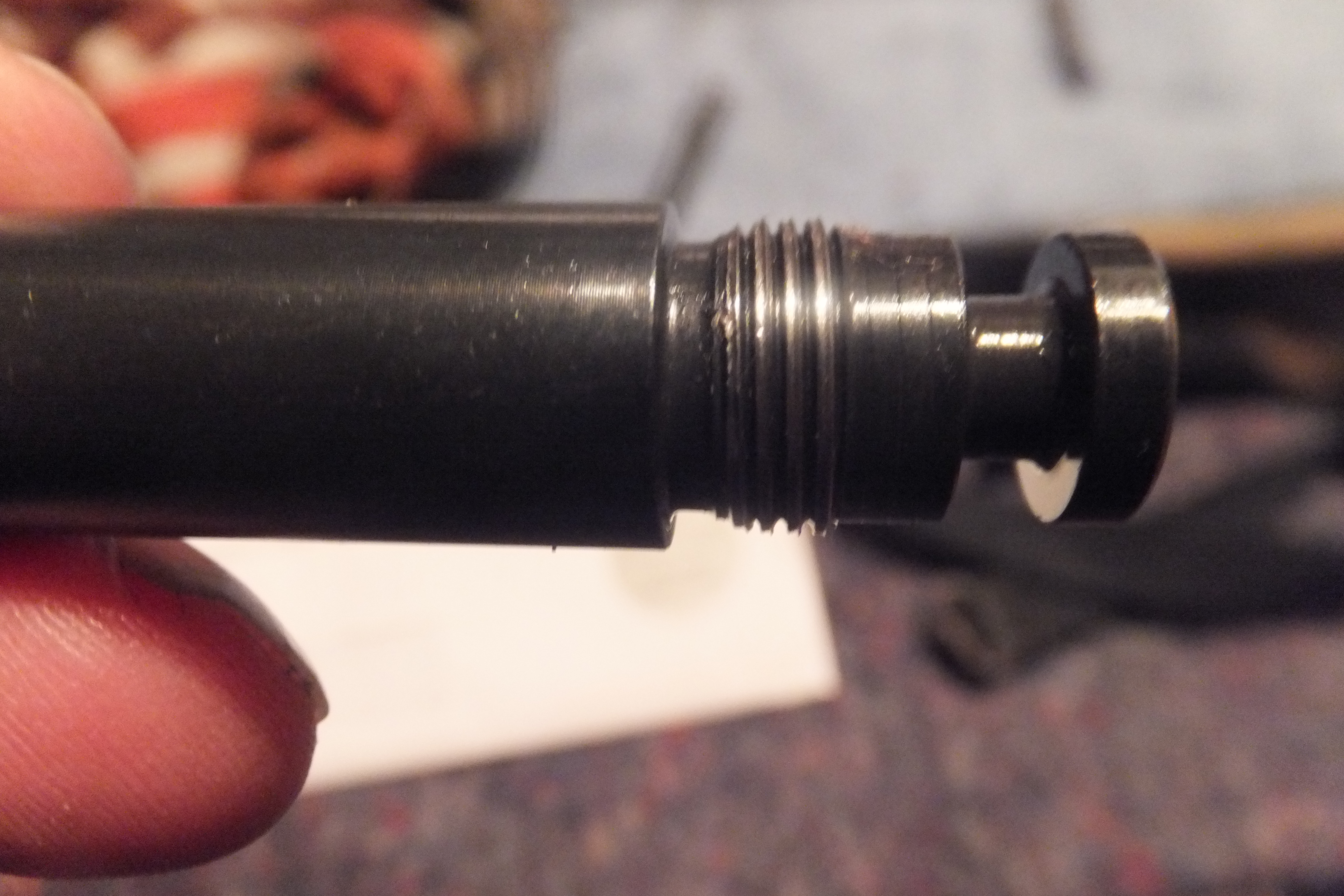