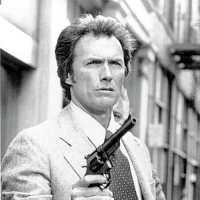 DirtyDevonHammerhand MemberPosts: 37 Member
May 2015 in Clubhouse #1
For 2 decades Clint Eastwood most Favourite cop role to his fan did 5 movies. If Clint Eastwood did another 6th Dirty Harry movie & last one before his 70's. I was the title Out of the ForceOr Unfinished Business Which story tells how he would finish off the bad guys out of the streets to the deaths. In the end he quite the force for good. You can do your own Dirty Harry 6. I read a few years ago the rumour of his movie Gran Torino can never be a Dirty Harry movie. But I glad it was something else. Reason why I put 1990 t0 2008 because from 2008 rumour has he was going to directing only. Talking of that like his 4th Dirty Harry movie Sudden Impacthe was to direct it as well. The desert Eagle 44magnum is to be featured as his new action gun but his S&W model 29 44 magnum will be in it.