Six-Gun Senior MemberPosts: 8,155 Senior Member
December 2018 edited December 2018 in Hunting #1
Please forgive my slacktitude, fellas.  I am 2 weeks late posting this one and failed to get some pics from the field along the way.

The regular Montana hunt went down this year, but with a slightly different twist.  Neither I, nor two of the regulars in my group, drew either-sex combination licenses this year.  One guy decided not to go as a result, but me and my friend, Rich, put in for and drew mulie doe tags.  We also bought over-the-counter whitetail doe licenses to make the trip more worthwhile.  One new hunter with our group, my friend Pat from Pennsylvania, did manage to draw his and a mulie doe tag (and he bought a whitetail doe tag, too).  He and my Rich bought turkey licenses, as well.  So, despite the bad luck in the combination license drawing, we had legitimate hunt on our hands.

Pat and I met Rich after stopping South Dakota for a couple of nights so I could fill the SD doe tag that I posted about a couple of weeks ago (the same one dropped with the .375 H&H that Caleb made for me).

Long story short, despite significantly diminished deer numbers in Montana due to a double-whammy of a 30% winter kill last year and a summer hit of EHD, we filled all 9 tags (7 deer + 2 turkey) across the group. 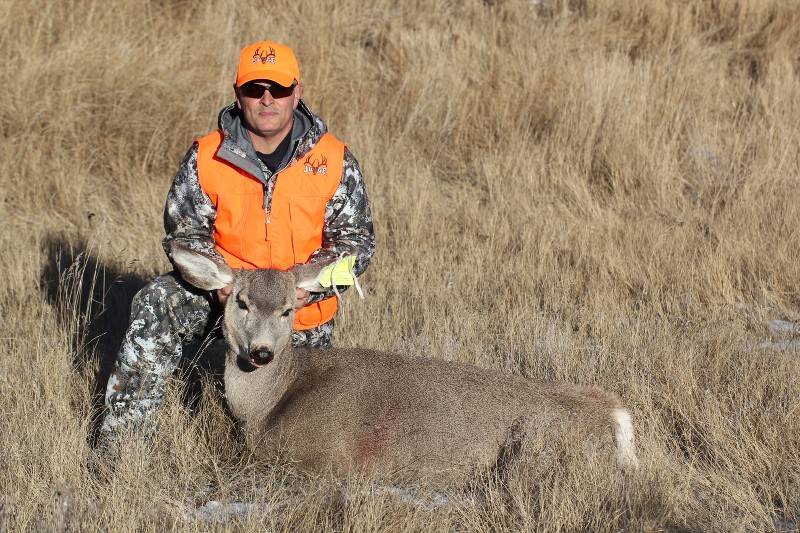 Rich shot his mulie doe only a couple of minutes later when we stalked up on the very same doe herd that Pat had just got his doe from.  One shot from His Remington 700 SPS in .243 Win was all that it took: 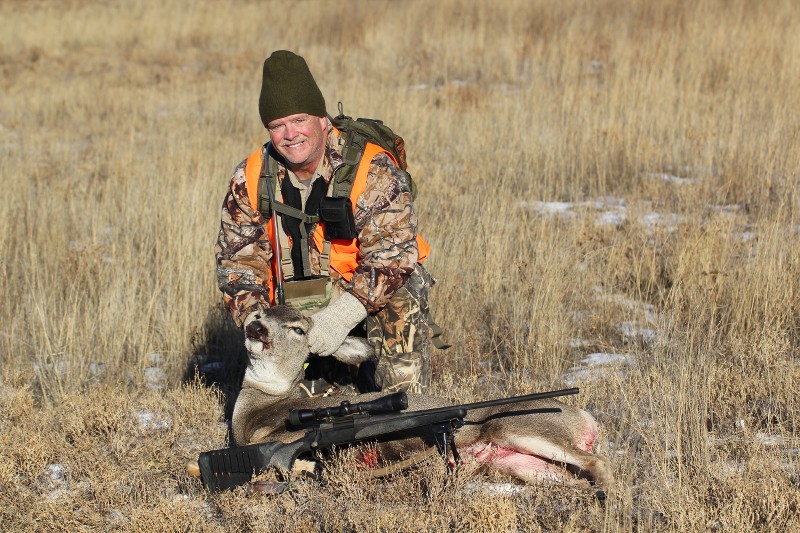 Rich got his whitetail doe later that night, but he didn't take any pics before nightfall came.  He also knocked a turkey down the following afternoon but we literally forgot to take pics.

The following day, Pat scored his turkey on a very fun stalk.  It was a tough hunt day due to very high winds, which put pretty much every animal in the area into deep cover.  We walked a few dry creek beds looking for birds and finally spotted some about 120 yards across from us.  We crossed the creek bed and went into a low stalk across the top, periodically looking for a turkey head poking up.  Finally, we found them only about 30 yards below us.  Pat set up for the shot and hammered a Jake. 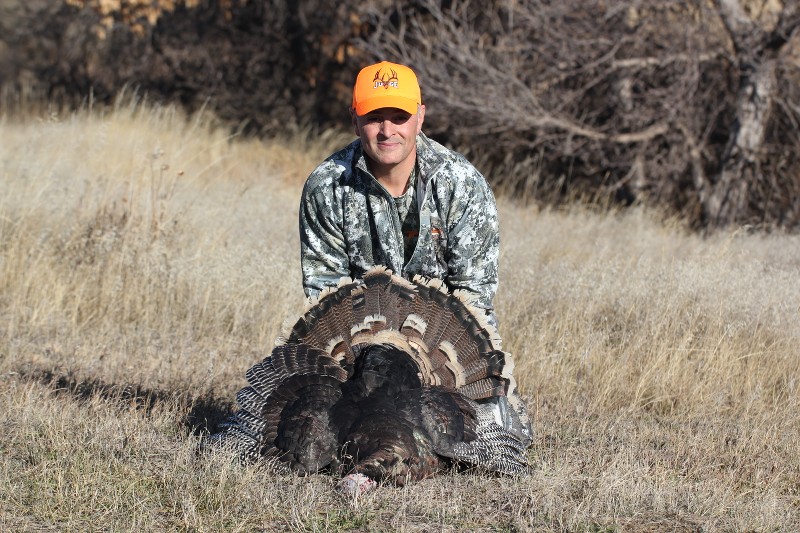 With the high winds, even finding usually plentiful whitetail does was harder than expected.  We got a lucky break when we were driving from the turkey spot to another part of the property when I caught a shape hidden in the downwind grass by an old, broken down ranch house.  I had Rich stop the truck and let me out.  After a brief stalk over a hill to get a better look, it was clear that a whitetail doe was feeding where I had been looking from the truck.

I motioned back to the vehicle to have Pat head my way with his rifle.  It was a 100 yard chip shot, and the only delay was waiting for the doe to turn broadside.  He placed a perfect shot with the Steyr and now only had one tag left to fill: 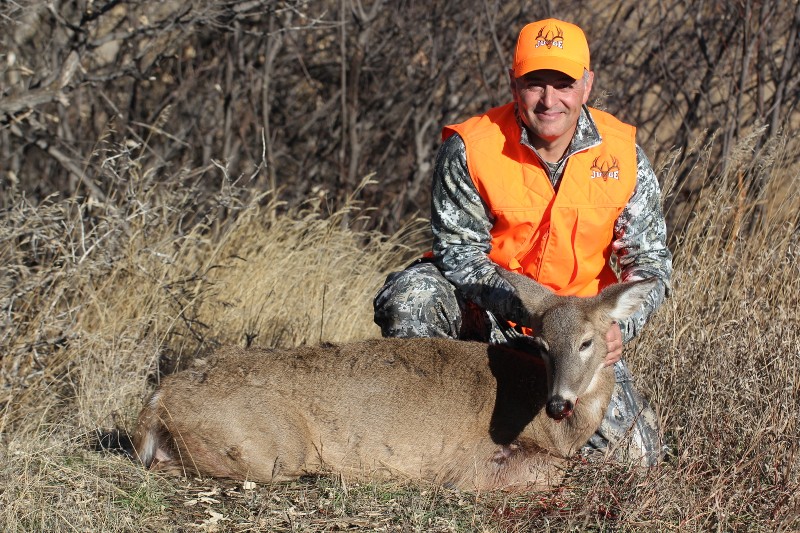 I ended up killing my whitetail doe that night that very same.  Believe it or not, I actually borrowed Pat's gun later that night.  I had never killed a deer with a .270 and decided it was my turn to become the butt of the joke around here!  No pics, unfortunately, as we were in a race to get this one to the processor, but I assure you, it looked...just like a whitetail doe.

The next day, I shot my mulie doe on public land.  While I didn't get any pics after the kill, Rich got a really cool picture of my with my Tikka T3 Lite Stainless in .243 Win just seconds before the shot: 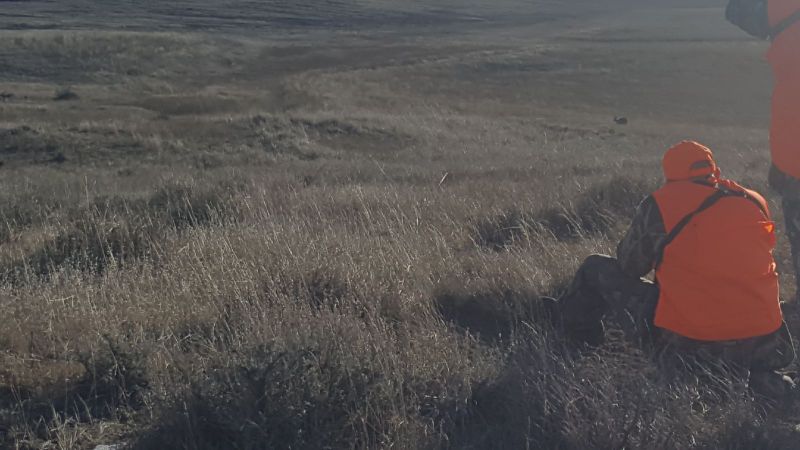 We were making great progress on the hunt, but Pat, after turning down a few chances at some decent bucks, was running out of time.  Worse, with deer numbers down, we simply weren't getting many looks in the usual places.  We only had one more morning left to hunt, and decided to take a chance and try a totally different, much deeper part of the private land we had access to in order to make it happen.  It was going to be a relatively long hike in to even get there.

That last morning, Rich headed home while Pat and I made one final play to try and fill his combination tag.  While sitting a high field, we spotted a group of deer over 1,000 yards away.  A closer look with our glass showed that one of the three deer was a buck, and a pretty good one at that!  Looking at the terrain between us and the deer, I immediately knew that we could put on a successful stalk if we hurried.

With the benefit of a dry creek bed covering us for most of the way, Pat and I made a hasty move to close the distance.  Once the creek bed ran out, we started working on the final 374 yards between us and the buck using sage bushes, easing closer one brushy move at a time.  By this point, the buck had bedded down, keeping a watchful eye on the ground before him while the two does accompanying him fed.

When we were nearly inside of 200 yards, I peeked up and saw that buck was suddenly standing broadside facing us.  I didn't know made him alert, but I told Pat that he needed to set up for a shot immediately.  Just as Pat got on his butt for the shot, a fourth deer that was apparently bedded less than 15 yards in front of us exploded into a run!  We had no clue that deer was even there, but managed to get insanely close to it before it bugged out.  Perhaps its agitation is what alerted the buck to our presence, but by some miracle, the buck didn't spook.

After waiting for his heart rate to settle from the long, rapid stalk, Pat finally had a steady gun and let one fly.  The buck - a lovely 8-point - was hit through the heart, staggering just 20 yards and going down for good.  The final tag was punched, and Pat, on his first ever Western hunt, had successfully filled all 4 of his tags! 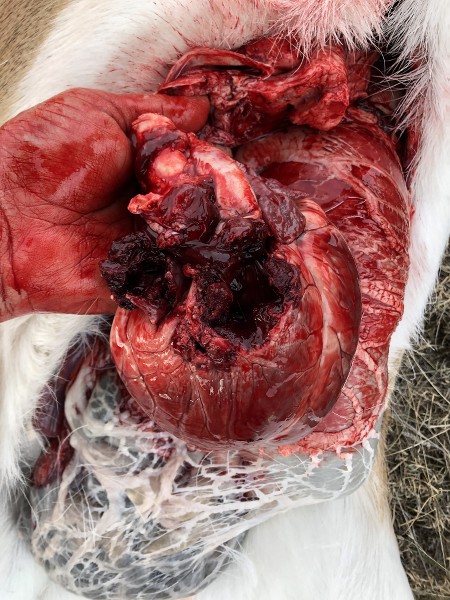 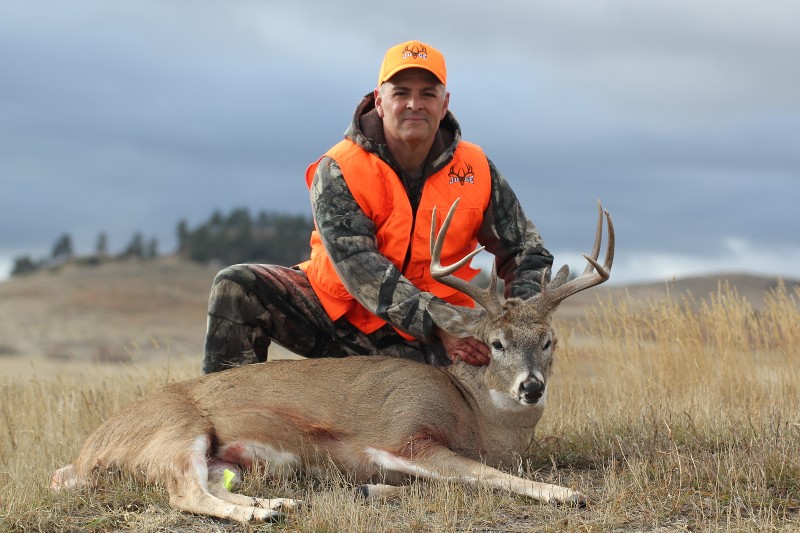 Rich and I were thrilled for Pat.  He has a great attitude and fit right in.  He helped me score a doe at his regular spot a few years back when I was back home in Pennsylvania and had very short time to get it done, and I wanted to give back to him by taking him along on this hunt.  As a Pennsylvania hunter, he is accustomed to days in the woods where he sees absolutely nothing due to the thick woods and much higher hunter pressure.

What Rich and I considered a tough year by Montana standards had Pat totally blown away.  There was never a day without game in sight, even if it was less than usual.  As a guy who works hard in the field and is willing to walk far to get away from the roads, he has the goods to hunt in such a sprawling landscape, even in a down year.  He said that he absolutely wants to get back out there, and we'd be happy to have him again anytime.