Zee Senior MemberPosts: 24,356 Senior Member
November 2020 in Hunting #1
Many moons ago, some dude who collects junk came out to Texas with a friend to hunt pigs with me. When he left, he gifted me a 10.5” Ruger SBH 3-Screw. Ever since, I’ve been meaning to use it to take a deer or a pig.
A buddy of mine said he had pigs coming to his bow blind during daylight hours. 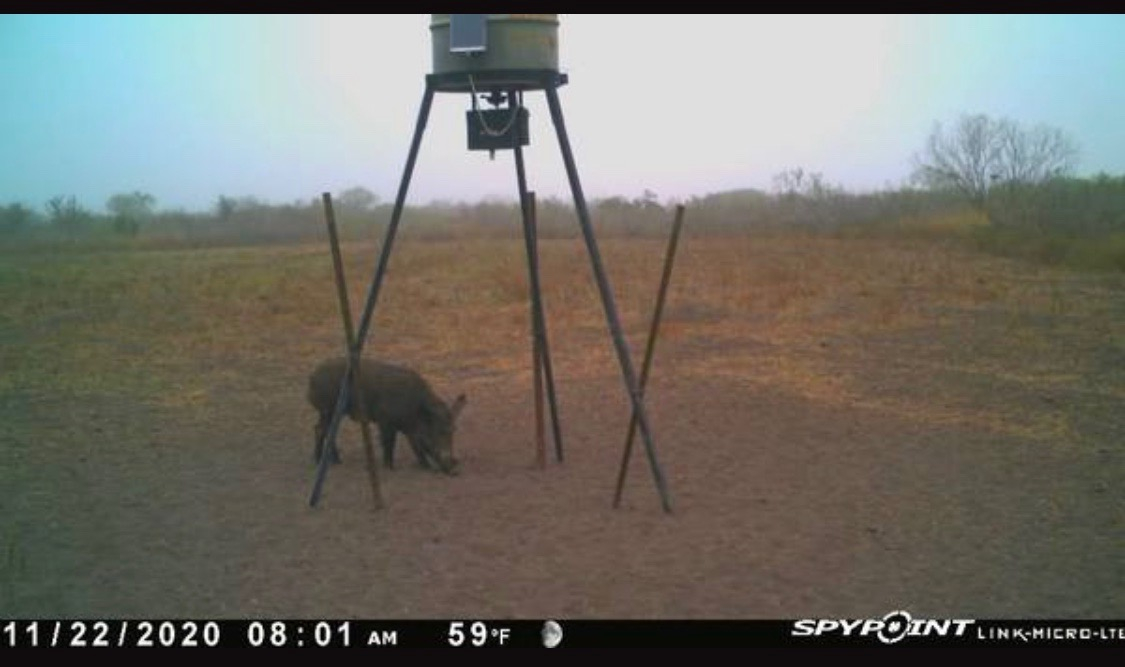 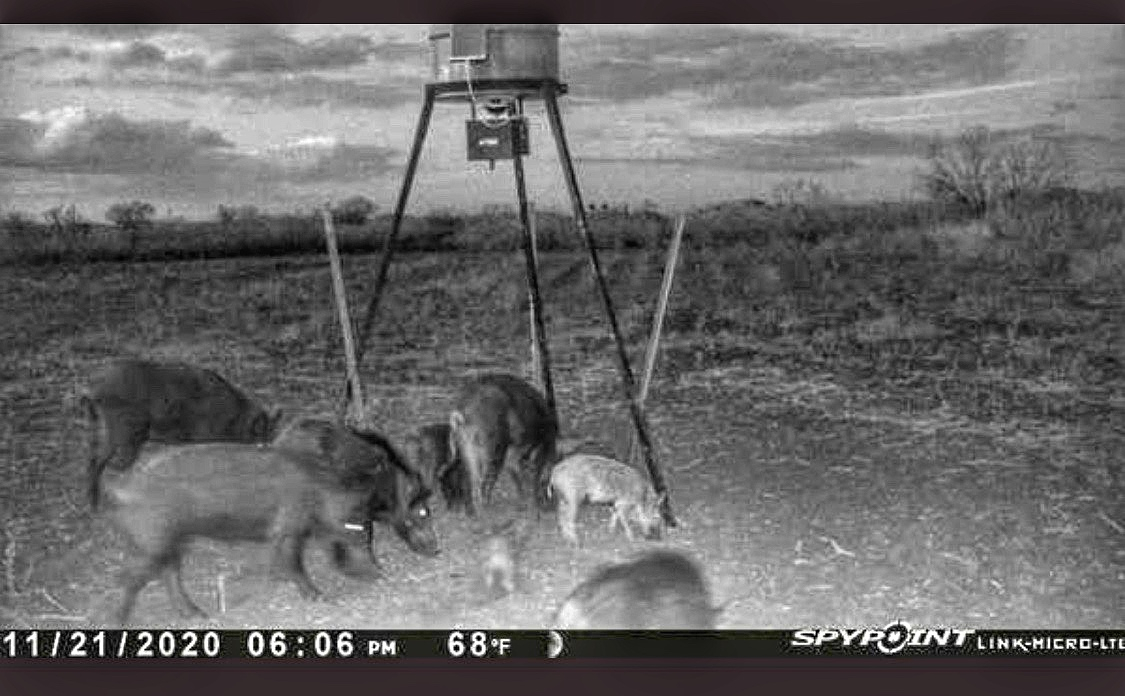 I figured that would be a great opportunity for the revolver.
Judging the lighting conditions, I decided to bring my .404 Jeffery along as well. Being as the 6:06 time frame might be too dark for iron sights.
Some of you might remember the .404 Jeffery my Mentor built and the deer hunt with BigBoreShooter.  How he shot a doe at about 20 yards and the ensuing fun on the forum about which direction the deer was actually standing. Well, he’s the only one to actually take game with that rifle and I needed to fix that.
Showed up at the blind yesterday after practicing using the Pig Saddle with the rifle and revolver. 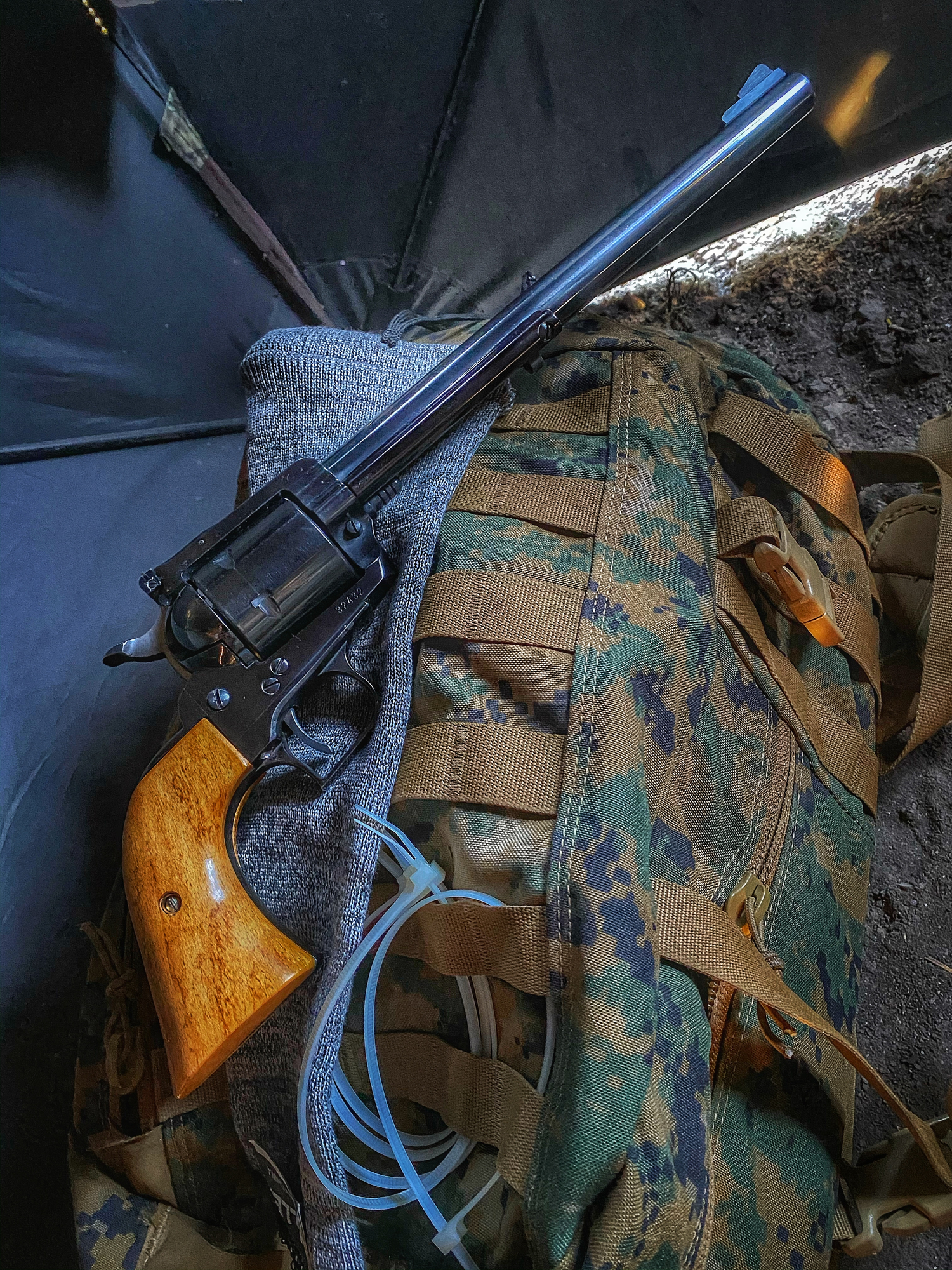 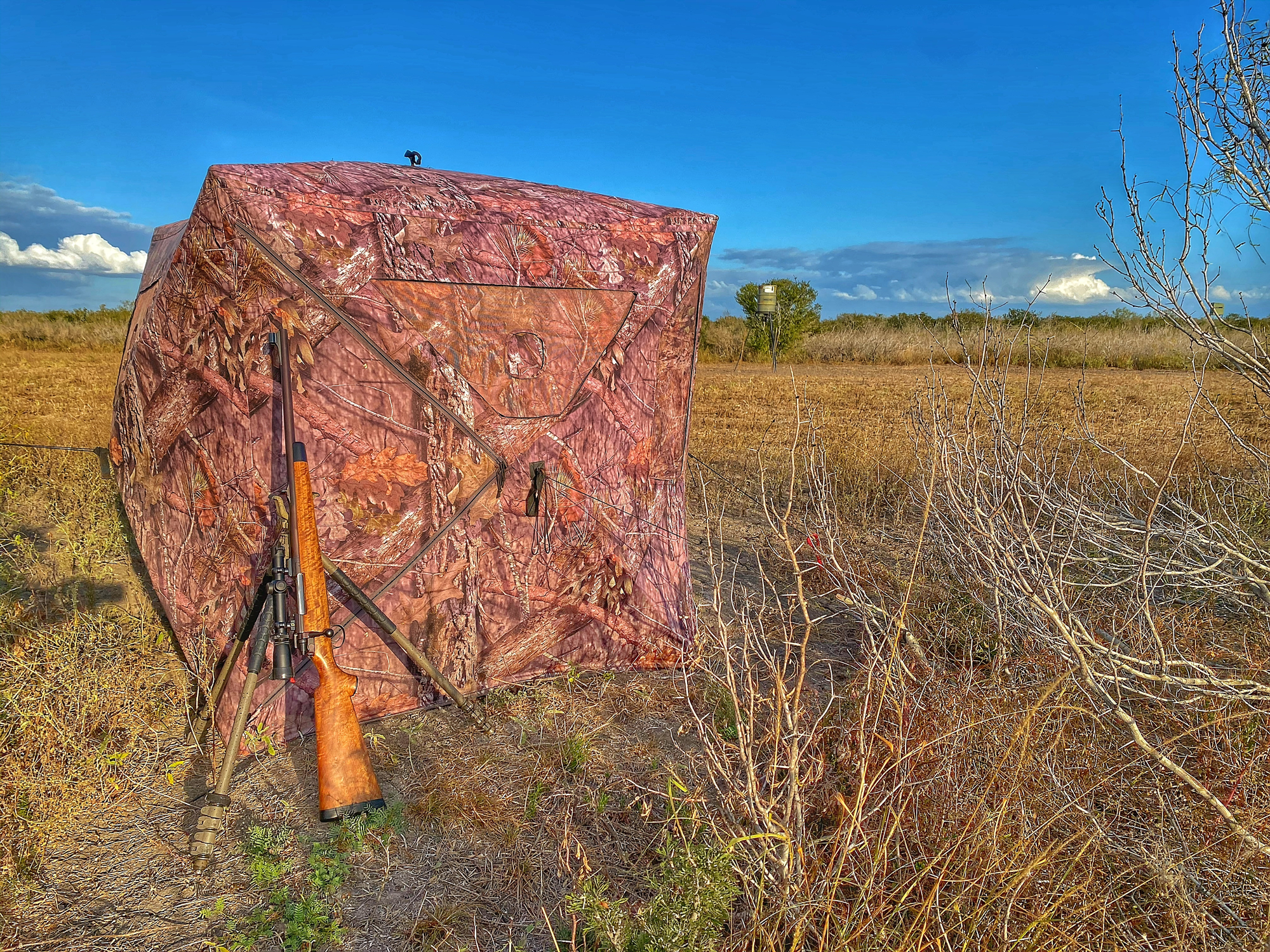 Once in the blind, I realized I was goi g to have to change plans. I would need to use the tripod with Pig Saddle to hold my phone so I could video the hunt. That would leave my BogPod to shoot off of. A much less stable platform as compared to the Pig Saddle. 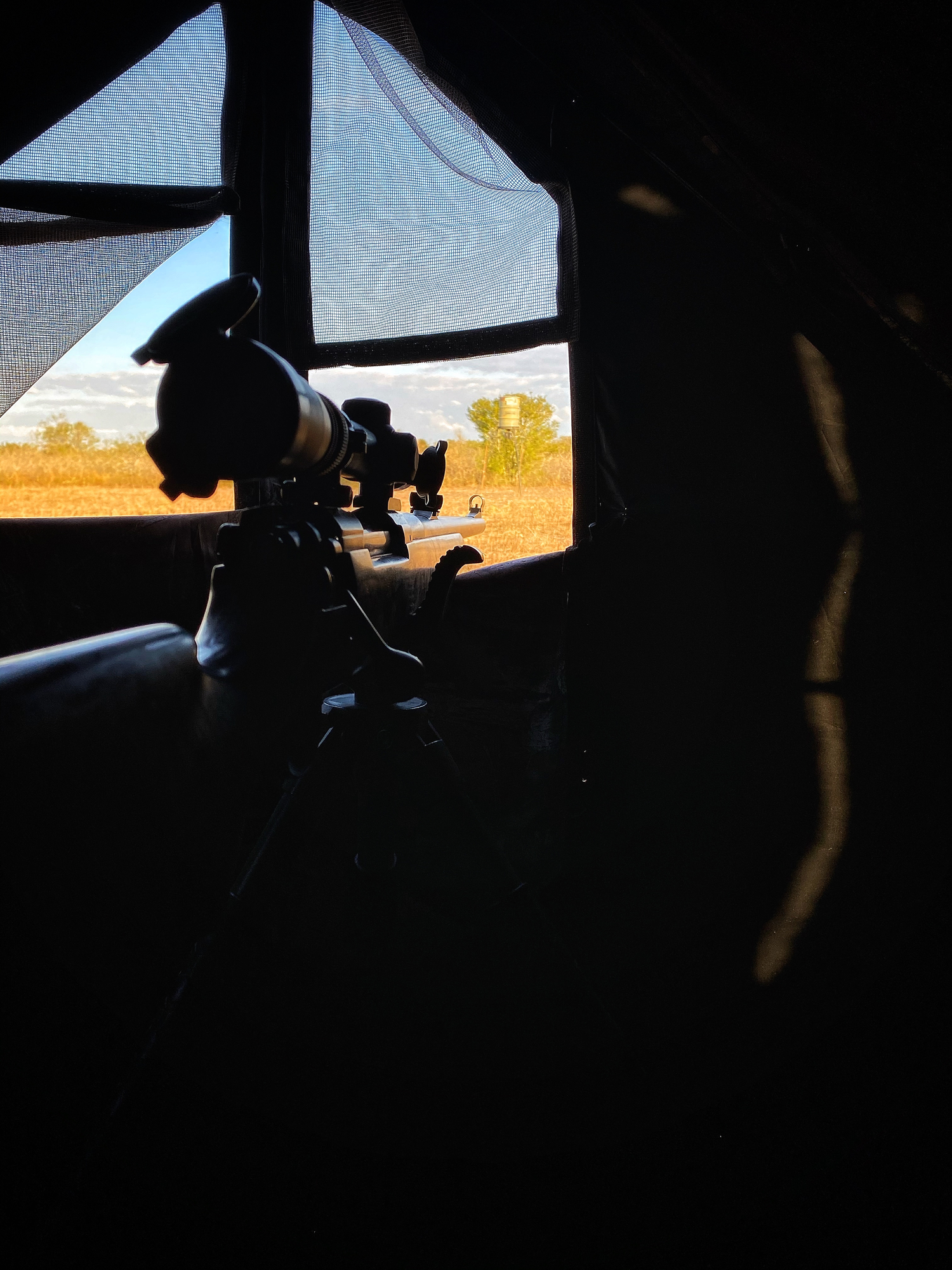 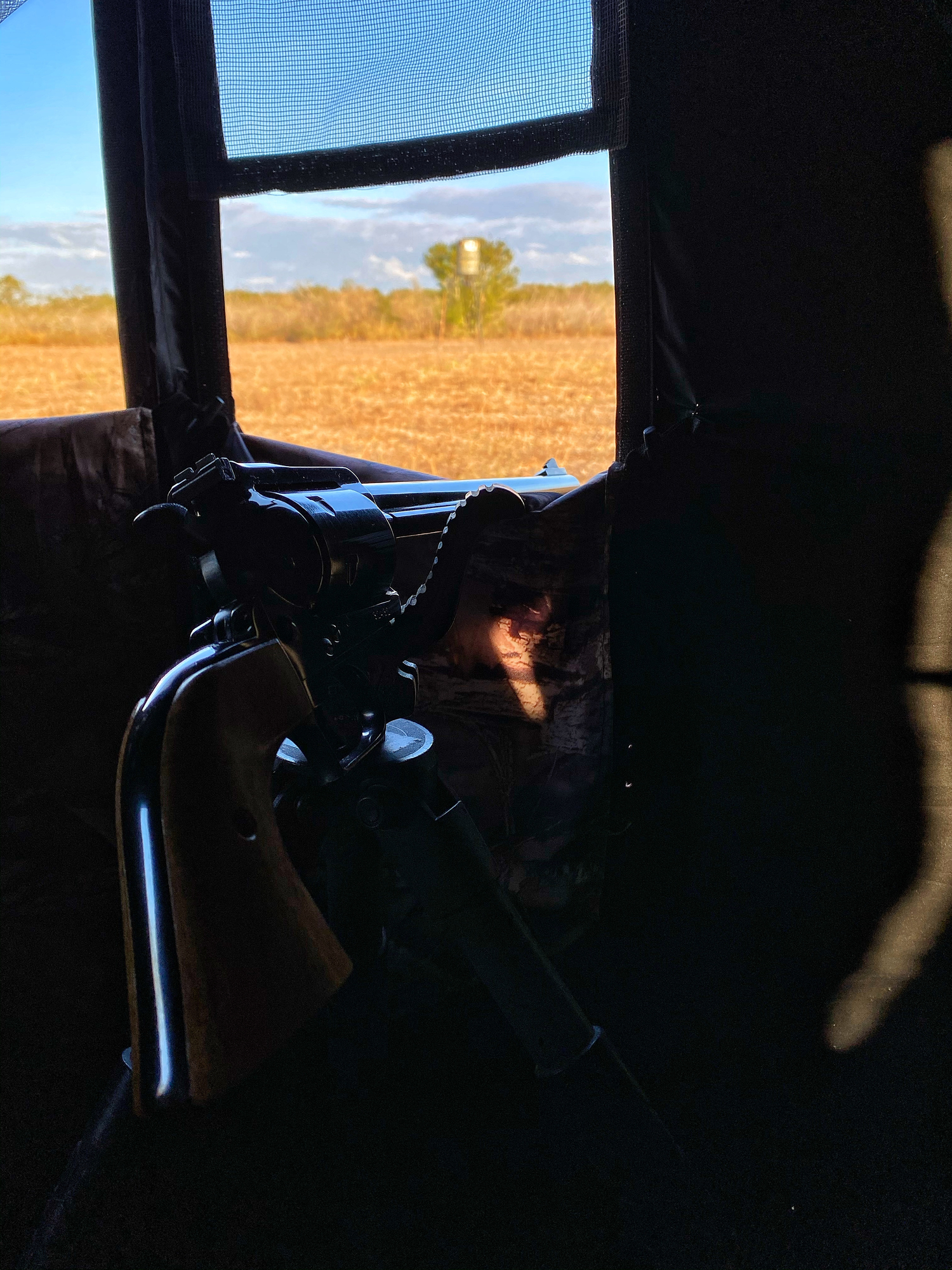 While in the blind practicing aiming with the Jeffery, I see a pigs head pop out of the brush behind the feeder!  Crap!!  Out comes the boar in the first pic above. The Jeffery is in my hands, no hearing pro on, the phone is not ready to video, and the revolver is on my pack.
Slowly, I start rectifying the situation. I put the Jeffery down, put ear pro on, set up the phone to video, and pick up the revolver. Whether it was all the motion or something else, the boar was VERY skittish. While getting ready, he ran off. Then he came back. Just to run off again.
Finally ready, I’m realizing how crappy this tripod setup is for a revolver. Basically, resting just in front of the trigger guard, the gun is a teeter-totter in the V. The front sight rocking up and down in an attempt to remain steady.
Here’s where I went wrong. I didn’t follow one of my personal rules of never accepting mediocrity in a shooting platform. Instead of improving my platform, I felt rushed for fear the pig would run off again and not return. Never break your rules.
As the boar approaches the feeder after running off the 3rd time, he quarters slightly towards me and I try to put the front sight at the base of his neck. At 30 yards, I let fly with a 325gr WFN-GC bullet. Dust kicks up behind the boar and he has what I would call, a YOU MISSED ME reaction to the shot as he spins, runs towards the brush, and proceeds to high jump over about a 4 foot bush. Crap.
I immediately take my phone and look at the video in slow motion. Yep. Missed the Buggar.
You can actually SEE the bullet in flight!! 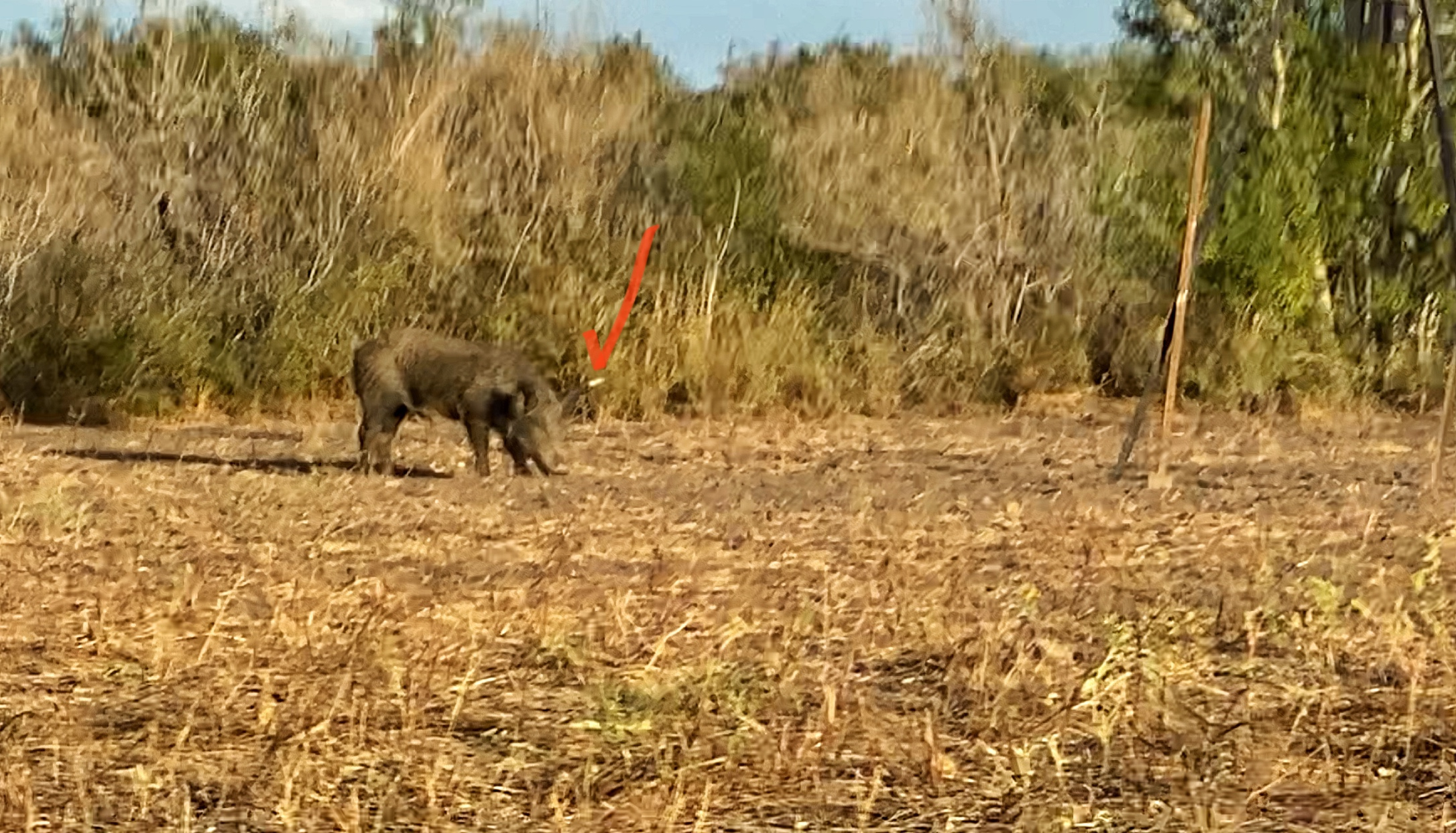 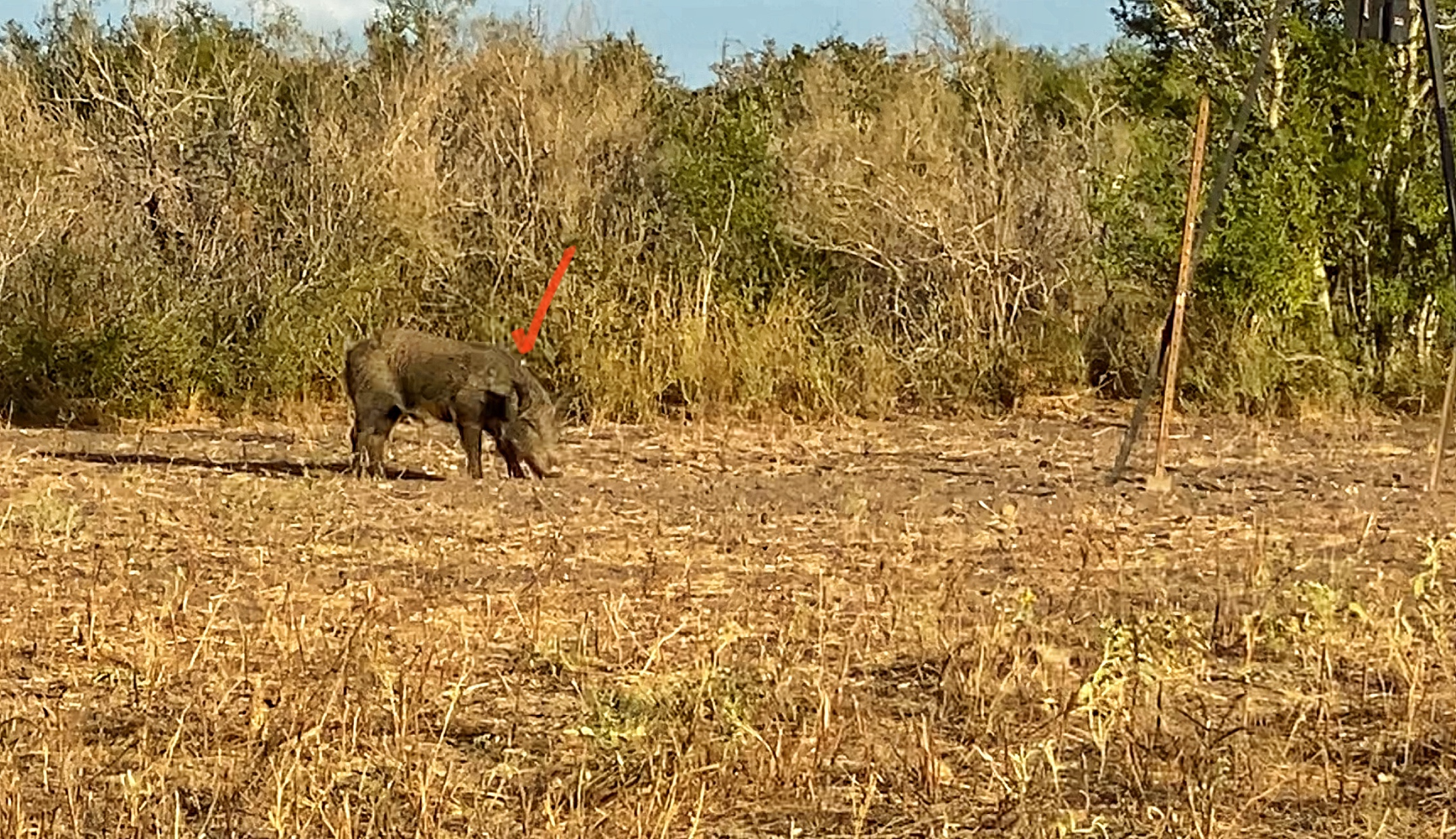 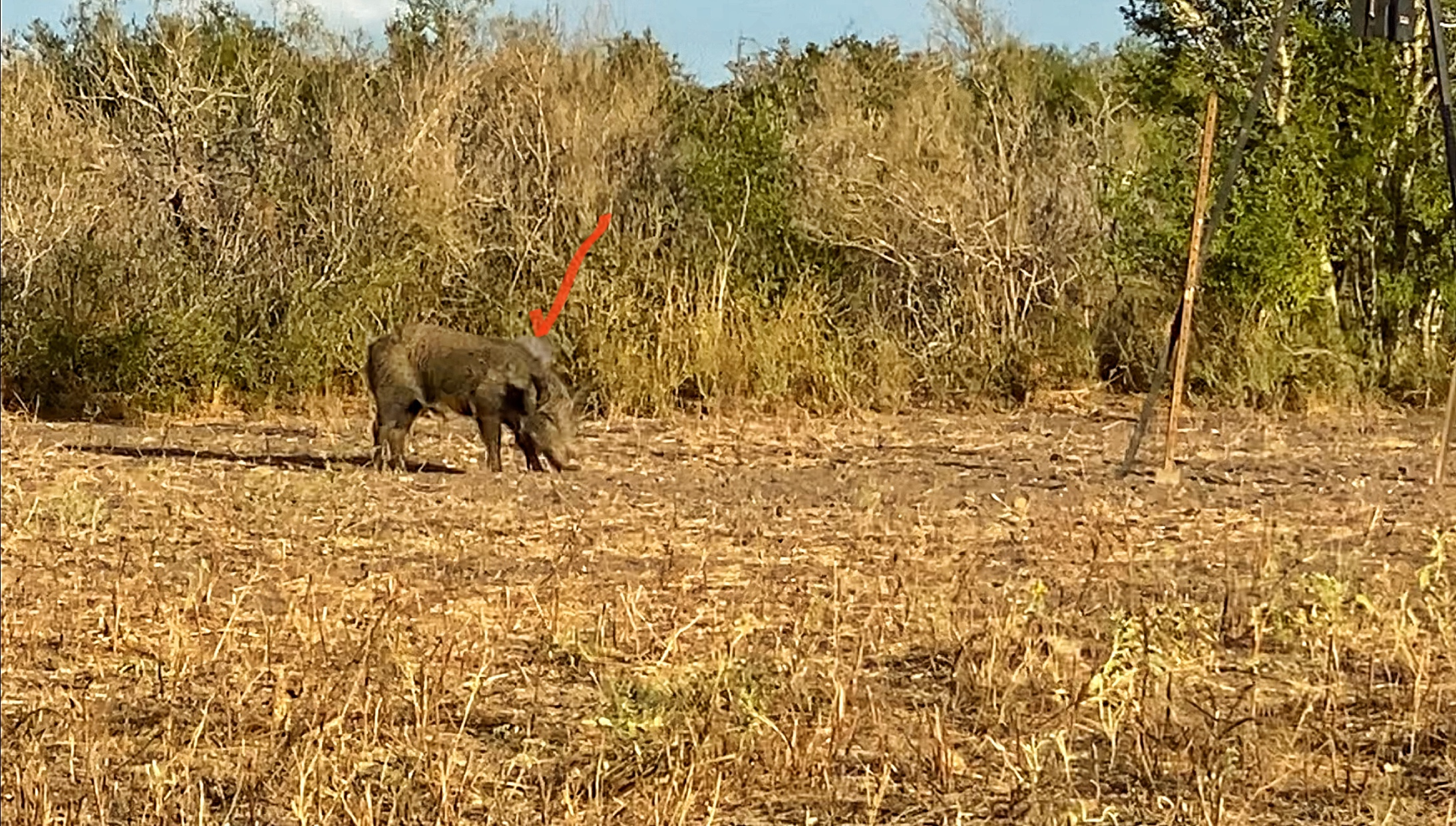 Zooming in in the video, you can actually see the bullet cut a “V” out of the hair on the top of his neck, just in front of his shoulder. Well, close........but not good enough. I screwed the pooch on that opportunity. Damn.
It was still early, so I figured I’d wait and see if the larger sounded showed up.
As time passed and the light faded, it became time to switch to the Jeffery. Then, at 5:56.........the sounder came running in to the feeder. Here we go......
"To Hell with efficiency, it's performance we want!" - Elmer Keith
1 · Share on TwitterShare on Facebook
«12»