shotgunshooter3 Senior MemberPosts: 5,794 Senior Member
November 2020 in Hunting #1
I've started a few threads about equipment and technique in the past year about a Colorado Elk hunt I had coming up. I am very pleased to report that luck was on my side, and the efforts of myself and others paid off, and I was successful relatively early in our hunt! I was able to bag a cow elk on public land in a pretty popular area! 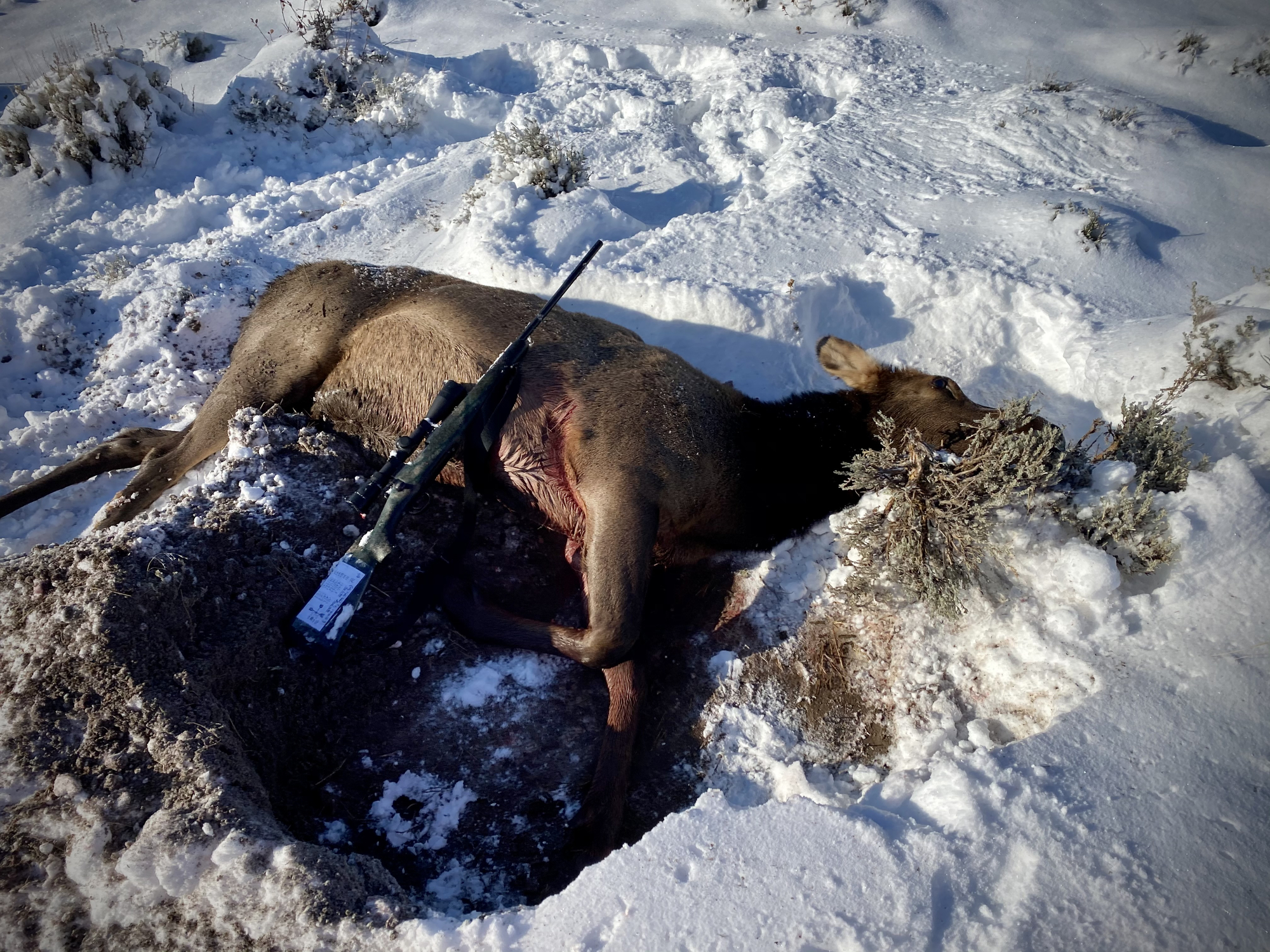 The story isn't particularly epic. It was more so dumb luck, a little dose of "harden the F up," and decision making that yielded success.

For the first two days of the hunt, dad and I hiked into our area from a public access point (instead of the private land we had trespass rights through). On the first light of the first morning I actually spotted a pretty nice bull elk at 250 yards, but by the time I ascertained that it was indeed legal, it vanished over the hilltop. An hour or so of tracking, and it had indeed earned its moniker "ghost of the forest."

So, back at it we were! I linked back up with dad, and we walked, and glassed, and walked, and glassed some more. Probably covered near 10 miles on the first day, and nearly as much the second day. Certainly no rest for the weary as we put boot prints all over our GMU.

Well, maybe there was some rest for the weary.

On day two, a snowstorm was forecasted to hit mid day. We went out anyway, and spent quite a bit of time glassing one particular ridge. I spotted one nice mule deer, but got only a flash of it before it vanished into the scrub oak. Then, like clockwork, the storm set in right on time. We stayed out until we couldn't stand the cold anymore, and packed it in early afternoon. 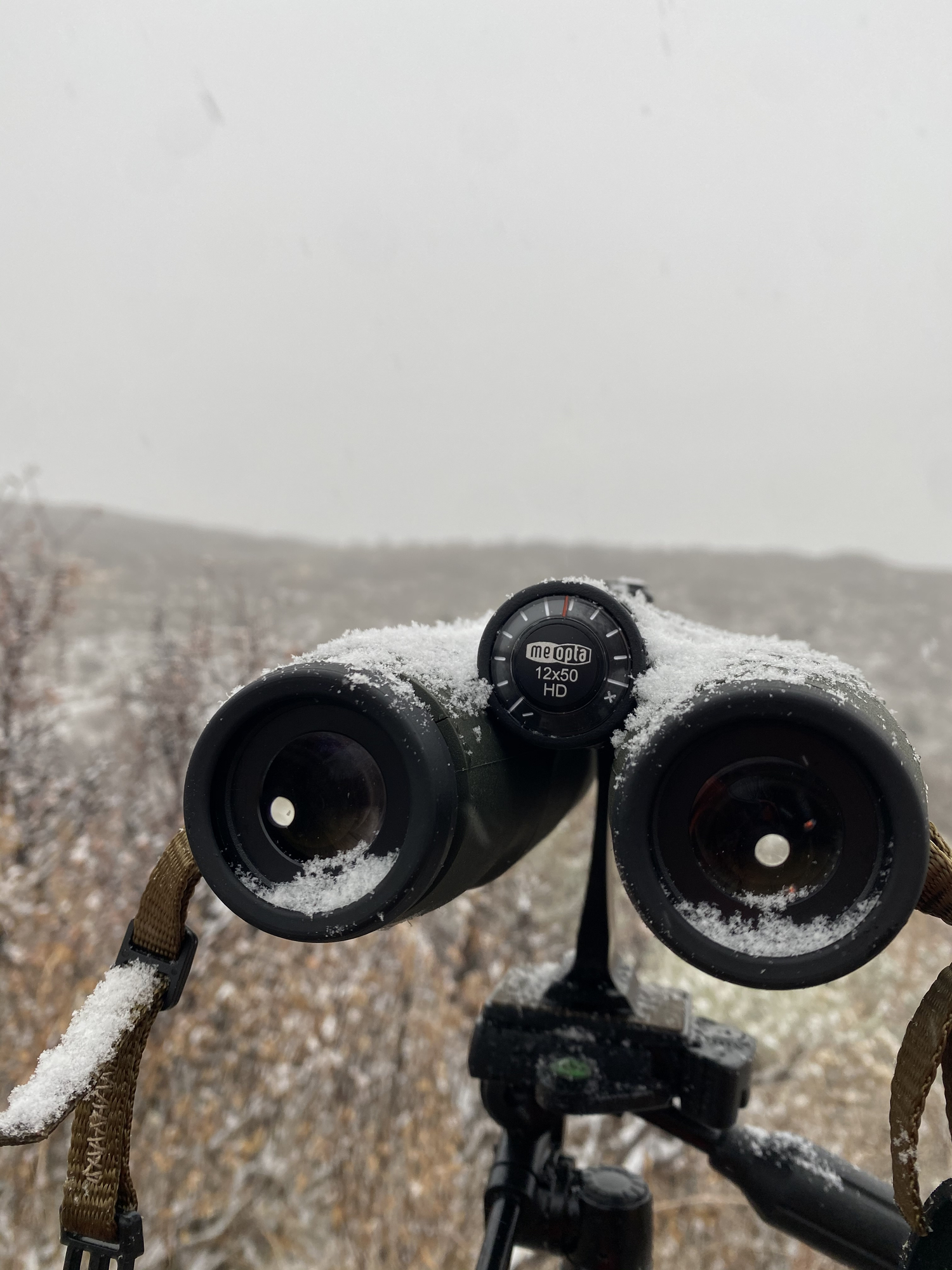 The third day of our hunt, we woke up to 18" of fresh snow. Most of our hunting party, my dad included, decided to stay in until the afternoon. However, something told me I'd regret waiting, so myself and two others set out at sunrise to see what we could see.

I entered the GMU solo from the private land we had permission to cross, and slowly trudged uphill in the snow. If anyone asked me, I was stopping frequently to glass. I was actually stopping frequently because the going was that tough. On my way in, I saw a few small mule deer bucks, but nothing I wanted to shoot that early in the hunt.

Mid morning I found a spot on a hillside, settled in, and started glassing a ridgeline. 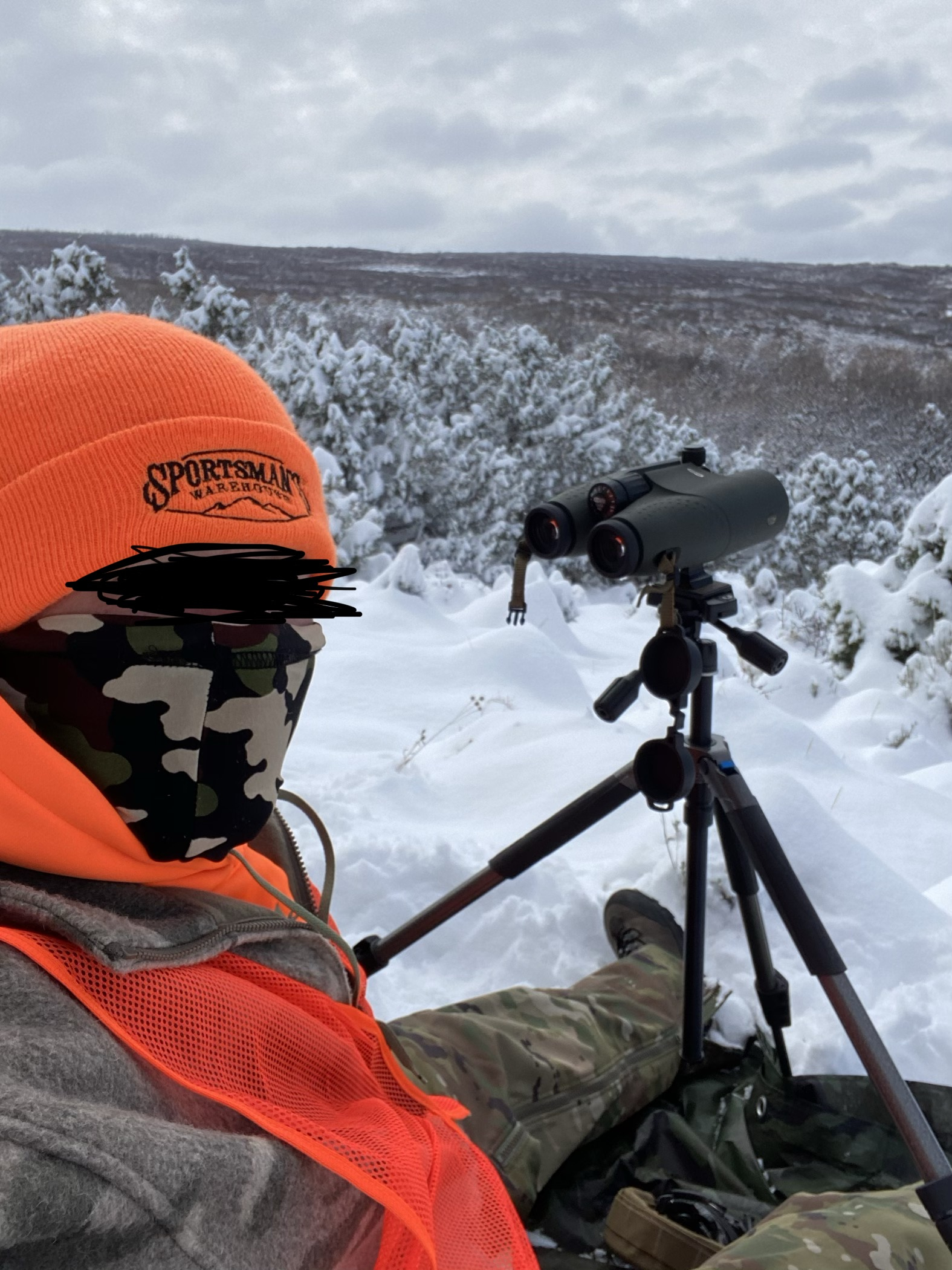 As a side note, a tarp and foam sitting pad are two of the best things I brought on this hunt.

I stayed parked in the same spot for about 4 hours, with variable activity. Mostly mule deer doe moving about. I occupied my time like any hunter would, religiously staying on my binos and systematically scanning the countryside. By that I mean I napped, made Ramen using my Jet Boil, played on my phone, napped some more, and occasionally glassed.

Mid afternoon I'd had about as much sitting as I could stand, so I packed up and started slowly making my way further down the trail. My plan was to keep walking until I had to turn around to get back with some daylight. During this hike I did what any good millennial would do, I checked my phone and with the sporadic reception handled some work stuff that I didn't want to return to after the hunt.

As luck would have it, I rounded a corner to a flat spot (while on my phone) and spotted two elk surprisingly close, just off the trail. I stopped in my tracks and instantly dropped to my knees to reduce my profile. A quick look through the rangefinder revealed that I was watching two spike bulls right at 200 yards away. Since they weren't shootable (4 points on ea. side required for OTC tags), I put the rangefinder away and watched them for a few minutes (mainly for my own entertainment).

Fortunately, my luck continued to build! Just as I was about to get up and start walking again (which would have spooked the elk in the process), I caught movement out of the corner of my eye. When I shifted my focus, I saw what was obviously two cow elk about 1000 yards away in the open. I surmised that they would take the same path as the young bulls, and come right across my line of sight. In anticipation of this, I waited until the two bulls looked away, dropped to the prone (in 18" of snow wearing just a hoody, mind you), "turtled" out of my pack, and scooted forward a bit to offer a better shooting vantage over some bushes. I set up with my rifle across the pack and waited.

Sure enough, as the bulls meandered away, along came the cows, following the EXACT same path. I told myself that the first one that gave me an ethical shot was going down. As luck would have it, the larger of the two gave me a PERFECT broad side shot at 200 yards on the nose (where my rifle is zeroed at). I settled in, put the crosshairs on her, and broke the shot.

She fell immediately, and struggled a bit, her shoulder clearly broken. I chambered another Federal 140gr Trophy Bonded Tip round into my Remington 700 7mm08, and watched for a second. As the other cow hightailed it out of the country, the cow I had shot stopped moving. I stopped for a second to take in the moment, and sent a message to our hunting group chat that I had an elk down on the far end of our area.

Here's a photo I snapped of my gear as it was when I shot the animal, shortly before moving closer. 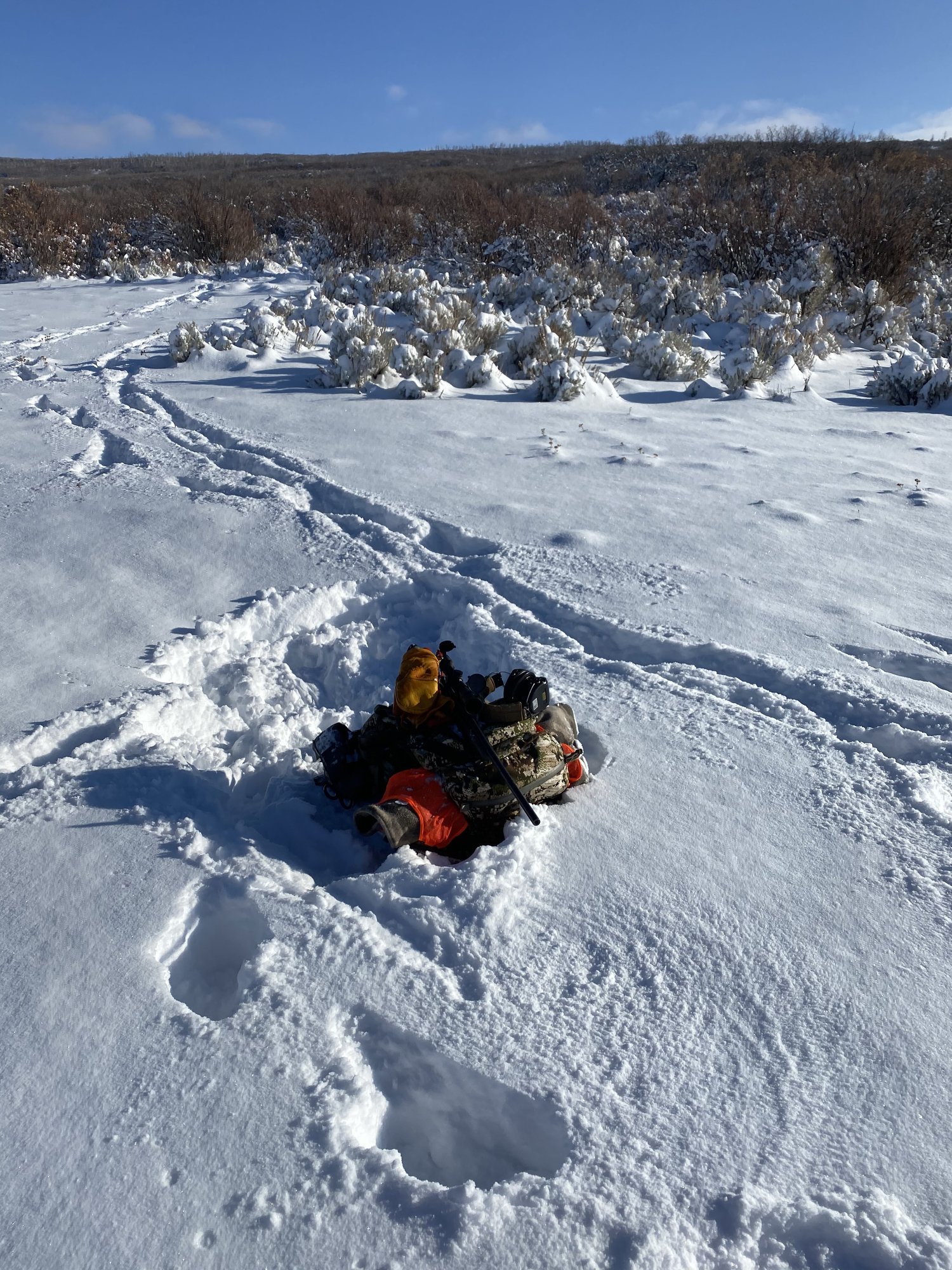 As I walked closer, much to my surprise, she looked up again. She wasn't dead! Damn these animals are tough. I quickly closed the distance and delivered a finishing shot, at which she did expire. I took a momentary pause to appreciate the animal, my fortune, and the good hunt so far. Then I filled my tag, and went to work quartering.

I worked well through sunset, and temps started to drop drastically with the sun. Fortunately, the cavalry arrived in the form of one of the more experienced hunters in our group on horseback. Another hunter in the group, and my dad, were short behind him. Between the four of us we made quicker work quartering the animal and cutting out as much meat as possible.

I don't have any autopsy shots of the round's performance. The temps swiftly dropped below 0 and we wanted out of there. I do, however, have one recovered bullet that I can show. Overall I was very pleased with the bullet's performance, and will continue to use them in my 7mm08 for big game. We finished quartering the animal around 8 PM, and the sun had set into a gorgeous, but frigid night (temps reached -15'F that evening). Fortunately, we had horses and a good group to pack out the meat. We began the 2 mile walk back. Folks, it was so cold our water froze. I am so glad people in my group had horses and were willing to help.

We returned to camp around 10 PM, and much to our fortune the rest of the group had waited on dinner for us! Some folks helped us load the animals into our storage area, and we toasted with Tin Cup whiskey and a good meal.

I am infinitely grateful that I was able to harvest this awesome animal on this hunt. But even more-so than the fruits of my labors, I was grateful for a hugely helpful hunting party and for the opportunity to hit the hills and pursue this animal. It was icing on the cake that my father was able to help with the quartering and pack out.

This is a hunt that I won't soon forget, and we're already gearing up for next year. However, I wasn't the only successful member of this trip. That story, however, is for another thread...
- I am a rifleman with a poorly chosen screen name. -
"Slow is smooth, smooth is fast, and speed is the economy of motion" - Scott Jedlinski
4 · Share on TwitterShare on Facebook
«12»