Bigslug Senior MemberPosts: 9,047 Senior Member
January 2021 in Clubhouse #1
Is it even possible to count the levels on which 2020 SUCKED?  On top of everything else that's been on the big national screen, my wife and I lost two of our cats, another had serious dental issues that took all his teeth, and my Mom and Dad lost four (all) of their dogs.  The last was an older shelter rescue dog that was about the sweetest thing you could imagine.  They only got to know her and give her a great home for about 10 months before cancer was confirmed a couple weeks ago and ended it.  Truly one of those cases where you try to smile because it happened instead of cry because it's over.

Suffice to say, everybody's world got a bit rocked by all of that.  So I guess these guys are the therapy: 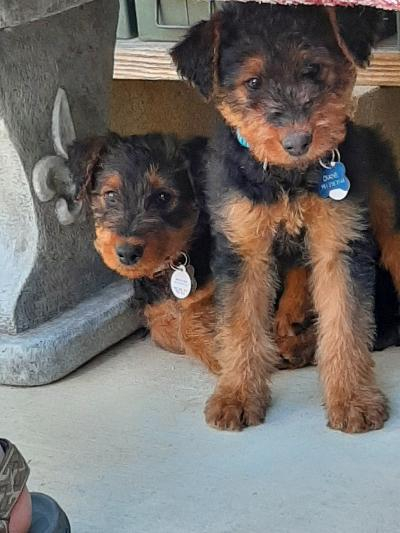 Dad always wanted Airedales and after the loss of the next-to-last dog (his close pal) figured it was time to research breeders.  I got invited over to their place yesterday to help advance the socializing process (We're all serious buds now

).  8 week old brother & sister, Jack (lying) and Bailey (standing)  The hope was the last old dog would get to help raise these guys, but timing with arrivals and departures just didn't allow for it.

There's been damn little to smile about this last year.  Being swarmed by bouncing, licking, cuddling, sleeping pups is a nice change!
WWJMBD?