orchidman Senior MemberPosts: 8,367 Senior Member
April 2021 in Hunting #1
Headed up to the property where we have been culling deer for the last few years as the Fallow are rutting at the moment and this big Buck has eluded us the last 3 trips....... 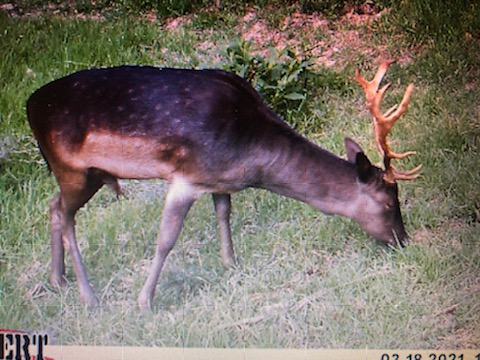 The first time I saw him I was scoping out a few gullies with the Binos so that I could call Bloodhound and D by radio to give them directions to any deer I could see.. While using the binos with my rifle at my feet, I saw a movement about 20m in front of me and as I slowly lowered the glasses I saw this big buck meandering through the bush. He had his head down so I slowly reached down for my rifle, raised it to my shoulder and just as the scope came in line he raised his head, looked at me and scarpered before I was lined up. Round 1 to the buck.
Saw him again 2 weeks later as we busted him from where he had been laying up but none of us had a shot. Round 2 to the buck.
So this afternoon we headed back up to see if he was 'roaring'.
We split up on arrival and went to hunt different areas, planning to meet up on dark.
I saw 3 does on my armed tramp but no buck was in attendance so I headed back to meet up with D.
I stopped at the vehicles to pick up my rifle light and lithium battery and continued to where D was. I set up the light on the T3X 243 and we decided to wander around the top of a big basin on our way to meet BH.
I walked out onto a spur that overlooked the basin, switched the rifle light on and scanned the area below the ridge we had just walked. Nek Minit I see a pair of eyes light up about 90m away, raised the rifle, aquired them in the scope and saw a black wild cat stalking down the edge of the bush into the basin. Closed the bolt and sent an 80gr PSP ( factory Remington load) on its way. At the shot, the cat leaped and turned somersaults before crashing into the scrub edge.I also saw a second set of eyes on the edge of the light beam about 15m below where the cat had been. When I swung the rifle and light ( The light is clamped to the barrel) the eyes went out. I dropped to a sitting position and kept watching through the scope and about 20secs later the eyes were back. Initially I thought it was another cat as I could make out a grey shape behind the eyes........ but I then realized it was a deers head poking out from underneath a bush. I sent another 80gr Psp on its way and was rewarded with a solid thump of a hit which turned its eyes off. I chambered another round and waited a few seconds to be sure and then the eyes lit up again so I sent another bullet on its way. This time the deer reared up, fell over a bush and rolled 5 metres down the hil where it remained motionless.
D and I made our way over to the deer which was a young spiker. When we got there the deer looked like it had gone 10 rds with a heavyweight boxer.  We dragged it to level ground and I field dressed it out.
On closer inspection we found...........well a picture is worth a 1000 words so here are the pics I took.....

In the next pic you can see a large wound on its flank which had pierced its stomach, a wound on its front left shoulder which appears to be a second  puncture wound and 2 more wounds on the top of the shoulder and neck.

Turning the deer over we found the front right shoulder Humerus bone had been dislocated from the scapula and was poking out through the skin.

You can see from the pics the deers coat looked like  crap, with large areas looking like mange and other areas scuffed and torn. When I field dressed it I noted that its stomach was almost empty and the whole deers condition was terrible.
Some of the wounds had already scabbed over and were leaking pus while others only looked like a few days old. We came to the unanimous decision that it would not be advisable to keep the meat and laid him to rest in the scrub.
Looking back at what happened, I noted at the time I saw the cat, that it appeared to be in full stalking mode and what we believe happened was the cat ( which was approaching the deer from downwind) had smelt the deer ( or the taint of rotting meat) and was intent on getting a free feed believing it was something dead but edible.
We are also pretty sure that the young spiker had run across the big buck while the buck was 'courting; his ladies and had received a thorough thrashing for having the temerity to try to 'get some' himself.
I guess its now Round 3 to the buck.
Apologies for the feet in the pic btw...If CPJ saw them he would be having conniptions!
Still enjoying the trip of a lifetime and making the best of what I have.....
1 · Share on TwitterShare on Facebook