Ernie Bishop Senior MemberPosts: 8,545 Senior Member
March 1 edited March 2 in Hunting #1
Besides the headshot, that I mentioned in a different thread with a 223 Remington bolt action rifle, probably the most rewarding and unique hunting I do with Zee is when we go after hogs.
There is just so many things that are so different from what I typically do, and that’s what makes it so fun.
All three of these shots were made from the standing position with a tripod.
I believe this is the first time I’ve ever used a tripod on a rifle for hunting.
The first time we went out, we ended up spotting a good sized pig, and then began to make our way to him.
The wind was basically blowing in our face, and was blowing fairly hard, so we were able to get under 50 yards to make this shot on him. He ended up weighing 208 pounds. Zee guessed  213 pounds, if I remember correctly and I was way under the mark. I kind of stink at guessing the weight of an animal.
Remington 700, McRee chassis, 16 or 16.5 inch barrel (8T???). Shooting Hornady TAP with 168’s (Of Course!).
Zee finished him off with a blade on his throat. 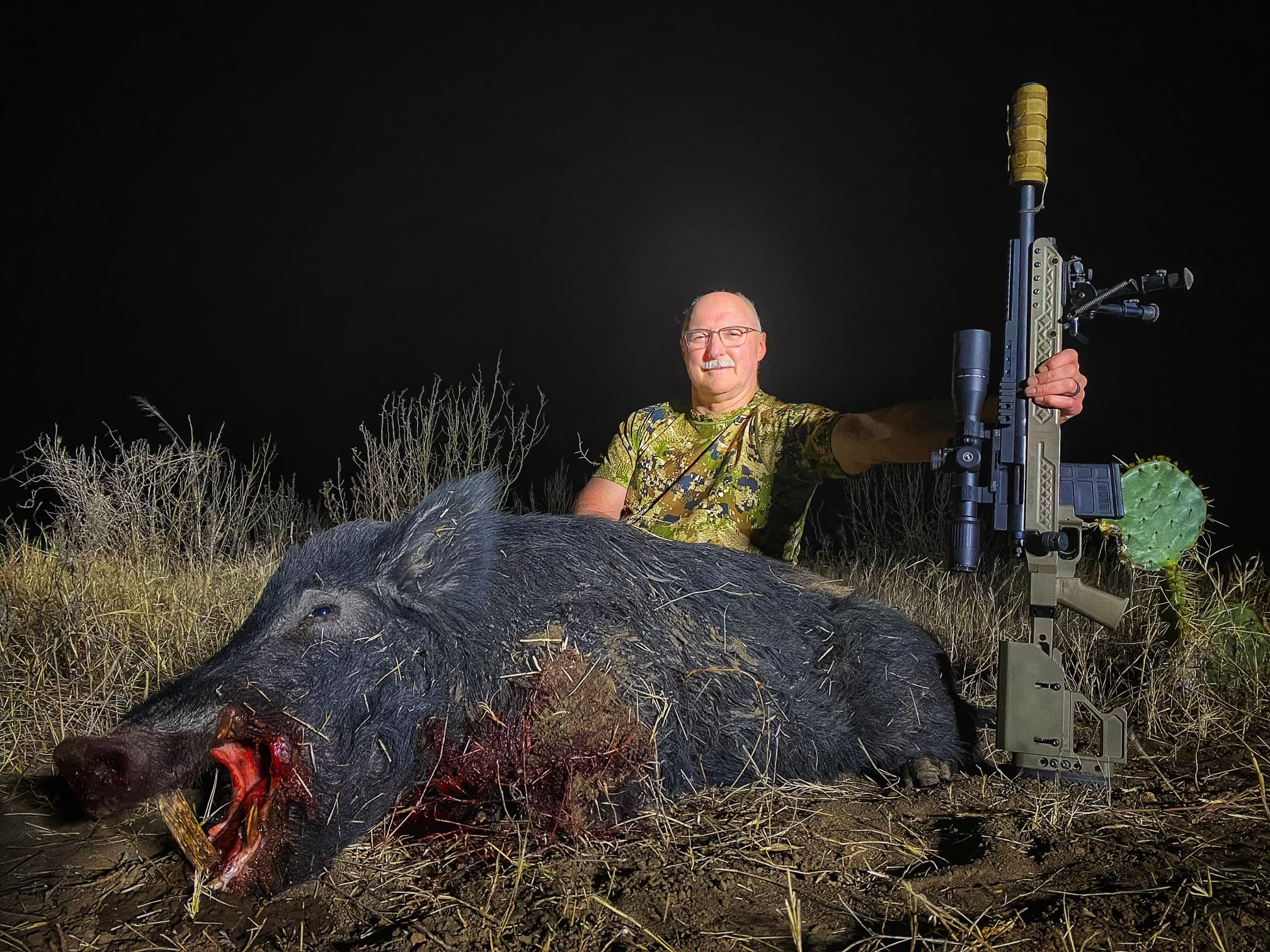 Zee has more pictures of when he was working him over with his blade.  I don’t have any of those on my phone to share at the moment.
Zee is really good and fast with a blade when it comes to working on animals. I just enjoyed watching him work the meat and the hide. This was Tuesday night.
on Wednesday and Thursday evenings, we saw absolutely no pigs. On Friday night, we decided it was going to be “Pig Night!”
after that was decided, we had some request for hog meat, and that put a dent in our plans, because now those animals will need to be brought in and feel dressed to go to the local locker. We only went to one place that night, and we immediately saw several hogs.
The were sows in the 100 pound range.
Depending on the movement of the animals I would set up on the one to the left, then when switch to the one on the right. Distance was around 100 yards.  Ultimately I had a shot at the one on the left, and at the shot, she went down immediately, and the one on the right took off running, and I was tracking her as she moved. She ran 40 yards or so maybe a tad further, and then stopped. I knew that I literally had seconds to shoot before she took off again, and as soon as the crosshair (not a traditional cross hair, but the one that Trijicon uses) got on her, I sent it and we heard the meat report and you could tell that she was hit and she took off and went into heavy cover. We did not recover the second pig.
I know that my shot was a little far back, but I am convinced she would not survive the ordeal, and it would be one less hog for the farmer to contend with in the future-Score!
The first pig never moved at all. I was shooting one of his AR-15’s (223 Remington) using some different bullets, for testing purposes.  The bullet I used used for the hogs with the AR, worked great on both deer (other people using them) and hogs. 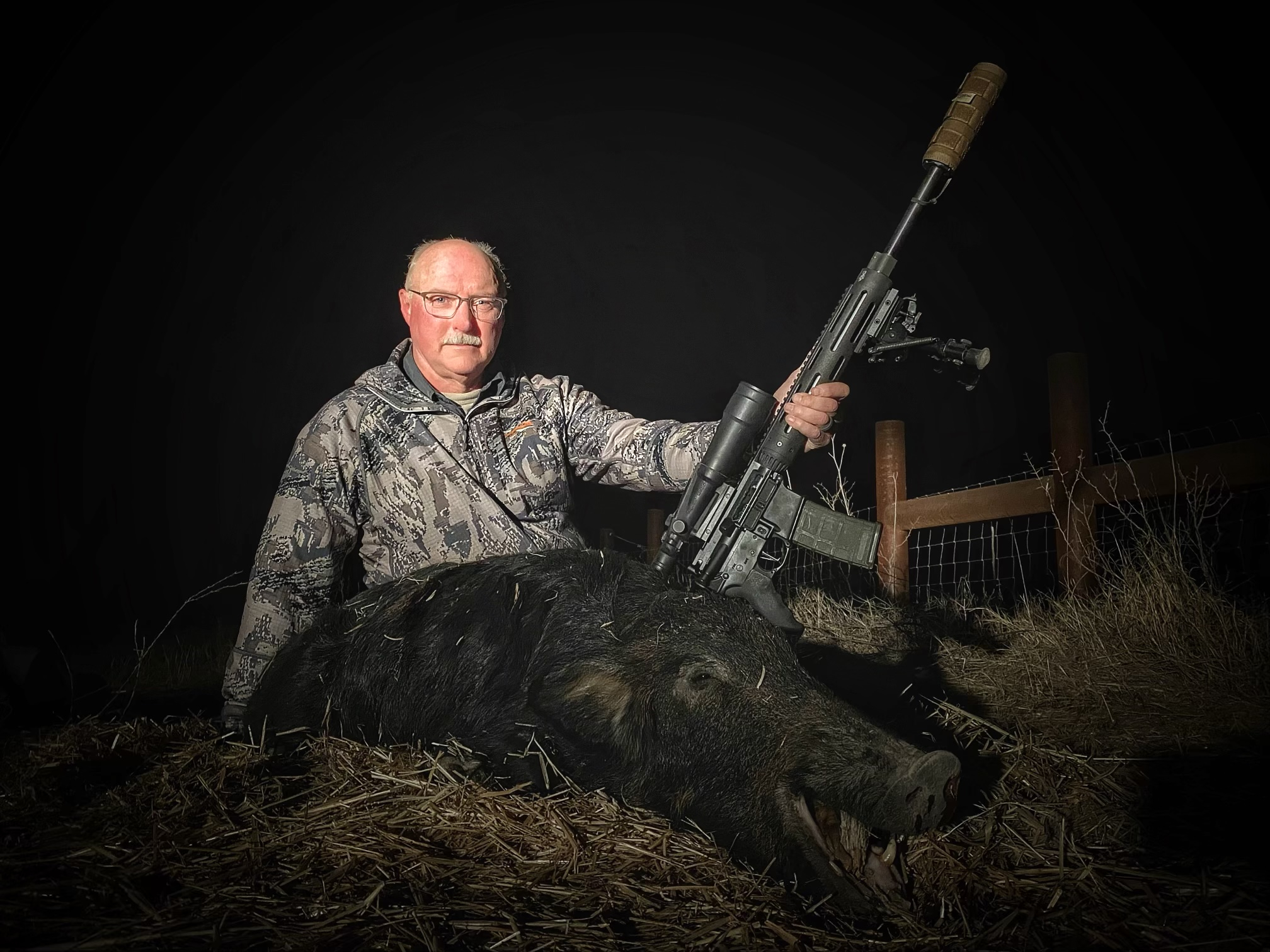 The most exciting thing of the evening was trying to get out of the way of a very angry mama cow. There was a moment in the midst of all of that excitement, that I was thinking, if this gets a little more intense, this is really going to hurt

I am sure that if there had been a video of this experience, it would be very entertaining for everyone who watched it.
Zee will post what other pictures he sees fit and or give more detailed explanations.
So Much Fun!!!
Ernie